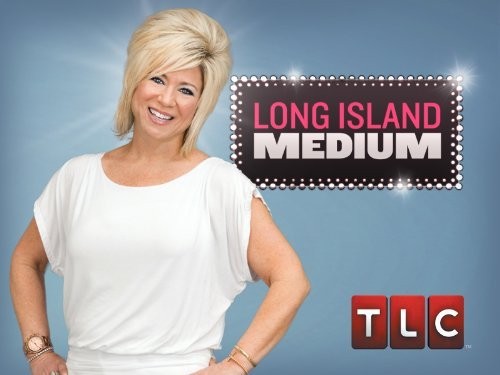 On the last episode, Lady Luck was a lady named Theresa Caputo! Theresa was on the road surprising lucky fans with readings in Las Vegas! The whole Caputo family came along and takes in the best Vegas had to offer. the first of a two-part season premiere, the Caputos mix business and pleasure in Las Vegas, where Theresa interrupts a woman’s recording session to help her connect her mother, and another woman gets a surprise at her bachelorette party. Did you watch the last episode? If you missed it we have a full and detailed recap, right here for you.

On tonight’s episode, in the conclusion of the season premiere, Theresa and her family are still in Las Vegas, where a woman’s deceased son makes his presence known during a reading; and another woman’s early arrival could spoil Theresa’s surprise. Elsewhere, the Caputos go for a hike in the desert and try indoor skydiving.

Theresa is on the road and currently in Las Vegas and while she was there, she happened to hook up with an old friend of hers who was performing there in the Drag Queen production “Divas”. When she was paying her friend a visit backstage in order to wish him luck – she caught one of her “feelings”. And Theresa was never one to ignore a feeling.

She was sensing a man’s presence and asked the people backstage if one of them lost a brother or someone like a brother and someone said yes. The man that answered lost his best friend to cancer four years ago and he’s still deeply grieving. So it was nice that Theresa was able to offer him comfort. She told him that his friend is watching over him and it gave him some peace of mind to learn that his friend/his brother in all but blood never really left his side. That it was still them going through life together.

He quickly was brought to tears afterwards and luckily for Theresa this was nothing new. She’s used to strong reactions from those living. It’s never easy for them in being confronted with the other side.

And later on that explained Lisa’s strong reaction after she learned her daughter had arranged a private reading with Theresa. Lisa apparently was a big fan of the show and so upon seeing Theresa, in person nonetheless, she burst into tears. It was very emotional.

Though there was a reason she wanted to meet Theresa and that was her mom. Lisa’s mother died a while ago and she hasn’t been prepared to let go. Lisa had been feeling guilty that she didn’t know how sick her mother was until it was too late. So the woman blamed herself for noting being around more.

However Lisa’s mother assures her, through Theresa, that she never wanted Lisa to know how sick she was. It would have ruined the little time they had together. Her mother wanted to die on her own terms and keeping her daughter in the dark allowed that to happen.

It was hard to hear but it was also time Lisa let go of the guilt she’s been holding onto – her mother doesn’t want that for her. And Lisa ended up not being the only person Theresa connected with a parent. When Theresa and her family were sightseeing around Las Vegas, the legendary medium got a reading off of her tour guide. It seems he lost his father to throat cancer during his early twenties and during his father’s last months – the older man was unable to communicate with his son due to first the cancer and later his comatose state. So Theresa had to be the one to tell her tour guide that his father is proud of him. Has always been proud of him and that it amazes him to see what a wonderful his son has become.

And the tour guide was grateful for Theresa offering him that. He’s been in the business for a while and he’s never met a person like Theresa.

Theresa had another scheduled private reading and again it was a surprise. Two women, Jeanalin and Sabra, wanted to shock a group of friends by introducing them to Theresa. And Jeanalin nearly gave her friend, Gil, a heart attack. He was so giddy at seeing Theresa that he felt his friend must have hired a Las Vegas impersonator.

It took him a minute to realize no one was playing tricks on him and that really was Theresa. So it was only fair that the first reading went to him. His mother was very vocal about wanting to reach her son hence Theresa couldn’t have stopped her even if she wanted to.

Gil’s mother passed way after suffering a brain aneurysm one day and Gil was the one to call for help. But he then had left her side to go to class. At the time, he thought everything was going to be ok and it wasn’t until the priest came to get him after fourth period that he learned she had died while he was in class.

So there’s this part of him that’s regretted going to class instead of going with her to the hospital. It had made him feel like he missed out on his last chance to say goodbye and Theresa had to be there for him. She told him that his mom didn’t see her death coming and that nothing Gil had done that day would have changed the outcome – she was truly already gone.

Then there was the woman who lost her brother whom she had raised like a son and the woman who did lose a son. Both of these women had worried that about their men’s final hours. Whether they were in pain or if they had thought about them. And the answer was that the pain was over relatively quickly. They don’t want those they left behind to be hung up on the way they died.

They just want to be remembered as the person that loved them and was loved by them.

A lot of the times Theresa runs into skeptics but the fact that she helps people no matter what should be what she’s known for! Not everyone was given a chance to say goodbye and even if they believe in mediums – they still deserve closure!