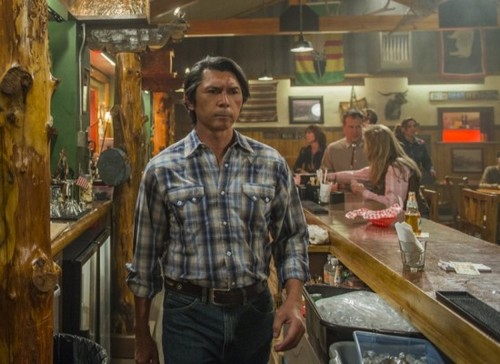 Longmire airs tonight on A&E with another episode of season 3. On tonight’s episode called “In the Pines,” Walt and the team search for missing teenage campers.

On the last episode Walt Longmire juggled a murder investigation and his duties as a fill in judge for the Miss Cheyenne pageant. Meanwhile, Cady Longmire looked to an old friend for help with Henry Standing Bear’s case. Did you watch the last episode of Longmire?  If you missed it, we recapped it all right here for you.

On tonight’s episode after a wilderness leadership trips takes a dark turn, Walt Longmire and the team must track down a killer and missing teenaged campers. Branch continues his unsanctioned pursuit of his shooter.

Tonight’s episode begins with Walt sifting through pictures and profiles of criminals while Branch seems to be performing some sort of ritual that involved killing a rabbit, cutting off some of his hair, and dripping blood on both as he lights it on fire.

Later, Vic, Walt and Ferg head out to the mountains after receiving a call from campers who are part of a leadership program after there is a body at their campsite. The man was murdered. After an initial investigation, Walt has Ferg take the campers back to the station and explains that they will need to search for the other missing campers who are not back at the campsite yet.

Back at the station, Vic’s husband pays a visit to Walt and shows him pictures of he and Vic at the motel. The pics were left on his door. Walt explains that this was during an investigation that required they go to Arizona. When Walt asks if he had Vic followed he denies it, saying that he believes Ed Gorsky took the pictures. Walt assures him he has nothing to worry about as far as he and Vic are concerned.

In the woods, Ferg stumbles upon a tent that is moving and discovers a couple is enjoying their own type of adventure. He pauses to wait for them to ask a couple question then moves on to discover some abandoned property that is likely a clue in the case. At the station, Vic and Walt are talking to some of the campers and they give the name of a possible suspect.

They explain that he has had some strange tendencies and is often going off on his own; somewhat antisocial. Just then, Walt gets a call from Ferg and he and Vic head back to the scene. As they look around they hear a cry for help. Walt gets as much rope together as possible then connects it to handcuffs as they lower him down the mountain where he finds a girl’s body. He puts her on his back and they pull them both back up.

Shortly after, Walt is at the hospital waiting to hear the girls’ status. He speaks with the doctor briefly when the doctor shares that he should have the DNA test results soon. Walt has no idea what he is taking about…and then finds out Branch is still working on the investigation of his shooter. Walt is not happy that Branch is doing this behind his back. Ruby gets a call that Standing Bear/Henry has gone out of his authorized area as his monitor detected it. She says she’ll send someone out.

Walt speaks to the girl in the hospital and she describes her experience and what happened. She explains that she believed she was going to get raped after she heard Wolverine coming because he had made sexual remarks to her before and he was caught going through her bag. She ran to get away and fell.

Branch finds Henry walking on the road and tells him to get in the car. Henry cannot stand the fact that he has only a one mile radius to live in. Branch asks about where he can get peyote. Henry asks if he plans to use it to go back in time to try to identify his shooter. He says he needs it for a case and is looking for buyers. Henry is reluctant to give him any information and expresses concern for him.

Vic is having flashbacks of a very passionate encounter with Gorsky. She gets upset when thinking about the vivid memories.

Wolverine’s mother is at the station to see Walt and find out what is going on with her son who is missing. Walt starts asking questions about her son’s personal life, his friends, etc. The woman gets a call from her son and though she denies it, Walt can see the area code and how suspicious she is acting and knows he is trying to reach his mother. When she lies to Walt about the caller, he demands to see her phone. She throws it to the ground and crushes it before he can grab it. He puts her down on the couch and she looks defeated.

Walt talks to Branch about the DNA test. There was a positive DNA match to the ashes and Branch’s blood. Walt is starting to understand and sees that Branch thinks that David faked his own suicide. Branch shares some more of the proof he now has after his experiment in burning his own blood. Branch asks if they can reopen the case and Walt agrees, but not until after the camper investigation and Branch takes a few days off.

They both agree and Walt leaves to go meet with Wolverine. He denies any involvement and proves he obviously had a problem with Adam. Walt shows him the notebook of his that they recovered with a drawing showing the way Adam was murdered. Wolverine tries to shed his viewpoints on Adam, and while he is obviously bitter about Adam, he says that he is not the killer.

Vic comes in and says that it seems as though Wolverine was right about Marshall. They talk about Wolverine and Marshall when the conversation turns to Gorsky. She confirms she knows what the number on the back of the picture meant. She knows he left the picture for her husband because the number on the back is the hotel room number where they had a few trysts. She ended it, but obviously he still has lingering feelings about it.

Walt questions some of the camp leaders. Walt shares that Adam lost control and someone got revenge. Walt is pushing Susan to tell him what he knows about Adam. Her partner yells as he storms out that Adam was a liability. Later, Vic and Sean talk and he tells her that he believes that nothing is going on between her and Walt, but she just looks so much happier in the pictures than she’s ever looked with him.

Walt gets Susan’s husband to open up about his wife’s love for Adam which leads Walt to determine he is the one who killed Adam in a fit of jealousy after seeing his wife with Adam again. Walt offers the opportunity for him to tell his wife personally, otherwise he can do it.

Walt obsesses again about the man who murdered his wife and pulls out the pictures and profiles of potential suspects. Ruby tells him, after walking in on him putting the pictures up, that when he finds the man, he hopes he hurts them.