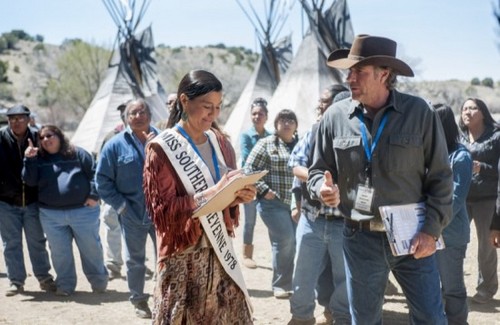 Longmire airs tonight on A&E with another episode of season 3. On tonight’s episode called “Miss Cheyenne,” Walt is asked to judge a pageant during an ongoing murder investigation. Meanwhile, Cady turns to an old friend for help.

On the last episode a murdered Russian adoptee lead Walt and the team to a shady underworld. Henry faced trouble in jail while Cady struggled to find him an adequate lawyer. Walt and Vic look like they were getting closer. Did you watch the last episode of Longmire?  If you missed it, we recapped it all here for you.

On tonight’s episode Walt Longmire juggles a murder investigation and his duties as a fill in judge for the Miss Cheyenne pageant. Meanwhile, Cady Longmire looks to an old friend for help with Henry Standing Bear’s case.

Walt splits his time working on a murder investigation and serving as a judge for a local pageant; Cady hopes an old friend can help with Henry’s case.

Tonight’s episode begins with Branch at the res clinic, where he is supposed to be investigating a patient who was screaming at a doctor, because the doctor later ended up murdered. Branch becomes more interested in working on his own investigation. He has a picture he shows the staff person and asks if he recognizes him. The man says that he does, but hasn’t seen him in a couple weeks. He called him David and shared that he comes in to donate blood. Branch takes off as soon as he gets the information he is looking for.

Henry is in court for a bail hearing. The judge makes it quite clear that the likelihood of Henry being let out on bail is slim to none but offers the weekend for Henry and his new lawyer to think about it before “wasting the court’s time,” as he puts it. Walt is in the courtroom as well and seems defeated after hearing the judge’s comments.

Walt is working the bar as Cady is drowning her sorrows after the bad news in court today. Walt reminds her that the judge allowed her and her client two days to figure something out. He takes off, but not before adding a picture of her as a young child on the “do not serve” wall. Cady gets a little laugh and Walt heads out.

Walt and Vic go visit the father of the young girl who was possibly molested. He asks Walt if he is going to be arrested for raising his voice to the doctor at the res clinic because he feels he did nothing wrong after the doctor abused his position and molested his daughter. Walt asks to speak with the girl because if she was molested, a report needs to be taken. The father refuses saying the daughter is at a friend’s house and the situation has been dealt with.

Vic and Branch talk about the girl’s case. Branch has a theory that the res clinic is a hook-up spot and that some women and men go there for a purpose. Vic doesn’t seem to believe him. Walt goes to speak with the father of Ben, the doctor who was murdered, to assure him that he will be investigating his death. The father is hesitant to help the police because this is the second son he has lost and the police didn’t even investigate the death of Andrew, his first son. Walt promises him things will be different this time.

Walt is judging a competition/pageant. One of the contestants is the girl who was supposedly molested by the doctor. When the main judge and guest judge, Walt, come to inspect her work as she skins an animal, Walt comments on her work with a knife. She seems to know what she is doing. She seems to get dizzy and looks down. Walt asks her if she is okay and she responds she is fine. Walt asks her what the doctor said about her illness as he knows she went to see him recently. She responds coldly, “he said it wasn’t contagious.” Walt tells the main judge and host of the pageant that he believes the girl is pregnant.

Later, as Walt walks to his car, he is confronted by the girl’s father who is furious because Walt got the girl kicked out of the pageant after making his suspicions about her being pregnant known to the pageant officials who demanded a pregnancy test. Upon confirming her pregnancy, she was kicked out. Walt hauls him off to jail because he aggressively attacked him but talks with him and gains more insight once the father has calmed down, now behind bars. He tells Walt that his daughter’s boyfriend is responsible for getting her pregnant.

When Walt asks him why he was screaming at the doctor, he shares that the doctor encouraged her to have an abortion. He then begins to share a lot of inside information about the res clinics and the doctors. He shares that every time a girl ends up pregnant, they tell her to have an abortion. When women go in for an appendectomy and would end up with a hysterectomy. He believes it is a plan to destroy their tribe’s legacy.

Walt is called over by Branch who shares that Andrew and Ben were both stabbed in the same location of the body. Branch has a theory. He believes the stepmother killed both sons so she would be the only heir to her husband’s money. Meanwhile, Henry is back in court with Cady feeling as little more prepared to fight for his bail after getting some help from a friend who has a little more experience in this area of the law.

Cady calls Ms. Stillwater to the stand to act as a character witness for Henry. She sings his praises and shows how grateful she is for how he has helped her daughter and family. She clarifies the Cheyenne definition of his name “Standing Bear” and confidently states she believes he would never run if he were allowed bail. Her statements seemed to truly impact the courtroom.

Walt meets with the father of the two men who were both stabbed. He cannot imagine why one person would murder both of his sons. Walt asks about his past as a doctor himself. Walt gets the doctor to admit what he had heard earlier. He was a doctor who was sterilizing women without their consent. The doctor shares that he did it out of necessity because of the poverty, drug, and alcohol use of many women. Walt tells him he needs to provide him with his patient records as he believes it was a patient that killed the doctor’s sons, but he believes it was HIS patient, not a patient of either son.

Back in the court room, the judge delivers a speech and shares that while he doesn’t usually make exceptions, he has decided to in this case. However, the bail is set at one million dollars! Cady calls Walt to let him know and shares her concern because of the amount of money they’ll need. He assures her she did a great job and tells her they will meet up later. Branch meets up with Cady at the bar and offers he the money needed to get Henry’s bail.

Meanwhile, Walt rushes to the pageant where the final judging is going on. He asks for the judges as he is on to something. He finds Dina, a member of the Cheyenne tribe. When Walt begins to ask her some questions, she easily lets everything out and confesses to murdering the doctors as revenge for what their father had done to her. He gave her a hysterectomy without her consent and she wanted to have children one day. He took that right away from her, and she wanted to take his sons away from him.

Meet you here next week for another recap of this exciting show!