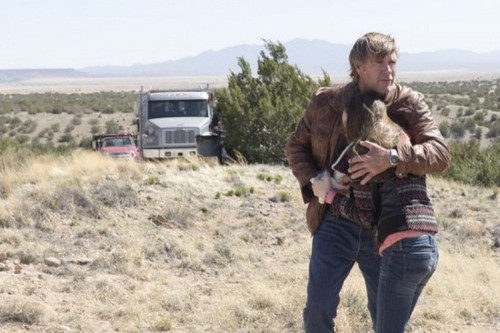 Longmire airs tonight on A&E with another episode of season 3. On tonight’s episode called “Of Children and Travelers,” Walt investigates the murder of a Russian adoptee. Meanwhile, Henry faces trouble in jail.

On the last episode in the season three premiere, Walt dealt with the aftermath of Henry’s arrest and Branch’s shooting. The search for the shooter however was complicated by Deputy Branch’s insistence that it was someone known to be dead.  Did you watch last week’s episode?  If you missed it we have a full and detailed recap, right here for you.

On tonight’s episode a murdered Russian adoptee leads Walt and the team to a shady underworld. Henry faces trouble in jail while Cady struggles to find him an adequate lawyer. Walt and Vic look like they are getting closer in the promo, will these two hook up like they did in the books? Either way, it is going to be interesting.

Tonight’s episode begins with a woman hitchhiking. When a man stops for her she takes a picture of his plates, then of him. When he asks why she tells him that, in case he kills her, they’ll know where to find him.

Shortly after, Vic calls Walt to the scene where she found a young girl murdered and dumped. Turns out she is a 17-year old Russian girl. Her cell phone is password protected so Vic couldn’t get in. Vic suspects maybe she was a trafficking victim who was trying to escape. Branch is back and says he wants to help and get back. When the two are alone, Branch thanks Walt. He says…for finding his hat. He doesn’t look so great as he sits at his desk.

Vic and Walt find the girl’s adoptive parents and they share the violent past of daughter Polina. They tell Walt and Vic about the turmoil they experienced with her, including death threats and violent outbursts. The share that they did not file a police report because they didn’t want her to come back after she ran away 11 months ago. Vic hands them the picture of Polina taken at the scene.

Henry is having a hard time in prison as he is not getting the public defender he is entitled to and has been on the receiving ends of violence. It begins to get even worse as inmates circle him as if they were sharks surrounding their bait. Molokai offers to help, but likely at a price. As he walks off, Henry stands and begins a fight.

Vic and Walt pay a visit to the home that Polina was staying at before she dies. They are told that she was constantly starting fights, was very aggressive, and that they became her guardians six weeks ago when her parents signed over their rights. They discover that the phone at the scene was that of the head of security for the home. Another girl from the facility sees Walt and tells him she thinks she knows who killed Polina. She has been the recipient of all the photos of the men who picked her up as she hitchhiked. The girl showed the pictures to Walt, and gets her out of the computer area just in time so that the girls can leave without getting in trouble.

Ferg was able to gain information from all the plates except the last one — the one they believe is the murderer. He shares this information with Branch, who is very distracted. Walt and Vic stay the night near Polina’s home to continue the investigation the next day. Shortly after they arrive, Vic knocks on Walt’s hotel room door to tell him they have to leave as they have a lead. Walt gains some information about Polina’s wild past from the head of security. When Walt pushes him to find out why his cell phone was at the scene, he explains that she stole his phone. He tells Walt he didn’t have anything to do with her murder and is a good guy. Walt asks him how exchanging sexual favors with underage girls makes him a good guy.

Walt, Branch, and Vic interview others who picked up Polina. They find out from one man that Polina said her father molested her. They went back to the family and question how she was placed in the home 6 weeks ago when they told him they haven’t seen her for 11 months. The parents fess up and say they “rehomed” her to a nice family who said they have raised many troubled Russian teens. Walt wants the information on the home where they left her.

Later, Walt meets with Molokai who attempts to threaten Walt as he knows he wants to protect Henry. Meanwhile, Ferg is working the bar when the suspected killer comes in. He hauls him in to the station and Walt questions him. He says that he recognizes the girl in the picture they showed him. He gave her a ride and took her to the trailer park she asked to go to. She got out but he didn’t wait for her. When Walt asks why not, he says he was scared because she looked like she planned to murder someone. Walt plots to find the “parents” by going into these chat rooms and acting as though they are parents looking to “rehome” their daughter.

They end up at the home of the Gunthers…the ones who took Polina in. They have her sister and the wife admits that her husband got upset after Polina left and came back to take Sophia, her younger sister and choked her to death. The husband pulls up and sees Walt there and takes off with Sophia. Walt has to do some heavy convincing to get Sophia to trust him, but she ends up walking away from her “father” and joining Walt as he gets her out of there so he can get her to safety.

Come back next week as we recap Walt’s adventures.