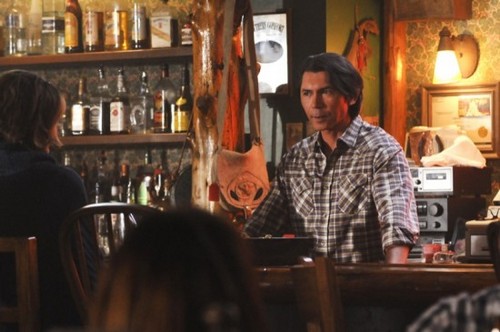 Longmire airs tonight on A&E with another episode of season 3. On tonight’s episode called “Wanted Man,” Walt attempts to narrow the field of suspects in his wife’s murder. Meanwhile, Branch’s behavior causes trouble.

On the last episode after a wilderness leadership trips took a dark turn, Walt Longmire and the team must track down a killer and missing teenaged campers. Branch continued his unsanctioned pursuit of his shooter. Did you watch the last episode? If you missed it we have a full and detailed recap, right here for you.

On tonight’s episode Walt teams up with Lucian Connally to narrow the field of suspects in his wife’s murder. The team tries to track down a witness who could help Henry’s case. Branch’s behaviour causes trouble.

Tonight’s episode begins with Walt appearing at Malachi’s parole hearing, preaching as to why he should not be released. Walt is working on his wife’s murder again and pulls three potential suspects off his picture wall and tells Vic he needs to get on finding out more about them. Walt tells Vic that she is in charge while he is gone, and she questions who she is in charge of since Walt gave Branch time off and Ferg is in training.

Branch is questioning a man he claims is the White Warrior. The man is blindfolded and toed to a chair. Branch starts going nuts when the guy does not give him the information he wants from him. Meanwhile, Henry gets very agitated upon finding out people are still donating money to help him. He yells that he never asked to be the recipient of charity. Walt tells him, he never expected him to be holding incriminating evidence but “here we are.”

That shuts Henry up. Walt shows Henry and Cady picture of the men he is going after for more information. He tells Cady that these are the men he most suspects in the death of her mother. She objects to him leaving to go alone, but that never stopped Walt from doing things the way he wants.

Branch tells his cohort that he didn’t have to come along once he tells Branch that he is acting crazy now that they are driving away from where Branch questioned his captive. They stop in a deserted area and take the man out of the trunk and leave him there. They take his blindfold off and watch him throw up and hallucinate because of the drugs Branch forced on him.

Walt shows up at a home to talk to a man who he apparently tried to put him away for murder after shooting his brother. The man is volatile and has a gun held in his hand pointed right at Walt. Walt remains calm and tells the man he just wants to talk. Meanwhile, Mathias comes to the station and tells Vic that he needs to report an incident that happened on the Res.

A man who was forced peyote said two “bleach boys” abducted him. He says that the guys has been missing work, so Vic thinks the man is using this as an excuse to give his boss. Mathias agrees but says he needs to report it in any case, so Vic gets the paperwork needed to go through the motions. Later one of the abductors is identified as Travis and Vic promises to take care of it.

Walt goes to see Lucian for help in an effort to narrow down the suspects in his wife’s murder. They hot up a house where women seem to be making cookies. They know something is off. When they show them a suspect picture they yell out that something is burning, but the men know it is a code used as a warning. They catch up with their man and after some questioning, Walt takes him in, telling him he did have a reason to go after his wife.

Vic goes to Travis’ home and is confronted by his overbearing mother who refuses to let her speak to her son. She comes through anyway and begins questioning Travis about the Cheyenne man who identified him. Travis denies everything at first, but after his mother breaks in with a video camera in an effort to protect her son, he agrees to go to the station to talk with Vic.

Stanley King is next on Walt’s list. As he takes off to leave, Branch sees Travis brought in by Vic. He asks what is going on and plays along that he cannot believe what Travis did, as if he was disappointed. Once he asks more questions, he assures Vic that it couldn’t possibly be Travis since the two of them were hanging out. Vic seems suspicious, but lets Travis go. Branch offers to let Mathias know about Travis’ alibi. Vic releases Travis.

Walt goes to question King. He talks about all of his regrets and time he has served to pay for his crimes. Walt keeps questioning and brings up Rebecca and his past of stalking and murder, leaving body parts throughout different towns. He goes nuts and has to be restrained, claiming that Walt is responsible for taking Rebecca from him. He says they would have been happy if it were not for Walt.

Vic comes back to see Travis. She is still suspicious over his alibi. She did some checking and found that he only had one drink, so their alibi of spending the night drinking was a bust. When Vic starts to handcuff Travis, he starts to spill the dirt on Branch. Not only does he tell Vic what happened, he shares that Branch is crazy and now he has a gun and badge.

Walt is back in the office and Vic is acting strange so Walt asks what is wrong. She starts asking question about rogue cops. He thinks she is talking about Gorsky, but she is trying to find out whether or not she should tell Walt about Branch.

Walt tells Vic about Cady and Henry’s meeting at Ms. Chapman’s house and share show she begged them not to go after Hector. He also thinks it is Hector who stole the chicken from a call they got in earlier. He marks the woman’s house on the reservation as she is someone they will be watching. At the bar, Malachi has been released and comes to cause trouble for Henry.

Walt finds Hector dying and he says David Ridges is the one who killed him. Walt asks why David would want to kill him and he says he does not know. Branch and Vic are there as well and take him out of the cave area he was found in, rest him on a rock, as he says this is between him and his ancestors now. He lays down ready to die.