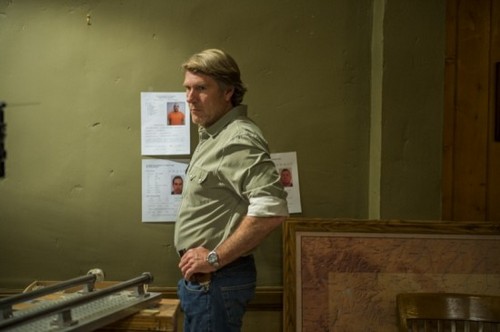 Longmire airs tonight on A&E with another episode of season 3. On tonight’s episode called “Reports of My Death,” a man who was missing for around 30 years shows up dead.

On the last episode Walt teamed up with Lucian Connally to narrow the field of suspects in his wife’s murder. The team tried to track down a witness who could help Henry’s case. Branch’s behaviour caused trouble. Did you watch the last episode? If you missed it we have a full and detailed recap, right here for you.

On tonight’s episode when a man missing for 30 years shows up dead, Walt must deal with media frenzy and determine if he really is the long-lost heir. Henry is tired of relying on others and makes a risky decision.

Tonight’s episode begins with Walt and Henry talking about Malachi and how he came to see Henry at the bar. It seems to have really done a number on Henry, who is not easily shaken. Walt leaves and finds what he thinks is a drunk man passed out on a park bench. Offering help, he soon realizes the man is dead. He rushes back to the station and yells for Ferg to come help. As a crowd gathers, Walt assures everyone the man is passed out. Ferg cannot understand why, but once they get him to the station, Walt explains that after checking his ID, he knows that while he may be homeless, he is also worth 100 million dollars as he is an heir to a fortune.

Walt and Vic go to see the man’s family. Wells’ family explains they have not seen him since he ran away. A sketch artist drew a picture of him 30 years earlier to show what he might look like today and the sketch seems to match the body they are shown. As Walt and Vic are learning more about the family, Wells’ brother is shocked to receive a call from the media asking about the death of his brother. Walt asks how they could have found out and a young teen lifts his head from his phone for just a moment to say that he tweeted the information .

Meanwhile, Henry is tired of living in fear of Malachi. Malachi and his men keep taking from Henry and making demands on him. Henry holds his leg in the freezer to be able to pop his ankle monitor off. He has a plan as he heads out without the chance of being detected. Camera in hand, he heads out. He is hiding behind bushes taking pictures. Shortly after, Cady comes looking for him as they have a meeting. She calls him after noticing he is not there and the doors are locked.

Walt walks in to a media frenzy, and then has to deal with Malachi who delivers a video camera he found and thinks Walt set up to spy. After he leaves, Walt screams for Ferg to get Branch on the phone as he knows who is behind the video cameras. Branch left shortly before with Vic after she expressed a strong desire to ride with him…likely to try to get to the bottom of some of the things she’s been hearing. Just as Ferg fumbles for his phone, Walt is interrupted by a man claiming to be Wells..he tells Walt stories of his death are greatly exaggerated. Walt sees the resemblance and is in shock.

Later, the man explains that he has been hiding for years and only planted his ID on the homeless man because they looked so much alike. He only came to Walt to tell him the truth so that Walt can contact the family of the dead man. Since Walt is skeptical, he asks him to go with him to the family’s house to prove he is the brother. He agrees but is smug when he gets there and won’t answer questions from the family that would help them discover whether or not he was legit. The family believes this is a hoax or attempt to get hands on their fortune. The teen is in the room and takes a selfie with Wells behind him. Wells says he has had enough and takes off as Walt seizes the phone and runs after Wells. Walt cannot arrest him and he takes off.

At the hospital, though Walt is told the homeless man died of a drug overdose, he doesn’t believe it. Walt goes to the homeless shelter where the man often stayed and talks with a friend of his. Walt finds out that Wells did not do drugs. He also learns that another man came around asking the man about Wells as well. Walt goes to see the private investigator who was at the homeless shelter. He gets a copy of the sketch he did years earlier and it is different than the one the family showed him. Walt cannot understand why he went to see the man at the homeless shelter two days earlier, but he explains that he just cannot give up on the case. Walt calls Ferg on his way back. After Ferg gets the update, he begins to become suspicious and comes up with a possible scenario that would mean there is foul play going on. Walt tells him he is on the right track, and that he is babysitting a murder suspect. As Farg gets off the phone, he sees the man claiming to be Wells is awake and likely heard everything Ferg said.

Henry goes to see Dina. She is happy to see him. He tells her that he was in jail and had a lot of time to think about what is important to him. He tells her he has a question for her and gets down on one knee as she waits in anticipation with a smile. He asks her…”Where the hell is my 40 thousand dollars?!” The two have a major blowout and she promises she did not have a choice in spending his money to protect him. Henry cannot believe she betrayed him again. He leaves her in tears.

Walt returns home and talks with the man claiming to be Wells. He is sticking to his story and talks about some memories and why he has been hiding. Walt asks if he knows the private investigator after he shows his card to Wells. Wells says he does and has an explanation for the large sum of money in his bank account. Wells paid him to stay away from him.

Vic tags along with Branch as he heads out to camp in the wilderness because she is so worried about his state of mind. They finally end up talking about what happened with Travis. Branch admits what he has done and Vic is surprised. She tells Branch that that is the reason she cannot leave him alone. He compares himself to Walt and Vic gets mad…Branch throws in a comment about Vic’s special relationship with Walt. He says he understands if she feels compelled to say something to him, but he needs to do this for himself.

Meanwhile, Walt heads back to the family’s house. Walt has asked the detective to meet him at the house and begins to question him and his desire for making some more money off of the family. The family did not even know that the PI found him years earlier and was paid off not to say anything. Walt moves on to Wells’ sister and questions why she identified a man to be her brother, who she knew was not. The PI finally confesses to what he knows. His sister involved him in a scheme to get Wells’ inheritance. She admits she felt slighted when Wells was said to get more money since, in her eyes, it was not fair.

Henry arrives at the bar as Cady is waiting for him. Before he can talk to her, he tells her that he needs to talk to her father and walks off with Walt. Cady comes in and Henry tells them about his ex-girlfriend feeding his money to Malachi’s men. He has pictures of Malachi and one of his employees who was blackmailing Dina. Cady seems to believe this is the man that had her mom killed. As she says so to Walt, he stares with no words.

Meet us here next week for another Longmire recap…Next week will be tense as Vic goes missing and seems to end up being tortured.