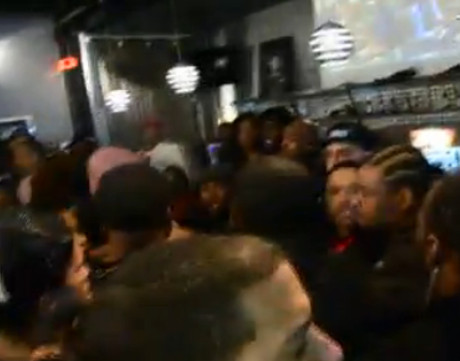 The cast of Love and Hip Hop Atlanta were involved in a crazy, brutal brawl this Wednesday during a filming session. For all the fans who enjoy watching their fave reality stars throwing punches, the entire thing was captured on a cell phone camera — all while the VH1 production team filmed the situation themselves. While it’s sad to say, the production team was probably squeeing with joy when the fight broke out, as on-camera tizzies (or slugfests) definitely bring in the television views. It’s a shame that people have to get hurt in the process. And there were definitely some injuries incurred.

The cast was filming at a restaurant opening when Joseline Hernandez walked in with a friend. The gates of Hell then opened. TMZ reports, “We’re told the friend instigated an argument … and pretty soon fists were flying. Karlie Redd was knocked out … several others suffered bloody cuts … and somebody threw a bottle at Momma Dee, hitting her in the face.”

Check out the video below, also courtesy of TMZ, and let us know what you think about the craziness that is Love and Hip Hop Atlanta. This fight actually seems like a bad one and it’s unfortunate that so many people had to get hurt in the process. It might be hard to take in the full brutality with this particular video, but we think you’ve get the gist of the drama.