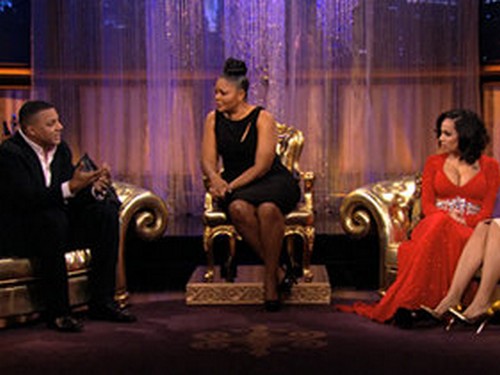 Tonight on VH1 LOVE & HIP HOP continues with a brand new episode called, “The Reunion (Part 1).”  On tonight’s show Part 1 of 2 Mo’Nique hosts a reunion featuring the regrouped cast discussing Season 4’s dramas.  Did you watch last week’s show?  We did and we recapped it here for you.

On last week’s episode worlds collided at Erica Mena’s performance as Rich revealed the final truth to Cyn.  Nick Cannon convinceed Peter to seal the deal while Yandy and Mendecees plot their future. Tahiry and Rashidah met for their final battle.

On tonight’s episode the cast of Love & Hip-Hop reunite and host Mo’Nique gets to the bottom of this season’s messy love triangles and relationships. Drama ensues with shocking reveals and explosive words, both on and off stage.

Tonight’s reunion is being hosted by the Oscar winning actress, Mo’Nique. She’s risen to much more exalted roles but is she still able to handle this kind of crowd? She just might. The first topic up for discussion happened to be Erica Mena and Rich. Erica came back on the scene this season with her new girlfriend, Cyn. Cyn had admitted she wasn’t thinking about getting involved with Erica in the beginning. She had actually turned her down at first but Erica kept pursuing her.

Cyn loves Erica and she thinks they could be happy if only Erica let go of Rich. She didn’t like their closeness and she felt Erica was putting up the proper boundaries with her ex. And Rich agrees with Cyn. He knows he was a jerk but Erica needs to take responsibility for what she’s done as well. She tells Rich to respect her relationship with Cyn and then she’s always on him the first chance they get. No wonder Rich thinks Cyn is nothing more than a prop there to make him jealous.

Even Mo’Nique could see what everyone else. She said these two people that were fighting in front of her must passionately love each other. She asked Rich if he loved Erica. Erica wanted to hear the answer more than Mo’Nique did. Cyn saw how much his answer meant to Erica and got mad. Rich did admit he loves his ex and later on backstage, Erica took it out her own frustration on everyone. She reduced Cyn to tears and was throwing things.

Erica came back out in a new outfit so she could meet Nya Lee face to face. The two women had run into problems this season when Nyla decided to basically insult everyone she met. She ran into problems with Rich then Tahiry. But she shouldn’t have gotten into such a blow out with Erica. The two women were friends before they got into a fight at the studio. Nyla thought she was better than Erica and Erica didn’t feel like she should pay any type of dues to a stripper.

However going over their fight doesn’t help anyone. Especially Mo’Nique seeing as she was sitting between them when they got into a fight. One of them had stepped on her shoes. She got back to hosting after Erica seat got rearranged. When both Erica and Nyla stopped yelling at each other, Mo’Nique pointed out that neither want to fight. They’re doing it now more out of habit than resentment.

The next people sitting on the couch are Tahiry and Joe. They were close to reconciling until an incident involving another woman in their bed came up. Joe has never confessed to cheating. He’s still sticking to his story that the girl was a friend which is probably why it leads to their break up. After all she has forgiven him for a lot before. This time though Joe tried to make it right by proposing. Sadly for him, he never counted on Tahiry turning him down.

Tahiry explained that she did love him but she couldn’t say yes. She needed him to understand that relationships need work and not a quick Band-Aid. Even if it was in the form of a ring. Joe hasn’t over getting turned down yet. He arrived to the show knowing they were going to talk about what he did to Tahiry and so he tried to change up the story. Joe claimed Tahiry never stuck by him through thick and thin. He was trying to lay blame and before he could truly rile up his ex; Mo’Nique intervened.

She had Tahiry tag her in. Mo’Nique wanted to know how Tahiry let him down and surprise he couldn’t really answer. In the end, Tahiry was the only other person beside his family he knew got him. And he knew he lost because he at fault.

Tara and Peter were no better. He had a good woman whom he loved but he couldn’t be loyal long enough to keep her. As for Tara, she knew after the fact that she took him from someone else and yet she claims she never saw Amina coming. Sure, he cheated on her in the past. In Tara’s mind that was separate to both Amina and all the times Peter came home late. Peter admitted to cheating on her longer than even she knew. He said she didn’t see it because she didn’t want to.

Although Peter said he only ever cared about two women – Amina and Tara. The hardest part was choosing between them. The show left Tara on the couch with Mo’Nique while Peter performed with Amina her latest single. The song is about how the two of them got together. Mo’Nique’s favorite line was “two wrongs just feel so right”. She asked Amen about it once she finished her set.

Amina says that’s how her marriage is. It’s that good for them. Mo’Nique wanted to know Tara’s opinion on the song too. Tara has always believe Amina was talented but she knows if a man were to sing her a love song like Amina just did then Peter would have a problem. And he wasn’t going to lie. Peter would have a problem with Tara essentially moving on. He wouldn’t anything about it but he wouldn’t like it.

Wait till you hear Amina’s reaction next week on part II of the reunion.