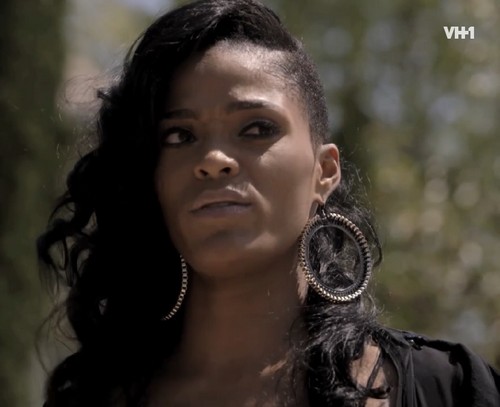 On last week’s episode Tammy and Waka reached a major milestone without the support of their family, while Joseline gave Stevie a new ultimatum. Scrappy’s attempt at a peace treaty with Erica Pinkett lead to an all-out war, and Benzino take his relationship with Althea to new heights. Did you watch the last episode? If you missed it we have a full and detailed recap, right here for you.

On tonight’s episode, Mimi’s sex tape finally releases; Kirk throws his apology party, but things don’t go to plan and the party end up being a disaster. In the meantime Karlie decides it’s time to face Althea.

Tonight’s episode of Love & Hip Hop Atlanta begins on the day that Mimi’s sex tape is scheduled to drop. She is taking her daughter to spend the weekend with Stevie J while she deals with the fallout. I think by now everyone but Mimi thinks that her boyfriend Nikko leaked the tape and made sure it handed in Vivid’s hands right? He was thrilled to cash in and Mimi has been mortified at the thought of it. She had to face the reality that the video was coming out anyway so either she could take control and negotiate or else she was going to be exploited for free. She decided to take the money and use it to build a better life for her kid but first comes the fallout.

Joseline is still ticked off at Stevie and goes shopping for a whole new wardrobe on his dime. She decides it’ll be used on a trip to visit K Michelle in NYC though. A phone call to K reveals that she still has Stevie sleeping in the basement of their mansion. After Kirk and Rasheeda reconciled her mom insisted that he throw her an I’m Sorry party. He rolls out a huge I’m Sorry banner and gets up in front of all of their friends and family to apologize. Kirk also explains in detail the cabin trip with Benzino and Bobby V. that got him in trouble in the first place. Karlie Redd is at the party and Althea decides that she should go and say something to her, to be nice. Or at least that’s what she’s claiming. In truth there is no love lost between these two and this will end badly no doubt with Zino busting up a fight.

Mama Dukes is working overtime to make Scrappy understand that he has to fix things with Erica P. She’s upset that he went off on the girl and hurt her in all the ways that he swore he wouldn’t. Eventually he agrees to apologize and Mama Dukes calls to invite Erica right over. Finally we jump back to the party and as Althea walks up to Karlie and Erica.  Karlie decides to apologize for their last fight. The apology doesn’t last long though and it’s actually funny to watch Ho-thea as they call her, completely pop off like a little hood rat. It’s pretty sad when Karlie is classier than her!

Mama Dukes gets Erica and Scrappy to sit down and it turns into a lovefest. I’m not sure why these two aren’t together for real. Scrappy seems better off with Erica then any of the other chicks he has dated. Back at Stevie’s house he catches Joseline creeping out the door and tries to stop her from fleeing to NYC. It’s a failed effort and Joseline reminds him that she knows he was banging Ho-thea awhile back before leaving town. Joesline meets up with K Michelle in NYC and they watch Mimi’s tape together and die laughing at how skanky she is.

Back in Atlanta Ariane and Erica watch Mimi’s tape together and they get furious because clearly this tape was a production. It wasn’t a homemade tape it was professionally done and intended to sell. While her friends are mortified, Mimi and Nikko are doing press for it. She claims to be hiding from the attention and she is still pretending to be horrified but she has to go through with it. She is totally annihilated by the press questions and it’s clear that she and Nikko didn’t expect people to realize that they were trying to scam everyone. Tune in next week for more of the sex tape fallout on Love & Hip Hop Atlanta.