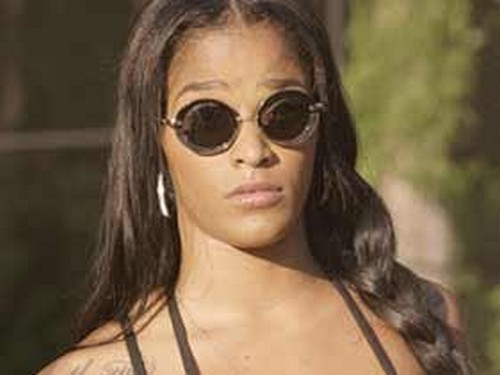 Tonight on VH1 LOVE & HIP HOP ATLANTA airs with a brand new episode called, “Round and Round We Go.” On tonight’s show Tammy and Waka reach a major milestone without the support of their family, while Joseline gives Stevie a new ultimatum.

On last week’s episode Joseline made a discovery about Stevie’s past. Meanwhile, Tammy and Waka coped with a death; Mimi got a peek at her sex-tape trailer; and Benzino dealt with a vicious attack. Did you watch the last episode? If you missed it we have a full and detailed recap, right here for you.

On tonight’s episode, Tammy and Waka reach a major milestone without the support of their family, while Joseline gives Stevie a new ultimatum. Scrappy’s attempt at a peace treaty with Erica Pinkett leads to an all out war, and Benzino take his relationship with Althea to new heights.

Have you guys been tuning into Love & Hip Hop Atlanta? If so then you already know that Ashley has breezed into town and she certainly is messing with Kalenna and Tony’s marriage. She has decided that she wants Kalenna all to herself and that’s causing some real problems. Kalenna has talked about hooking up with ashley in the past and has admitted to getting busy on this visit too but it’s still not enough for Ashley. Meanwhile Tammy finally launches her fashion line and her showing seems to be pretty well received.  She thanks fiance Wacka Flacka and they have a moment together after the show. She decides to marry him without needing the big fluffy wedding.

Scrappy decides to meet up with Erica Pinkett and tries to play the friend card. She proves that he has sent her booty call texts but he minimizes the whole thing and sticks her in the friend zone. Things turn ugly fast and the camera goes black as Erica puts her hands on him. Security guards end up splitting the two up as Scrappy leaves the restaurant.

Stevie- or Stebbie as Joseline calls him, has been in the doghouse for days because she is pretty positive that he hooked up with Benzino’s new chick Althea. Not too hard to believe considering Stevie’s body count. He’ll take down just about any chick on the side so and since Mimi claims she saw him with Thea then it probably did happen, right?

Benzino claims to be a changed man since being shot while in the funeral procession for his mother. He still has bullet fragments in his arm and in this episode he’s discussing his healing progress with his doctor. Zino got luck because the bullet was an inch from his spine. Zino later has a conversation with Thea and she wants Stevie to admit that they hooked up years ago. She feels like the elephant in the room will make it harder to be friends.

Tammy and Wacka  did actually get married. They walked iAt least until they tell both of their mothers. Neither one is happy with them deciding not to have a real wedding.  Unfortunately Kalenna and Tony aren’t so happy. He is watching Ashley mess up their marriage and calls her on it. Kalenna agrees that Ashley has to go home so that they can finish their album and get their family back on track.

Mama Dukes decides to pay Erica Pinkett a visit to apologize for her sons’ behavior. She is crushed that Scrappy was texting her that he’s in love with her and then getting violent when they came face to face. Mama D reassures Erica that it’ll never happen again. Erica has a history of violent relationships and it’s pretty obvious that this thing with Scrappy has really messed her up even more.

Joseline meets up with Karlie and tells her that Stevie still keeps lying and that she needs to see other people. She’s about to take a trip to see other men and women. She also claims to be this close to moving out.  Speaking of splits, Kalenna breaks it to Ashley that she needs o go home because she needs to focus all of her attention back onto her marriage. Ashley is crushed and starts to cry.

Benzino decides that he can’t risk not having Althea by his side and so he takes her for a ferris wheel ride and proposes. Of course she says yes and boy will that make waves! Tune in next week for more Love & Hip Hop Atlanta.