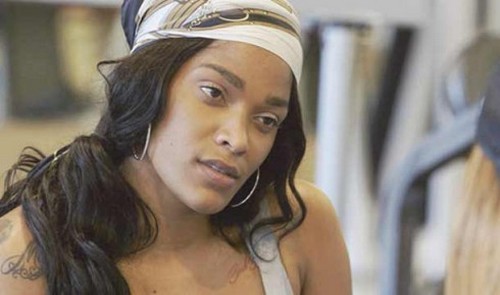 Tonight on VH1 LOVE & HIP HOP ATLANTA airs with a brand new episode called, “A Bullet in the Arm.” On tonight’s show Joseline learns about Stevie’s past; Tammy and Waka try to move forward; Mimi has a preview.

On last week’s episode Joseline’s suspicions over Stevie’s fidelity reached a fever pitch. Kirk and Rasheeda took the next step in their relationship, while Kalenna’s house guest caused a shakeup in her marriage. Mimi and Ariane feuded over Nikko. Althea shared a dirty little secret, and Benzino was faced with a family tragedy. Did you watch the last episode? If you missed it we have a full and detailed recap, right here for you enjoyment.

On tonight’s episode, Joseline makes a discovery about Stevie’s past. Meanwhile, Tammy and Waka cope with a death; Mimi gets a peek at her sex-tape trailer; and Benzino deals with a vicious attack.

RECAP: On tonight’s episode of Love and Hip Hop Atlanta, Erica finally got around to telling Karlie Redd about Althea’s relationship with Stevie J. All they know is that the two did at one point hook up but no one knows if they’ve stopped since Benzino entered the picture. So when Karlie later heard from Joseline that both Althea and Stevie went with Benzino to his mother’s funeral – Karlie just had to ask who exactly did Althea leave with.

Then when Joseline wanted to know why that was so important – she was told about what Mimi claimed to have seen in person. A naked Althea at Stevie’s house. Joseline doesn’t trust Althea (she probably never did) and yet she doesn’t quite trust any story that originated from Mimi’s mouth either. She knows how much Mimi likes to drive a wedge between her and Stevie.

Joseline swears she’s going to confront Stevie the moment he comes back in order to get the truth, but something stopped her from tearing into her husband. Really, what happened to Benzino has everybody shocked into silence because how could anyone foresee Benzino getting shot at his mother’s wake.

Benzino was injured although nothing serious enough to warrant spending too long at the hospital. However Benzino seemed to have reevaluated his life while he was laid up. After the shooting, Benzino decided to move past what happened between Althea and Stevie. He loves the both of them and merely wants to move on.

Back in Atlanta, tensions reach a whole new level between Kurt and his mother-in-law. Recently he and Rasheeda have been trying to find their way back to each other and before they can move forwards she asked him to reconcile with her mother. Her mother while stubborn does want Rasheeda’s marriage to work out. But all Kurt is concerned about is the fact that no one made an apology to him about him bike. His mother-in-law had run over it when she found out he cheated on her daughter. And that seems to be the one thing Kurt wants to talk about.

He doesn’t understand that he did something that pushed the older woman over the edge nor is willing to listen to her suggestion that maybe he should throw an apology party as a way to make recompense towards Rasheeda. He didn’t like that and so he broke his mother-in-law’s glasses so that she could see that personal items do have value.

Rasheeda was just telling her friends about all of this when they learned about Benzino. And suddenly her problems didn’t look so bad.

Sometimes it takes a shakeup like that to get people to see their life differently. With what happened to Benzino – Kirk is choosing to go ahead with the party. He acknowledges now that he needs to show both Rasheeda and her mother that he will do just about anything to get his family back. His friends made fun of him when they heard his plans but for once Kirk isn’t trying to impress “his boys” with his actions.

He also even handed out some sage advice to Scrappy. He told him that if he wanted Bambi back then he had to get rid of the other Erica. Scrappy has to make a choice between both women on who he really wanted in his life instead of stringing them both along like he’s been doing.

And Scrappy ignored the advice and tried to get Bambi back by using a small dog as present. She liked the dog though she still wasn’t sure about Scrappy. Bambi won’t take Scrappy back until she hears he dropped the other Erica.

Benzino is out of the hospital and one of the first people to come see him was Stevie. Stevie stopped by because he said he wanted to clear the air. Stevie is claiming he never slept with Althea and there isn’t a person on this earth that actually believes him. Benzino doesn’t buying it seeing as he knows darn well that Stevie wouldn’t want his wife to found out.

Plus Joseline wasn’t sitting around the house twiddling her thumbs when her husband was away. She went out and investigated the Stevie and Althea rumor. And by time he returned, she told him that she didn’t want to stay married to a cheater.

As for other self-reflecting, Tammy might be getting married sooner than she thought. The marriage plans was put on the backburner since their family’s tragedy. And then that changed when her fiancé Waka told her he simply wants to get married. No one wants the big wedding anymore so he told that they should just go down to the court house. All he wants is to be a real family.