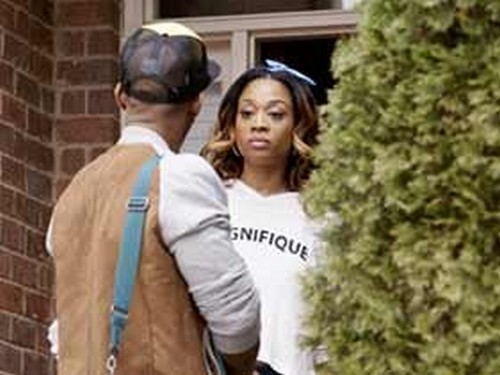 Tonight on VH1 LOVE & HIP HOP ATLANTA airs with a brand new episode called, “Change of Course.” On tonight’s show Stevie sets out to apologize to Joseline. Elsewhere, Erica’s romance goes from sizzle to fizzle; Mimi and Nikko clash over his past; and an exposed secret impacts Kirk’s marriage.

On last week’s episode Stevie J and Benzino took on their newest venture, but when Karlie and Althea had a run in at their grand opening, it all went down in flames. Waka and his family dealt with a tragic loss. Secrets were revealed during Mimi and Nikko’s Anniversary Party, and a conversation with Karlie lead Joseline to a scandalous discovery that leaves her marriage on the brink. Did you watch last week’s episode?  If you missed it we have a full and detailed recap, right here for you.

On tonight’s episode, Stevie tries to apologize to Joseline. Erica’s hot and steamy romance with O’Shea starts to fizzle. Mimi and Nikko butt heads over his past with Althea. Rasheeda, Karlie and Kalenna take a “girls trip” to New Orleans. And the accidental reveal of a secret jeopardizes Kirk’s marriage.

How do the ladies get over their man troubles? They turn to their friends for support. Rasheeda and Karlie both needed a break from Kirk and his mess so they, along with their friend Kalenna, planned a girls’ trip to New Orleans.

Karlie recently ran into some complications with Benzino and his new girlfriend Althea. The couple was falsely under the impression that Karlie wanted to get back together with Benzino (thanks to Kirk) when the truth is she’s quite happy in her relationship with Joc. So Joc told her how she could get Benzino back for the party incident as well as all the things he’s been telling people ever since.

Joc let Karlie take a dick pic of him. That way she could put it alongside a picture of Benzino’s to show how much she’s upgraded. Her friends were in stitches over it while Benzino is incredible upset. He doesn’t want people to think his penis is actually that small and so he’s covering ground with his boy, Stevie J. Benzino used him to spread the story that his genitals was photo-shopped to look smaller.

Though Benzino has more pressing concerns than Karlie. It seems what happened at his club opening made him second guess his girlfriend. He’s not sure he wants to propose to the same girl that caused a scene at was supposed to be his big night. It was kind of a hood-rat move.

And he isn’t the only one that needed answers about Althea. Everyone knows she has a past and Mimi wants to know if what Althea and Nikko, her Nikko, is firmly in the past. Mimi is having some trust issues with Nikko and the way he tells her things isn’t helping. Because Nikko likes to filter out the truth in drip by drip. After Mimi kept on asking, he told her that Althea has still been reaching out to him and that they’ve kept in contact.

Well, she wanted to know why. He confessed he thinks Althea was still interested in him and then that guess somehow turned into a confirmation she’s been after him. Whether that’s the truth we’ll never know, but there is someone else out there, besides Mimi, that’s interested in Nikko and that trick left her lipstick stains all over his collar. Mimi found out about it when she was doing the laundry. So she promptly threw Nikko out.

Obviously, Nikko had his readymade excuses yet Mimi wasn’t interested in them. The trust was gone and she felt like Nikko used her. And their sex tape was also too convenient for Mimi’s liking.

Elsewhere, Erica has her own relationship issues. Her boyfriend O’Shea was using her to cover his bills and that was never clearer than when he left her place in a temper only to later call her because he ran out of gas. He wanted her to come down and literally bail him out. And it was his expectation that she would just pay for him once again that ended the relationship. Erica told him to fend for himself for a change. She was tired of taking care of him and O’Shea didn’t look like he ever planning on getting back on his feet.
Their relationship is over!

Though, with any luck, the same won’t be said about the many marriages on the line. Joseline went back to Stevie J. with conditions. As long as helps her make her music then they can get over his man whore ways. But Rasheeda might have hit her breaking point.

Kirk, in a fit of temper, accidentally told his mother-in-law about the DNA test on the baby. And the mother told her daughter. So Rasheeda knows how much Kirk doesn’t trust her and it doesn’t matter that he’s full of apologies now. The fact that he did the test to begin with means he questioned her fidelity.

Where can they go from here?