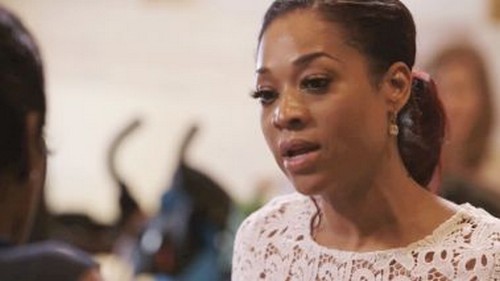 Tonight on VH1 LOVE & HIP HOP ATLANTA airs with a brand new episode called, “Blast from the Past.” On tonight’s show Karlie and Joc’s relationship reaches a breaking point.

On last week’s episode Fallout from Mimi’s magazine cover impacted Stevie. Meanwhile, Mimi went into an emotional tailspin upon receiving news; Kalenna and Tony worried about their baby’s health; and Joc was caught in a compromising situation. Did you watch the last episode? If you missed it we have a full and detailed recap, right here for you.

On tonight’s episode, Karlie and Joc hit a point in their relationship that could end it all, Benzino takes his future seriously as he plans to try and secure it.

Tonight’s episode begins where we left off last week, with Mimi and Nikko having a serious talk. A few months back MTO claimed that Nikko was still married and Mimi just caught wind and confronted him. Nikko admitted that he is indeed still married and that he never brought it up because Mimi never asked. Now that she asked he is telling the truth. Oh and this idiot has no idea when and if he’ll be getting divorced. Needless to say, Mimi storms out.

Zino set his wedding date to Althea- or Ho-thea as they like to call her- and he has a blow out bachelor party that looks pretty PG rated. Stevie is actually Benzino’s best man which gets complicated since Stevie smashed Ho-thea. Joseline is still flipping out over that little situation. Stevie breaks the news that he is going to LA to work with Snoop Dogg and of course Joseline makes a million threats because she is uninvited.

Stevie is worn down and decides to take Joseline along with him to LA. The two of them end up in the studio with Snoop who flatters the Puerto Rican princess. Benzino is supposed to join Stevie in LA and is uninvited on the trip. Zino and Althea talk and she clues him in to the fact that Joseline has been bullying her on Instagram. Zino looks like a man with a plan.

Karlie Redd had supposedly been doing a duet with Joc and after their super messy split all bets are off. She calls Rasheeda and Kaleena to the studio and tells them that she bought the track off the producer and is kicking Joc off of it. The ladies try to talk her out of it because it’s a clear spite move and the music scene is all about having positive relationships. Karlie doesn’t seem to care much though.

[8:59:35 PM] Cate Meighan: Mimi meets with Erica and Ariane to basically come clean about all things Nikko related. They already know that he has played and used Mimi but she finally admits that the sex tape wasn’t exactly homemade because they needed more footage to sell it. Uh-huh it was made in studio, professionally as everyone suspected. The ladies call Mimi out as a liar and she storms out- something she;s getting good at doing.

Meanwhile Tammy is determined to have a baby with Wacka and decides to go for fertility testing to make sure everything is ok. She checks out, now she has to get her new husband in the door for testing.  Stevie comes clean with Snoop and tells him that he did indeed smash Ho-thea and now before he can be Zino’s best man he needs to come clean. Telling Joseline is going to be the problem and Stevie is trying to figure out the best way to do it.

Meanwhile Karlie is already filming her music video and she has invited Joc to the studio so that she can tell him that she has replaced him. She talks trash to him while Joc wishes her well and insists he’ll get paid. Mimi is also taking care of her issues with Nikko by going to his former best friend Johnny. He tells her that Nikko and his wife are still together and tight. Nikko and his wife work together and have a deep connection. Johnny tells her that Nikko is very calculating and that the sex tape was not leaked but a set up. Johnny admits that Nikko told him he wanted to get her on camera. Mimi claims she is sick to learn that she may have been secretly taped. She declares Nikko her new enemy.

Stevie decides to tell Joseline the truth, until he sees her. Then he decides to do it tomorrow. Tune in next week for more Love & Hip Hop Atlanta!