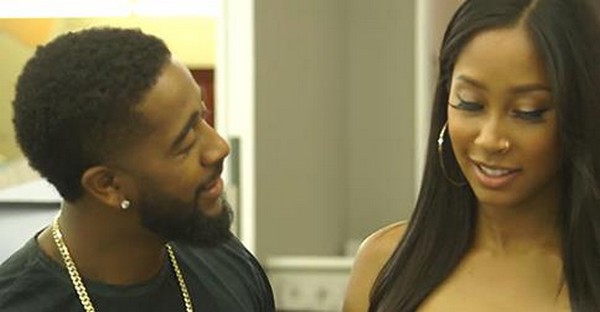 Tonight on VH1 their new series Love & Hip Hollywood airs with an all new Monday September 22, season 1 episode 2 called “Ex’d Out.” On tonight’s episode, confronted by his girl, Nia, Soulja Boy comes clean and reveals his past misgivings.

For those of you unfamiliar with the show, in this new series Love & Hip Hop heads to tinsel town with a new group of R&B and hip hop hopefuls have their eyes on the prize and are ready to deliver the shock, drama and scandal as only the #1 social show of the summer can do. With the music industry constantly evolving, these artists’ unwavering ambition keeps them hustling to stay at the top and willing to lay it all on the line.

On the last episode, Teairra Mari tried to hold on to her love for Ray J, and Soulja Boy and Nia set out to build a future together. Fizz and ex girlfriend Moniece continued to have communication issues in regards to their son and Omarion and Apryl prepared for the arrival of their first child in the series premiere of this reality show charting the lives of hip-hop denizens in Hollywood. Did you watch the last episode? We recapped it all right here for you.

On tonight’s episode Nikki makes a discovery about her boyfriend. Meanwhile, a compromising picture tests Nia and Soulja Boy’s relationship, and Teairra Mari makes plans to separate herself from Ray J for good.

After Ray J’s ex and his latest started to get into it – Ray decided to kick Teairra out of the party. He felt she was being ungrateful (after all she was late addition to the party) and her refusal to calm down only made her look like a liability. The party was actually a work event and he can’t exactly network or have anyone take him seriously while a catfight is going on in the background. So Teairra found herself kicked out and now she’s angrier than ever!

Ray J’s girlfriend had crossed the line. There is no doubt about that. The other girl might have thrown away all of Teairra’s things that was at Ray J’s house but to then carry around pictures of someone’s sensitive creams means this girl was always going to after Teairra. And luckily Morgan was able to see that Teairra was influenced at the party – she just got it wrong thinking it was purely the alcohol consumption.

Morgan thinks Teairra becomes a different person when she drink so she tried to reach out to Teairra. Though the two of them soon started to argue about what really caused the fight. Morgan doesn’t like violence and Teairra can sometimes view violence as a default setting. Hence the two of them could never agree on whose to blame or what has to change.

The only person Teairra was willing to apologize to was Hazel-E. Hazel has had her own issues with guys so she’s been supportive towards Teairra. She and Yung Berg have been together for a while, but he doesn’t like the idea of exclusivity. So Hazel was prepared to accept that (it’s not like she could fight it without losing him in the process).

Yet when Teairra heard about what Berg was doing to her friend – she got instantly judgmental. She told Hazel to leave him even though she’s the one that still has Ray J’s name tattooed.

Meanwhile Fizz is moving on from his past relationship with Moniece and is developing a serious relationship with a new woman named Amanda. However once Moniece found out about this Amanda – she swore she had to make a few things clear with the other woman. Moniece says she just wants to clarify that only she could be her son’s mother yet she never seems to spend that much time with her son. And even her sounding board, Apryl, recognized her motives weren’t all that clear.

When Moniece did met Amanda, the first thing that came out of her mouth was a threat. Because, apparently, Moniece wants to know each and every time Amanda is with her son. Sort of like tracking their movements. And so Amanda in return was offended.

It’s not like she came from out of nowhere. As matter of fact, she and Fizz had been together for two years. And the little boy in question has accepted Amanda into his life without any problems cropping up. So if Moniece was that concerned – she would have kept more in touch with the son she claims to live for. Spying on someone – especially so late in the game – seems kind of crazy. Like the crazy Fizz accuses her of being.

Then there’s Nikki. She’s well connected in the music industry because of her family’s empire that includes multiple strip clubs and currently she’s been on again/off again dating producer Mally Mall. Right now they are on a break and during this particularly break Mall has been dating notorious video vixen Masika.

Masika alleges that she’s been with Mally Mall for the past couple of months (essentially a lot longer than when his break up with Nikki started) and lately she’s been posting nonstop photos of the two of them together and then rubbing it in Nikki’s face in it.

So these two are about to have it out one way or another! Unfortunately, though, Morgan once again finds herself caught in the middle! She knows both women and the ladies are bound to use her in their fight.

As for Souja Boy, he might have gotten caught cheating on his girlfriend. But for now he denies anything happened with this other woman and so it’s up to Nia whether or not she can believe him. Then trust him.

Then in the final moments of the show, we got to see Teairra about to enter into yet another fight. She’s basically a cliffhanger’s dream. And she was fighting with her friend Hazel when Ray J walked in on her tattoo removal party and dump all of her stuff on the floor. So tension was already high when Ray started something he might not be able to finish!