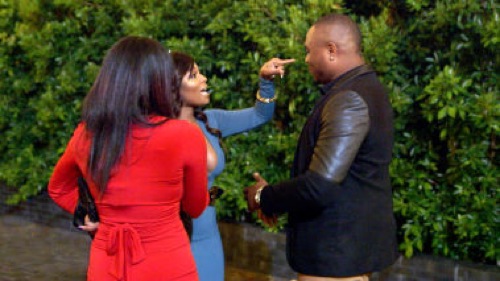 Tonight on VH1 their new series Love & Hip Hollywood continues with an all new Monday October 20, season 1 episode 6. On tonight’s episode, after her disappointing performance at her comeback gig, Teairra Mari gets an earful from promoter Sincere, which causes her to lose her control.

On the last episode, still fuming for the drink-throwing party with Masika at Morgan’s lunch, Nikki had caught wind that the girl she thought was her friend had been gossiping about her with Mally Mal’s new mistress. Did you watch the last episode? If you missed it, we have a full and detailed recap right here for you.

On tonight’s episode, It’s been a long time since Teairra Mari has performed live on stage and she’ll finally get her big break to launch her music career again when Sincere invites her to perform at his club.

Teairra Mari decides to hold a showcase in order to prove that she’s serious about getting back to work and tell people she’s coming back. Sincere tells Teairra that people aren’t going to want to see her because she hasn’t had a hit in a while and they can Google anything she’s done before. He says what she needs to do is a small, intimate show where she can really showcase her singing. This offends Teairra, but at the same time she knows how fickle audiences are and that she hasn’t had a hit in a while. He says he’ll be the first to let her know if she’s no longer got “it.”

Yesi asks Morgan to hang out, hoping to lift her spirits. She tells Morgan to step out on her own without Ray J, inviting her to do some red carpet interviews with her. She says Morgan needs to take the risk to go out on her own. She says she needs to ask Ray because she’s going to be there working for him. “You’re working for yourself,” Yesi says. “I’d be crazy to turn this down,” Morgan ends up deciding.

Fizz drags Omarion out of the house to commiserate about the women in their lives. Fizz tells him Monice has issues with another woman being around her son, but she needs to step up. And how is girlfriend Amanda is ambivalent about their future and moving in. He’s uncomfortable with her lack of commitment at this stage in the relationship. Omarion wonders if he’s looking for a “main chick” or a mother for his son, and if Fizz could really trust Amanda making this step with him. Fizz mentions her infidelity. She even had a separate apartment where she would meet her paramour. Omarion is shocked that he then took her back. Fizz tells him that he wants to make this step with Amanda because of the time they’ve spent together. He decides he’s either going to make this work or just walk away.

Now that she’s done with Mally, Masika is pursuing a new business opportunity. Someone she used to work with is opening a new high end strip club in Las Vegas, which will have A-list clientele. He says he couldn’t think of a prettier face to be the face of his new venture. She will be featured on ads and billboards. Masika says while she has never been and wouldn’t become a stripper, she’ll model for a strip club “as long as it’s classy.” Then, the man drops the bomb that Nikki’s family owns the property this club is on. She tells him about the issues between them, but he says he doesn’t care about their personal problems and wants her to be the face of his club. “I cannot wait. I’m very excited,” Masika says.

Fizz takes Amanda out to dinner to talk, and Monice repeatedly texts him saying she wants her son. Fizz says he’s not taking his kid to random places to meet her. He and Amanda fight again about his lack of commitment. He says in the relationship, some things are non-negotiable. He says she doesn’t have much to do in the day and there’s no reason she can’t help with his son, and every time she’s M.I.A. he is reminded of her past infidelities. “My son is invested in this relationship with you,” he says. He says what she did in the past can’t be forgotten. Amanda says she knows what she did but she doesn’t want to live in that mistake forever. He asks her why she can’t work on gaining his trust back. She says she’s willing to make it work.

At the Power House event, Ray J is pissed because Morgan has told him she doesn’t want to work passing out his merchandise. Instead, she wants to be a celebrity correspondent. He says he’s thirsty, but he can’t get water because his hired assistant isn’t there with bottled water. He confronts Nesi, and she says it was her idea and he should blame her, not Morgan. Ray J still blames Morgan because she has been acting up in various ways lately and this is her job.

Ray J complains to Yesi about all of the work she should have been doing at the event. Morgan is surprised he isn’t at least happy for him, and he says it’s because he isn’t happy. Morgan says she thought he cared about her as more than an assistant. Ray J thinks she’s taking advantage of the fact that she’s now considered family. “Since you want to spread your wings, spread your wings,” he says. “Fly.” Morgan says she just wanted to do something for herself for once, but Ray J says this is about being professional. Yesi decides to walk out so they can resolve this in privacy. Ray J basically fires Morgan on the spot, and then walks out.

Masika is on the set of a photo shoot for the strip club. She is nude in a tub full of diamonds. She says the best part of the day is getting to mess with Nikki, whom she invited to talk to her at the shoot. “I have no idea why the hell Masika’s naked ass is in a bathtub full of rhinestones,” Nikki says of walking it. She wants to talk to Masika to clarify some things about Mally. She asks about Mally’s claim he only flew to see her or vice versa twice. Masika says she couldn’t even count the number of times they met up. She says she didn’t love him, but she thought he was someone he could love. When Nikki brings up the fact that they said “I love you” to each other, Masika says she only said it because she was getting her hair pulled. This sets Nikki off because it’s proof that they really did sleep together, that being something he likes to do. Masika shows lengthy text messages between the two of them. Nikki is still doubtful, but Masika says she is done with this completely and never wants to talk about Mally again. Masika is extremely amused Nikki didn’t even connect the photo shoot to her family’s club.

Teairra is excited to perform in LA for the first time in six years. Sincere hopes Teairra sounds better than she looks, saying she looks like she’s put on a few pounds and the cat ears she’s wearing for the performance are stupid. Teairra goes out and performs a song called “Touch Me,” and is having problems hitting some notes. Some people in the audience laugh and shake their heads at her, and Sincere feels this whole performance thing may have been a mistake. Teairra knows the performance wasn’t perfect, but she needs to put herself out there to get back in the groove. Teairra goes up to Sincere and Miss Diddy, who were just talking about how bad she was. Sincere tells Teairra she needs to get into the gym so she looks like she’s going to perform when she gets on the stage. Teairra is not about to be talked to that way, and tells him he doesn’t need to think his advice is the Holy Grail, because it’s not. He asks her if he wants her to lie to her about how good she was, but Teairra says he should not be talking to her that way. He keeps talking crap to her and she tries to hit him. He mocks her for being “too slow” because she’s overweight. As he walks off, she screams at him about his hairline.

Fizz feels that some of the stuff he’s told Amanda is finally working on her. They go shoe shopping together. He shows him the kind of shoes his son likes, saying that’s going to be her job. She says she’s been trying, but Fizz says she’s been doing it, not just trying. She has to decide to do this or not to do it, saying she makes him feel like she’s going to leave tomorrow when she says she’s just practicing at this whole thing. However, Amanda coming to his son’s game, which he views as a big step. The only thing is that now Fizz has to figure out how to keep her and Moniece apart. In the car, Amanda sees a text message on Amanda’s phone from a guy in a Miami area code about a dinner reservation. He tries to grab the phone to look, but she won’t let him see. She is sick of being questioned by him just because of her past mistakes, and she won’t have this conversation again, so he either needs to get over it or they need to be done. He says he’ll drop her off as clearly she has somewhere to go given she’s got dinner reservations.

Nikki plans to surprise confront Mally at dinner tonight about the inconsistencies in his story about Masika. Nikki still wants to give him the benefit of the doubt, so she wants to restrain her mother until he at least eats his meal. However, as soon as he sits down her mother asks him if he loves her daughter. He says he loves her 100%. Nikki’s mom brings up the humiliation her daughter felt at the hands of him, what with the Instagram posts and text messages. Nikki says that if he wants to defend himself by saying they were on a break for a couple days he can do that, but he still lied to her face and that’s the real issue. Her mom gets down to the truth by asking Mally if Masika stayed the night with him in his bed, at which point he hesitates, telling Nikki all she needs to know. She tells him she’s done and has washed her hands of this relationship. Leaving, he calls her the lowest thing he’s ever met in his life and tells her never to speak to him again before speeding off. Nikki throws the flowers he had given her out the door.