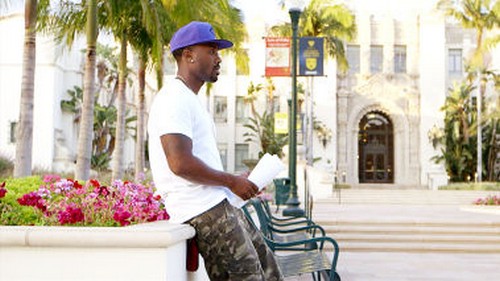 Tonight on VH1 their new series Love & Hip Hollywood continues with an all new Monday October 27, season 1 episode 7 called. On tonight’s episode, a musical marriage is cemented between Teairra and Berg.

On the last episode, it had been a long time since Teairra Mari had performed live on stage and she finally got her big break to launch her music career again when Sincere invited her to perform at his club. Did you watch the last episode? If you missed it, we have a full and detailed recap right here for you.

Apryl is becoming more and more nervous as the date of the home birth approaches. She asks Omarion if he wants their son to be circumcised, and he says yes. Apryl says if their son is going to be circumcised, Omarion should be circumcised too. She says he needs to get it together because his penis is too big and it hurts. ‘Listen, if my son is man enough to get his, I am too,’ he says. ‘Just maybe not now.’

Apryl is still wary about Omarion’s mother being at the birth because of her previous comments about Apryl not being in the right mindset for motherhood. She says she wants an apology from her, and Omarion says he will have his mom call her.

Teairra is ready to put work in on both her voice and her body after her disappointing performance and Sincere’s comments. She is working on a new track by Berg, which she loves, and wants to focus on that and not any drama with Hazel or anyone else. Berg is impressed with her work, and thinks he could take her to the top of the charts if she keeps singing in the studio as well as she has been.

Berg thinks their chemistry is so good they may hook up, but Teairra is not having it and already thinks he needs to calm down after he starts putting his hands on her thighs and being flirty. “Strictly business, honey,” she says in the confessional. “Keep it cute.”

Ray comes to confront Yesi about how she gave Morgan a job. “You got my assistant fired,” he says. She says she’s trying to help Morgan get on her own two feet. Ray J says she should help him with his new track. She says if she listens to his song and it sucks, she isn’t going to play it no matter what. When he starts getting in her face, she calls security. They have to hold him back and remove him from the premises as he thrashes around, screaming.

Hazel tells Masika that she’s creating a song about Berg, which Masika thinks is stupid because it’s not as if Berg is going to hear the song and wife her.
Masika tells Hazel about her modeling job and how Nikki’s family owns the strip club she is modeling for. Nikki came into a shoot asking him questions about what happened between her and Mally. Nikki didn’t even know that Masika was there shooting for a business owned by her own family.

NIa asks her sisters about her relationship with Soulja Boy, whom they haven’t met even though they’ve been seeing eachother for over eight years. She says she didn’t want to bring him around her family when he wouldn’t even be sticking around, but now she thinks it’s more serious.

Ray J is charged after allegedly grabbing a woman’s butt. When someone threatens to make a citizen’s arrest, he flips out and the cops are called. Then, he kicked the window out of the cop car. “Yeah, I was a little turnt, but only because I got mad,” Ray J says, adding that he has never been in jail before and does not intend to go now.

His father, after picking him up from jail, says he should confront his drinking. Ray J protests, saying he likes to party and drink but is not an alcoholic. His father brings up the numerous instances in the past where he has acted similarly. ‘I don’t have a drinking problem,’ Ray replies, ‘I have problems with people when I’m drinking.’
“We have a problem,” his father says.

It has occurred to Soulja Boy that he still doesn’t know what Teddy Riley’s opinion is on his relationship with Nia. He asks her why this is, and she says it’s because they’ve been on and off for eight years and he had cheated on her in the past. He asks what she thinks Teddy will think of him, but she says he has also cheated in the past while on tour. Total, Teddy has 10 kids.

Teairra reaches out to Ray J’s manager after the arrest because she still cares about him and he hasn’t been acting like himself lately. His manager says she should reach out to him and that he thinks she still wants to be with him. He says because they never had closure in their relationship, that door remains open between them.

After Omarion’s mother calls her, Apryl begrudgingly agrees to let her come over to discuss the issues between them. Immediately, she says she doesn’t know what she’s apologizing for.  “I have yet to see you make any type of sacrifices,” she says. “When Omarion travels, you travel with him.”
“That is a sacrifice,” Apryl says. “Sacrifice is staying at home,” Omarion’s mom replies.

She explains that she doesn’t have personal problems with Apryl but takes this very seriously because Apryl is Omarion’s first child’s mother, and her comments were a way to try to offer help. She apologizes for the offensive way her comments came off. Apryl says she wants to move past this and have her son’s grandmother at the birth.

Soulja Boy is incredibly enthusiastic about the fact that Teddy Riley is a serial cheater who has had ten children with various women. He and Nia meet up with him.
“Today is just the evaluation day,” Teddy says, mentioning that he didn’t even know they had been seeing each other.

He asks why they kept breaking up, and she admits he has cheated. Teddy says he doesn’t want to see this being an on-off situation, and Soulja Boy reassures him that he is serious about this relationship. Teddy Riley has Nia leave, and he asks how they met and if they hooked up on the first date. “I want to say no,” he answers.

Teddy says he has lived the touring life and been through everything he has been through and is concerned about things he’s seen online.
Soulja Boy says he has changed and his focus is the record and coming back to his family.

“My concern is, ‘is she safe with you?’ You got a lot of proving to do,” Teddy says.

Teairra finally accepts that she is not fully over Ray J and will always care about him because of everything they’ve been through together.

She meets him in the studio and asks him what has been going on. When she brings up the fight at the tattoo party, the last time they saw eachother, he says he hopes she’s happy about how she acted at the tattoo party. She says she hopes he is happy too and she thinks she is also owed an apology, which Ray J says she isn’t going to get one.

She brings up how he had cheated on her, and he says he never did because they were “never together like that.”
“Have a good life,” she says before storming off.

Hazel meets up with Berg to show him she’s serious about the music. She plays the music she’s been working on and Berg and he thinks her lyrics are wack and he’s tired of her ‘pushing up on me like a Muppet in heat.’

“I think you’re delusional,” he tells her, saying he has never been his girl.  She thinks he’s two-faced and is mad he’s crapping on a record she put her heart into.

Berg says she won’t be using any of his material, and she flips out on him screaming. Berg laughs in her face and has her pulled out of the car. He throws all of her stuff from her bag out into the street.