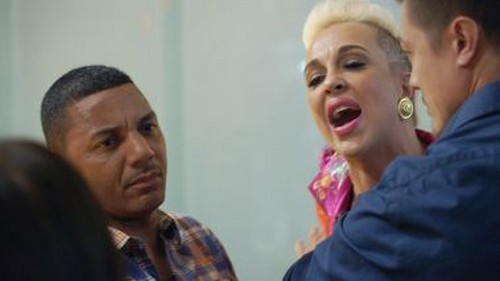 Tonight on VH1 their new series Love & Hip Hollywood continues with an all new Monday December 15, season 5 episode 1 premiere called “Bride and Prejudice” and we have your weekly recap below. On tonight’s episode, Season 5 opens with Mendeecees Harris and Yandy Smith contemplating the next steps in their lives.

This season “Love & Hip-Hop” is taking another bite out of the Big Apple and is back for season 5.  Equipped with their core cast, as well as some new faces, “Love & Hip-Hop” follows the stories of the heartache, successes and failures of the lives of NYC’s Hip-Hop scene.

On tonight’s episode as per the VH1 synopsis, “season 5 opens with Mendeecees and Yandy contemplating the next steps in their lives. Also: Peter can’t stop focusing on Tara; and Chrissy faces her enemy.”

Love is in the air but knowing this group of people – these happy happy go-go lucky feelings hardly have a chance of lasting. Erica Mena is back this season and she seems like she’s ready to commit to her girlfriend Cyn. However Cyn doesn’t feel comfortable about possibly moving in with Erica and that’s all because of a certain kiss her longtime girlfriend shared (on air by the way) with Bow Wow.

Erica said the kiss hadn’t meant anything. Though with some prior knowledge (namely Erica’s recent engagement to Bow Wow) it looks like Cyn is unfortunately in for a world of hurt!

And speaking about deluded dreams, Amina and Peter are back together, but she says this time Peter is going to be different. He’s promised to be a changed man and with a baby on the way – Amina really didn’t have a choice about forgiving him for his past indiscretions. So the two of them are busy working on building their family and yet there’s a couple of pieces missing in this particular puzzle. Like Peter’s two sons by Tara.

Tara has been very firm about not allowing Amina to be around her sons even though Amina is their stepmother and she’s about to have their little sister. So Amina has been pushing Peter to get Tara to change her mind and he’s been telling her to be patient. He knows how upset Tara was by their pregnancy news and so he doesn’t want to push her. But she kind of needs to be pushed. At least on certain matters!

Tara says she’s done with Peter but she hasn’t told her kids he’s no longer living with them nor has she mentioned that daddy has a new wife. So that’s why she claims to be hesitant on allowing them to meet Amina. Though, even if Amina and Peter divorced tomorrow, her daughter will still have to be part of Tara’s sons’ lives.

Meaning, Tara will never get rid of Amina and by now she should probably accept the inevitable!

Yandy Smith thankfully had a reason to keep holding on and waiting for Mendeecees finally ended up paying off. After hearings and what felt like a thousand legal loopholes working against them, Mendeecees is out on bail. And Yandy couldn’t be happier.

Since he’s been in, she’s been raising their boys by herself. And truthfully she needed his help with their oldest boy. It’s been hard on her going it alone.

And maybe that’s why a lot of women try to make their relationships work. Even if there is some road blocks laid out ahead. New girl Diamond Strawberry is packing up her life and moving to New York to be with her boyfriend of two years. Yet said boyfriend Cisco isn’t exactly happy about the move. It seems he likes their relationship just as it is – long distance.

That way Cisco can do whatever he likes in New York all the while his girlfriend in LA remains ignorant. But she doesn’t want their relationship to stay on the back burner. So Diamond is coming out to New York, against his advice, to pursue things. And her boyfriend is doing his best to binge on strippers as he waits for her.

Then there’s another new face we got to meet this season. Chrissy Monroe runs a talent agency called Le Jeu Entertainment although rumor has it she used be a high priced Madam. And Chrissy sort of confirmed these rumors when she began to talk to Rich about Erica Mena.

Erica apparently was an escort back in the day and Chrissy is claiming the other woman used to work for her. But then they had a falling out. Because once Erica’s career started to take off – she tried to distance herself from Chrissy and to do so she basically threw Chrissy under the bus at any opportunity. Anyways, that was Chrissy version of events. Erica on the other hand says she and Chrissy used to run with the same friends.

So Rich being Rich, he had both women come to the same building in spite of knowing about their feud. He was supposed to working with Chrissy in finding talent for his upcoming promotional for his new liquor but he also planned on meeting Erica real quick for a meeting downstairs.  And, well, Chrissy couldn’t resist. Hence she came downstairs and honed in on Erica.

Chrissy wanted to teach Erica a lesson and luckily security stopped anything from happening.

And as for Yandy, she and Mendeecees finally took that trip they’ve been playing on and because its so rare – let’s all hope her relationship gets to work out!