Why Did L’Wren Scott Hang Herself – Did Relationship Break Up and Trouble Play In Suicide Death? 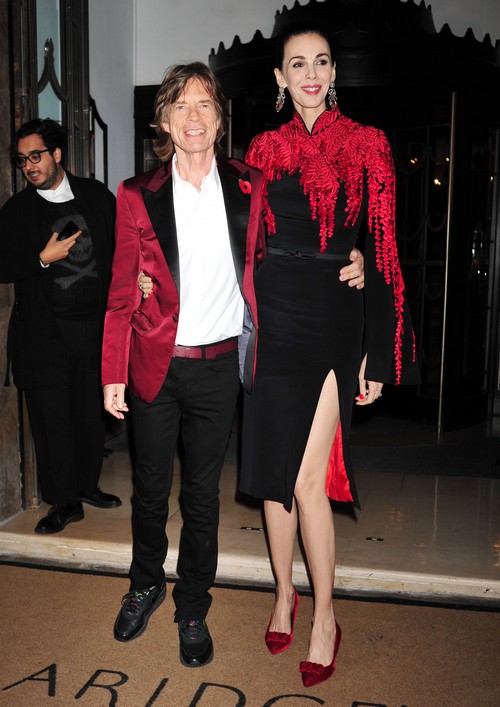 L’Wren Scott’s boyfriend of 12 years, notorious Lothario Mick Jagger was on a world tour at the time of her death. He was allegedly farther away from girlfriend L’Wren Scott emotionally, however, than he was in actual distance we are learning. While a spokesperson for Mick claims they were still together at the time of her suicide, other reports claim that they had split with Mick “having dumped L’wren.“

The leggy 6’3 model and designer, 49, began hinting at marriage toward the end of her life. Only last year, The Sun had reported that L’Wren had begun bringing up the subject of marriage to the legendary rocker, but it seems her requests fell on deaf ears. Perhaps L’Wren, knowing Jagger would soon begin a world tour, wanted a more official commitment from him before he left with The Rolling Stones for a lengthy tour that would take them all over the world.

Jagger notoriously cheated on his former wives and girlfriends, and has reportedly bedded over 4,000 women including Mackenzie Phillips (at only 18), Angelina Jolie, Janice Dickenson, and Carla Bruni to name a very small few. In fact, shortly after Jerry Hall gave birth to their child Gabriel, she learned he impregnated another woman. That was when she ended their longtime union. So, it is safe to say that L’Wren had reason to be concerned that he’d have temptation while away, especially considering how women throw themselves at him.

Adding more salt to L’Wren’s wounds, Page Six reported in 2010 that author Zoe Heller wrote in The New York Times Style T magazine on December 3 that Jagger described his relationship with L’Wren as “kind of dating,” adding, “I don’t really subscribe to a completely normal view of what relationships should be.” He went on with a real stinger, “To be honest, I don’t really think much of marriage. I’m not saying it’s not a wonderful thing and people shouldn’t do it, but it’s not for me. And not for quite a few other people too, it would appear. I just think it’s perhaps not quite what it’s cracked up to be. I know it’s an elaborate fantasy.”

And in an eerie blind post on March 14, 2014, just three days before her death, many speculate that the post from crazydaysandnights was written about L’Wren and Mick. The post reads:

She is not dead, or at least don’t think she is dead. I think people would say something if she died although she has disappeared from the face of the earth and no one is saying much of anything right now. She is a C list celebrity but is A list in her own little corner of the celebrity world. Her boyfriend is a permanent A lister and has been cheating on her almost everyday for the past month which also adds fuel to the fire. They used to be inseparable. Now they are not only separated but he is having his way with groupies and celebrities and other people taller than him. There are reports she had a breakdown because he was cheating on her. She canceled a hug event she was working on and has retreated into a hospital to get help although some people say she is hiding out at her home with medical professionals. You would think people would be talking by now but just the whispers getting louder. I think when her boyfriend gets back home the whispering will be much louder.

Suicide.org reports that “over 90 percent of people who die by suicide have a mental illness at the time of their death. And the most common mental illness is depression.“ Given those statistics and the anxiety and hurt she was experiencing in her personal life, she may have decided to tragically give up. While many in her circle report there were no signs of trouble, she did cancel her London fashion show in February for “production delays,” but now some are considering she had other reasons. Previously she had ranked in The Hollywood Reporters’ 25 Most Powerful Stylists from 2011 to 2013, but was not on the list this year. L’Wren was experiencing significant financial trouble (her company’s debts are reported as being as high as 3 million by Mail Online), anxiety and fear over Jagger being on tour, and was hurt that her requests for a more official commitment from Jagger were declined.

A law enforcement source described Scott as Jagger’s “former” girlfriend — and she told a longtime friend from her native Utah last week that the legendary Stones frontman had dumped her.

Another source close to the designer said she planned on apartment hunting when Jagger returned from his tour.

Jagger’s rep insisted that the Hall of Fame rocker and Scott — who began dating in 2001 — were “absolutely” still a couple when she died.

“A split between Mick Jagger and L’Wren Scott is 100 percent untrue,” a spokesman said.

“There is absolutely no basis in fact to this story. It is a horrible and inaccurate piece of gossip during this very tragic time for Mick.”

Several close friends, including actress Ellen Barkin, went to Scott’s apartment after learning of her death and spent time there with her body, a pal said.

“They’ve known that something was going on, and it’s been going on for at least a week,” the friend said, adding that Scott had been acting strangely and ducking phone calls.

A designer and friend to many, she is being mourned all over the world. RIP L’Wren.

We will continue to provide updates to you as they are available.