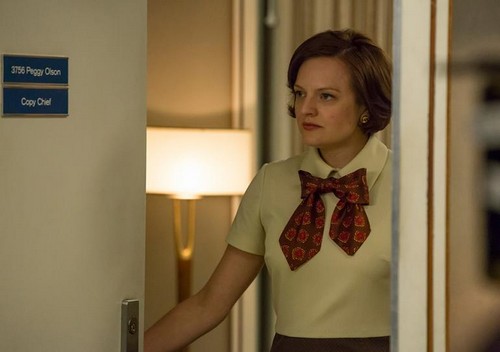 Tonight on Mad Men it’s an all new episode called, “A Day’s Work,” where Peggy receives a bouquet of flowers at the office. Pete navigates the politics of new business. Joan is put in an impossibly awkward situation.

On last week’s episode Don made a new friend, and Joan met a client for drinks. Elsewhere, Peggy heard some impressive new work and Roger experienced a strange phone call from his daughter who wanted to meet with him.  Did you watch last week’s episode?  If you missed it we have a full and detailed recap, right here for you.

On tonight’s episode Peggy receives a bouquet of flowers from someone anonymous at the office. Pete explores the politics of new business and Joan is going to be put into an uncomfortable situation.

We will be blogging Mad Men Season 7 Episode 2 at 10PM EST . . . so make sure to come back to this spot and watch the show with us. Make sure to refresh often so you get the most current info! While you wait for the episode you can catch a sneak peek of tonight’s episode BELOW!

RECAP: Don wakes up, alone, and realizes it is already past lunch. He opens up a box of Ritz crackers, watches TV and watches a huge cockroach walk across the floor. Don gets dressed, then someone arrives at the door – it is Dawn. She advises him that she sent his wife a valentine bouquet. She also gives him news about what is going on at the office. Don offers her money, she refuses, she just wants to answer his phone and keep him up to date. In the end, Dawn takes the money for cab fair home.

Meanwhile, Sally is in a dorm with her girlfriends who plan to go shopping at Grenich Village when they skip out at a funeral they have to go to.

Pete arrives in his apartment with his girlfriend, she wants to make out but he wants to work on Chevy. Pete Changes his mind and starts getting it on with her.

The net day, Peggy is in the elevator and tells Michael he did good work on a recent campaign. Stan is there too and through their conversation he figures out that Peggy has no plans for Valentines Day. Peggy arrives at the office and finds a huge bouquet of roses, she at first thinks it is a joke from Stan, but he denies it. Shirley walks into Peggy’s office, she doesn’t know who sent them either. Peggy figures out that Ted sent the flowers, she calls him and speaks to Moira, she leaves a message that says “she relayed his message to the client, there is nothing he can do, they don’t want to hear any more pitches, the business is gone”.

Roger arrives at the office.

Sally is in a train with her girlfriends, she all of sudden notices that she left her purse at a coffee shop where they went. Sally gets off the train.

Dawn and Shirley exchange good mornings, Shirley tells her that the flowers were hers and Peggy thought otherwise and took them. Dawn says it is an honest mistake, Shirley says who the hell would want to send her flowers. Dawn advises Shirley to let it go, it’s not worth the trouble now if she tells Peggy the truth.

Don meets a Dave from another firm to talk – he tells Don that the rumours are that he was thrown out of the company.

Sally arrives at SC&P, she sees Lou and asks him who he is. He tells her his name, when she asks where her dad is, he says that he is not there. Sally then asks for Joan and heads to her office only to find it closed. Sally then heads out of the office.

Don and Dave are still having a bite when Jim walks up, but Dave basically tells him to go because he is interested in hiring Don and doesn’t want Jim to scoop him up.

Peggy walks out of her office and gives the flowers to Shirley, she tells her that it smells like an Italian funeral in her office.

Pete & Ted are in on a teleconference with the SC&P partners; the meeting is quickly adjourned when they lose contact with Pete & Ted.

Don arrives home, Sally is there – he tells her that he was at the office. Sally is confused, she tells Don that her roommates mother died and they let them go to the funeral, but she lost her purse. Don offers to drive her, she tells him that he really doesn’t have to.

Lou calls Joan to his office, he calls Dawn in as well. Lou tells them that he does not want Dawn cleaning up Don’s messes; he wants her moved to another department, he wants his own girl. Dawn tells him off, she skipped her lunch because she was buying his wife perfume, had she not, she would have been there when Sally arrived.

Roger calls Pete, tells him they will keep the business but they want to pass it through Detroit, so Bob will be involved. Pete starts to vent, Roger hangs up on him. Pete goes in to see Ted and tells him they should open their own agency because everyone ignores them.

Dawn is at her desk, she barely gets a moment to pack up her things when another girl arrives to take her spot.

Don is in the car with Sally, he starts interrogating her about her whereabouts and she tells him she doesn’t have to tell him anything; just like him. Sally tells him that it was very difficult to go to his apartment because she could have bumped into that woman. Sally then tells him to stop talking.

Bertram goes to see Joan and requests that he move Dawn again, he doesn’t like to have a person of color so visible at the front of the office.

Pete goes to see his girlfriend, Bonnie, he talks to her about meeting up for a rendez-vous; he wants to now, but she tells him she will after she sees the people she is expecting to view the house. The doorbell rings, she tells him to put the sign back that he removed for the open house.

Don is at a restaurant with Sally, she doesn’t want anything, he eats alone. Don tries to make idle chit chat, but it doesn’t work. Don tells her that the reason he is not working is because he told the wrong things to the wrong people at the wrong time; they were things about himself. Sally asks what he is going to do, he says he doesn’t know, it really is up to his work. Sally wants to know why he doesn’t stay with Meghan if he he is not working, he says he would if she were there. Sally asks why he doesn’t tell Meghan that he doesn’t want to go to California.

Sally calls her roommate, tells her that she is with her dad. She gets back to the table, Don ordered her a meal. Don tells her that he doesn’t like her going to funerals. Sally admits it was horrible. The waitress brings the bill, Don tells Sally that he is going to the car and when she is done, she should follow him outside.

Roger sees Joan with flowers in a box, wonders where she is going and she says she is going to her new office, Jim suggested it. Dawn is also moving, she goes into Joan’s old office.

Roger and Jim are in the elevator, Jim tells him that he would hate to see him as an adversary.

Don and Sally are back in the car, he pulls up to her school. Don offers to go in with her, but she assures him that he will be fine with the note he gave her. Sally tells Don she loves him, then goes.

We can see that today’s episode of Mad Men that  poor communication and misunderstanding can lead to lots of problems!