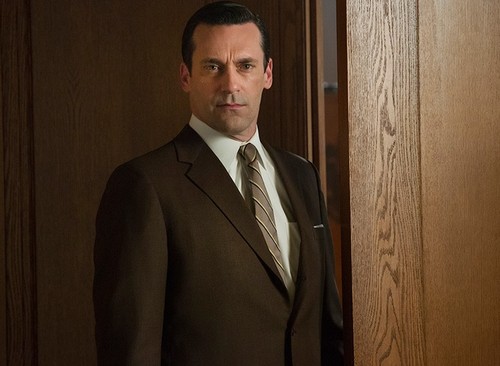 Tonight on Mad Men it’s an all-new episode called, “The Runaway,” on tonight’s episode Don gets a visitor from his past; Stan embarrasses a superior; Peggy helps Ginsberg with a problem; Harry discovers a new ally at the agency.

On last week’s episode Sterling Cooper along with the Partners got ready for a guest, Don ended up calling an old friend and Roger stepped up and dealt with the problems at home; Pete found out Peggy’s full potential.  Did you watch last week’s episode?  If you missed it we have a full nad detailed recap, right here for you.

On tonight’s episode a man from Don’s past reappears visiting him, Stan slips up and makes an embarrassment of himself to a superior of his; Ginsberg ends up having a problem and Peggy offers to help her out and Harry discovers that there is a new ally at the agency.

We will be blogging Mad Men Season 7 Episode 5 at 10PM EST . . . so make sure to come back to this spot and watch the show with us. Make sure to refresh often so you get the most current info! While you wait for the episode you can catch a sneak peek of tonight’s episode BELOW!

Tonight’s episode of Mad Men begins with Don and Peggy in the elevator, Peggy reveals to Don that Lou is happy to have her on the Handy Wrap team. She attempts to discreetly remind him that he is just a part of the team, not leading the team.

Don heads in to his office and receives a collect phone call from Stephanie, who is standing in a phone booth and very pregnant. She breaks the news to Don that she is expecting and is “running out of bread.” Stephanie reveals that she is seven months pregnant, Don gives her his wife Megan’s address in California and tells her to go stay with his wife.

Megan receives a phone call from Don, he informs her that he is coming out tonight. He also tells her that Anna Draper’s niece Stephanie is going to stop by and she is very pregnant and needs help.

Stan finds a cartoon comic strip that Lou created called “Scout’s Honor,” on the Xerox machine. Shirley flips out on him and his co-workers when she finds them making fun of the comic and informs them they “weren’t supposed to see it.” Stan shows the comic strip to Don, and Don could care less-he wants Stan to get to work.

Betty is preparing dinner for her neighbors, and Henry encourages her to let the housekeeper take care of it. Betty is nervous, she wants the neighbors to start thinking they are “regular neighbors.”

Stephanie arrives at Megan’s house and introduces herself. Megan reveals she has been “staying at a flop in the park,” but she is headed to Oakland-she has some friends there. Megan gets ready to make her some dinner and tells her to make herself at home.

It’s time for the Handy Wrap meeting, and moments before Lou catches Stan in the bathroom making fun of Scout’s Honor. Lou flips out during the meeting and proclaims his comic strip is better than the ones in the paper and he has a dream just like Bob Dillon. He informs the team that he wants finished pitches and no one is leaving until they are done. Don tells his secretary to book him a later flight to California.

Betty and Henry are having a tough time proving they are just “normal neighbors,” when Henry begins expressing his political views.

Don tries to talk to Lou and get out of work early but Lou informs him he will be “tucking him in” tonight. Don calls Megan and informs her that he won’t be flying out until the next morning. Stephanie gets out of the bath and sits down with Megan, she confesses to her that her baby-daddy is in jail and will get out next month. Megan says Don would disapprove and Stephanie informs her she knows “all of Don’s secrets.” Megan writes her a check for $1,000 and tries to send her on her way. As Stephanie is preparing to get dressed so she can leave, she informs Megan that “nothing ever happened,” between her and Don. Megan laughs it off and says she knows, but she doesn’t seem convinced.

Later that night Betty and Henry get into a screaming match over his opinions on the war. Henry is furious that she brought up his position on the war in front of the neighbors and tells her next time to “leave the thinking up to him.”

Lou stops by Don’s office and tells him that he has changed him mind and Don can turn his work in on Monday.

Don arrives at Megan’s house and Megan reveals that Stephanie left. Megan says that she gave her $1,000 and she left. Don’s not happy, and Megan lies and says she tried to get her to stay. She heads out to dinner with her friend Amy, and leaves Don home alone.

Betty is furious when Sally’s nose is broken because her and her friends were “sword fighting with gold clubs.” Betty already has an appointment scheduled with a plastic surgeon to get it fixed.

Michael arrives at Peggy’s doorstep, he rushes over form the office on a Saturday because he caught Lou and Cutler having a secret meeting, he blames the computer. He says the “machine makes people do unnatural things” and he is convinced that it has “turned Leo and Cutler into homos.” He has to work at Peggy’s apartment instead of the office, he doesn’t want to be around the computer.

Don joins Amy and Megan at a party with other actors. Don stands on the sidelines uninterested while Amy flirts with him and Megan mingles and dances with another man very seductively. Don becomes clearly uncomfortable.

Bobby sneaks in to Sally’s room in the middle of the night and reveals he is scared that Betty and Henry are getting a divorce, he says he “has a stomach ache all the time.” He wants to run away with her.

Peggy wakes up and finds Michael staring at her. He says the computer is getting to him, he caught himself getting excited over Stan’s shoulders the other day. He says it is the computer’s fault. Then he jumps on top of her and kisses her and tells her that they “have to reproduce.” She kicks him out of her apartment and tell shim he needs to get help because he “isn’t right in the head.”

Don runs into Harry at Megan’s acting class party, they head to a quiet bar and drink together. Harry tells Don that he feels like he “has to look out for him and make sure he is still important.” He doesn’t think that the agency should get rid of Don, he thinks they should move him to LA. Cutler and Lou are pursuing Commander Cigarettes, and if they land the client, “Don will have to go.” Don thanks him for the inside information.

Don returns home and Megan and Amy are waiting for him, the party has died down and all of their guests have left. He heads to bed and Amy follows him and says she is “supposed to tuck him in.” Megan follows her in and they sit on the bed with him and Megan says she “doesn’t want him to be in a bad mood.” Megan tries to get Don to kiss Amy, after some persuasion he does. Then, Megan and Amy kiss each other and proceed to seduce Don.

The next morning Don wakes up in bed with Megan and Amy, he heads to the kitchen to make coffee and Megan follows him. While she is kissing him good morning the phone rings, it’s Stephanie. She says she is back in Oakland, and she couldn’t stay because she promised Anna she wouldn’t interfere with his life. Don tells her he is worried about her and to call him when the baby comes. After the phone call Don reveals to Megan that he has to go back to NY, Harry told him some things and he has to deal with them. He promises her he will come back next weekend.

Henry arrives home after taking Sally to the doctor, he announces that she didn’t need surgery. Henry tells Betty to come into the other room with him because he doesn’t want to “sit in the kitchen with her like the help.” Betty flips out on him and tells him that she is tired of being treated like she is stupid and being told “how to think.”

Michael marches into Peggy’s office and tells her that he is all better and he has true feelings for her. He gives her a gift box, and she opens it and finds his nipple inside. He cut it off himself, and says it is the “valve” he uses to control the computer’s currents in his body. Peggy sneaks out of her office and makes a phone call, EMT’s arrive at the office and carry Michael out strapped down to a stretcher. Peggy cries and stares at the computer in the other room.

Don marches into Lou and Cutler’s meeting with Commander Cigarettes. He knows they have bad blood between them but he reveals he is willing to leave the agency if they sign with Lou and Cutler. He also explains to them why he wrote the letter and sweet talks them. Afterwards Cutler proclaims he “is incredible.”