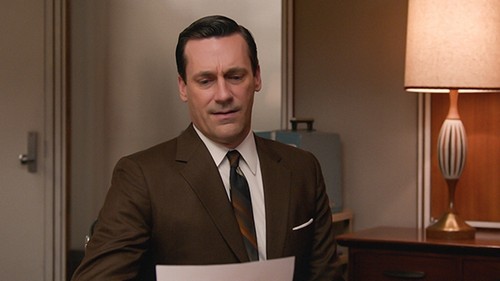 Tonight on Mad Men it’s an all-new episode called, “The Strategy,” on tonight’s episode Peggy does research for a pitch; Pete is invited to join an exclusive club; Joan seeks time spent with a friend.

On last week’s episode a man from Don’s past reappeared visiting him, Stan slipped up and made an embarrassment of himself to a superior of his; Ginsberg ended up having a problem and Peggy offered to help her out and Harry discovered that there was a new ally at the agency.  Did you watch last week’s episode?  If you missed it we have a full and detailed recap, right here for you.

On tonight’s episode Peggy wants to do more work and decides to do research for a pitch, Pete is given the opportunity to join an exclusive club due to getting an invitation and Joan wants to find some time to spend with a friend of hers.

We will be blogging Mad Men Season 7 Episode 6 at 10PM EST . . . so make sure to come back to this spot and watch the show with us. Make sure to refresh often so you get the most current info! While you wait for the episode you can catch a sneak peek of tonight’s episode BELOW!

Tonight’s episode of Mad Men kicks off with Peggy at Burger Chef, she is currently leading a team that is creating an ad campaign for the fast food restaurant, and she is paying customers $10 to complete a survey regarding why they eat at Burger Chef.

Meanwhile Pete is on his way back to New York, and has brought his blond girlfriend Bonnie along with him. They slip into the bathroom for some Mile High Club time. They arrive at the office and Pete and Bonnie stop by Don’s room. Pete informs Don he wants him at the Burger Chef meeting. Peggy pitches her Burger Chef campaign and Don supports her, she gives him props for his help.

Roger is in the steam room and his competition, Jim, sits down next to him. Jim taunts him for picking up Burger Chef.

Peggy sits down with Pete and Lou after the meeting Pete informs her that they want Don to present the Burger Chef pitch to George Payton. She is clearly upset since she did all the work, but she accepts it since they convince George would take Don more seriously.

Joan runs into Bob at the office and welcomes him back. He informs her he wants to see her and Kevin, Joan agrees.

Peggy pays Don a visit, she reveals to him that she wants him to give the presentation to Burger Chef. She tells him she will introduce him at the pitch, and when he “rounds third he hands it back to her.”

Megan arrives at the office, and Peggy and Stan are thrilled to see her. Don is a little surprised to see her though.

Pete heads home to Trudy, and his daughter doesn’t recognize him. Byrna the nanny he has never met tells him that Trudy is at the hairdresser.

Don wakes up the next morning to Megan on his balcony setting out breakfast. Don says after they eat breakfast he is going to take her shopping.

Peggy calls Stan at home, she is at the office on a Saturday. She confesses to him that she thinks they need a better idea for the Burger Chef commercial.

Pete takes his daughter Tammy out, and when he returns he is shocked to see that Trudy still isn’t home. He tells the nanny to give Tammy a bath and then he will tuck her in. He calls Bonnie at the hotel and tells her he is going to be late because he needs to watch Tammy.

Peggy calls Don at home while he is making dinner with Megan She argues with him about the suggestion he made about adding a kid’s point of view to the commercial and Don hakes up on her.

Trudy arrives home late at night and finds Pete standing in the kitchen. He calls her out for not telling him her Dad had a heart-attack and informs her that she “can’t be out necking with guys on the side of the road” because she has a child. Trudy laughs in Pete’s face and informs him he isn’t a part of her family anymore.

Bob arrives at Joan’s house and provides her, Kevin, and her Mom with gifts. Then he invites them all out to the park with him.

Don heads into Peggy’s office and they begin bickering about the pitch. Peggy is afraid that Don is going to “pitch the hell out of her crappy idea.” Don tells her that he wants to help her, according to Peggy the only way Don can help her is to “teach her how he thinks.”

After their day together Bob and Joan sit down for drinks. Bob pulls out an engagement ring and Joan tells him to put it away, she reminds him that he “shouldn’t be with a woman.” He informs her he is leaving the agency and moving on to Buick and they require a “certain kind of executive,” like a straight married one. Joan informs him she wants love and she would rather die waiting for it to happened, “than make some kind of partnership.”

Peggy and Don are drinking and brainstorming ad ideas late into the night. Peggy reveals that she just turned thirty and she doesn’t know anything about the Moms in the commercial they are trying to put together. Don reassures her that she is “doing great” and offers her his handkerchief. She realizes that a perfect commercial would be if “there was a place where anyone could go and break bread and the people there were your family.” She writes it down and then Don takes her hand and they slow dance in her office to “I Did It My Way.”

The partners have a meeting and learn that they lost the account with Chevy, Roger is livid. And, he is even more livid when he learns they are considering naming Henry Crane partner.