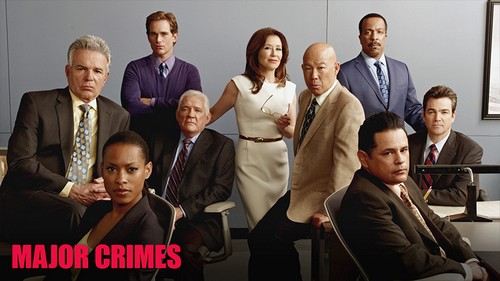 Tonight on TLC Major Crimes airs with a brand new episode. On tonight’s episode “Frozen Assets”, a wannabe detective helps the division probe the slaying of a dog that was left a $20 million estate by his deceased owner. As the squad digs deeper into the case, suspicions rise about the death of the dog’s wealthy master.

On the last episode shortly after being released from prison, a man who proclaimed his innocence is found murdered. The victim’s case is reopened and the squad works hard to solve a seventeen-year old murder. To the surprise of Raydor, Rusty confesses the reason behind his recent suspicious activity. Did you watch the last episode? If you mised it, we recapped it all right here for you.

On tonight’s episode the Major Crimes division faces a new challenge as they work to solve the murder of a dog that was left a 20 million dollar estate by his deceased owner. With the help of wannabe detective Jonathan Baird, aka Dick Tracy, (guest star Andrew Daly), the case takes a new turn as the squad begins to suspect foul play in the death of the dog’s owner, a wealthy heiress.

Provenza and Flynn were driving around with Rusty in the backseat when suddenly out of nowhere they were called to the scene of a murder. However, when they arrived on the scene, they saw “Captain” Baird in person otherwise known as the kook that thinks he’s a real detective by the name of Dick Tracey. When the lieutenants saw him — they realized that his call might be another made up story of his but he persuaded them to stay. He said a thirteen year old was killed. But as it turns out it wasn’t a child he was talking about.

The victim is actually a dog. The dog that was made an heir to a rather eccentric heiress’s 20 million dollars. And Baird believes both the dog and the heiress were murdered.

Baird thinks someone killed the heiress even though no one else does. She was Marcella Brewster and her family was very upset to have been written out of her will. His hypothesis is this – she was murdered with poisoned crab cakes – it was one of the few things she ate towards the end and he didn’t realize the danger until he gave those same crab cakes to the dog. Thereby making him the person behind the dog’s murder.

So they took Baird in for murder seeing as technically he admitted to killing the poor pet yet they were unable to prosecute him for animal cruelty. Ms. Brewster’s will has donated a lot of money to the LAPD. Money that would have stopped according to Assistant Chief Taylor if Baird is Baird wasn’t released.

Baird was being paid by trustees to look after the house and the dog. He failed protecting the dog but the trustees wanted to keep him on the parole. Which made the team question who the hell would hire Baird in the first place? The crazy couldn’t say because of the confidentiality agreement he signed though Marcella’s doctor wasn’t as hindered.
The dog died from arsenic poisoning. That part is true. Marcella was sick and whoever knew about her chemo treatment would also have known how easily they could hide poisoning within all the treatments she was getting. But there wasn’t a body to test. In one of the many wills she created; Marcella gave the bulk of her money to Eternal Meadows. And Eternal Meadows collected her body before the coroner could get their hands on the remains. They then incinerated the body, but weirdly kept the head.

Eternal Meadows are firm believers in giving people eternal life. They keep the heads of their patrons for percentages of their estates in order to one day bring back to life their patron’s head on a younger body. And to test Marcella’s head for signs of poison the police had to override her will and defrost her.

They wanted to see if she died the same way as the dog and in doing so they accidentally broke her will which clearly states that Eternal Meadows would have the bulk of her money only if they continued to maintain the preservation of her head. So Raydor feared they LAPD had been had. Did someone use them to break the will?

They talked to everyone who had been written out by Marcella and frankly Marcella’s relatives were too dumb to come up with such an elaborate scheme. But it was odd that both relatives mentioned how simple it would be to sell the house now that the dog is dead.

Marcella left her garish house to her dog. It was the one thing that never changed no matter how many wills she created. With Falcon out of the picture the house that had been decreasing the value of all the neighboring homes would be sold. That begged the question: how well did Marcella know her neighbors?

Well enough that Rusty witnessed one of them using the passcode to leave her house on the day the dog died. Remember, he was at the scene. Although he wasn’t too happy about being a witness once again. Mr. Kleiner, the stuttering and slightly foolish (because did leave behind the crab cakes) neighbor, killed Marcella and her dog just so he could get rid of her ugly house.

He used to babysit for the dog so he knew her passcode and when Baird tried to confront him Kleiner was spotted chasing him with a knife. Luckily e was spotted doing this by the cops.

Kleiner got a plea deal and Baird did another disappearing act. This time though he took something that rightfully belonged to Rusty. Provenza had written up a recommendation for Rusty so that the kid could get a job. The letter merely needed a name to be filled in. But Baird took it and used the glowing recommendation to get a job at retail security with the name – Dick Tracey!