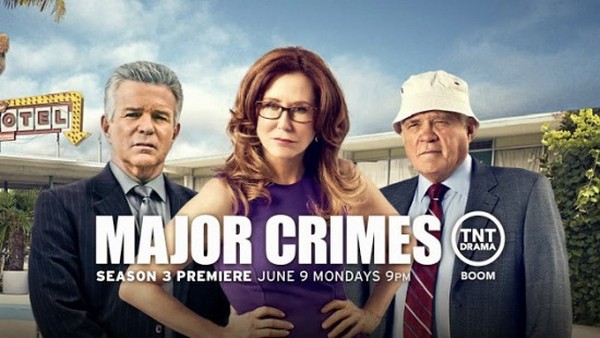 Tonight on TLC Major Crimes airs with a brand new episode. On tonight’s episode called “Two Options”, the shooting deaths of an elderly couple in their home prompts the team to join forces with the Special Operations Bureau to track down a deadly predator prowling Los Angeles and taking hostages along the way.

On the last episode after finding a young runaway murdered and thrown in a trashcan, the Major Crimes unit was led on a long, puzzling hunt to find the deceased girl’s killer and her identity. Meanwhile Raydor consulted her husband (guest star Tom Berenger) about a big proposition she had for Rusty. Did you watch the last episode? If you missed it we have a full and detailed recap, right here for you.

On tonight’s episode when SWAT officers working Crime Suppression discover an elderly couple gunned down in their own home, Major Crimes must team up with the LAPD’s Special Operations Bureau to hunt down a killer stalking the city of Los Angeles, and taking hostages along the way. Jon Tenney, Laurie Holden, Lindsay Price, Malcom-Jamal Warner, Bill Brochtrup, Brock Harris and Hampton Fluker guest star.

An elderly couple was found dead in their house. They were both executed and with a little digging the squad soon realize this case is bigger than a mere double homicide – the couple were also grandparents and their grandchildren were visiting when the older couple was killed.

They were only two bodies found at the scene so now their murder case has turned into a search for missing children. It’s highly likely they were kidnapped. And in the case of children it’s all hands on deck. Agent Fritz Howard is back helping the squad on the case and Police department has even hired on a woman to work on their PR during this time.

Sadly, though, now isn’t the time for PR. The detectives don’t need a third party coming and judging their actions because the bottom line is she doesn’t know a thing about police procedure. Take for the instance her suggestion they inform the mother about her kids. For all they know it could have been the mother that killed her former in-laws and warning her they’re currently looking for her children could provoke her to acting rashly.

The children are Mandy and Henry Lanier. They’re just young kids and according to reports they lost their father a few years ago. Since then their mother moved to the west coast and their father’s parents followed them out there. It all seemed pretty open and close. And yet the grandparents don’t have any furniture that’s older than three years and their mother also happened to be engaged to a guy no one remembers seeing. So not only does it look like the grandparents were in the witness protection program but their soon to be stepfather could also be the killer!

The police eventually managed to find the mother’s car. However the only person they found inside was the fiancée and he was dead. Someone had stuffed him in the truck afterwards so at least they know with his death that he isn’t behind all of this.

But it was the cat that helped them finger a culprit. The cat had an ID chip in it from before the Laniers moved out west. The chip revealed the Laniers used to be the Colliers. They had a son that was embezzling from the family company so they turned him and in and in return they were place in witness protection. Their son is charismatic and highly efficient. He managed to talk a former cell mate of his into being an accomplice and possibly murdering his ex-wife’s new fiancée for him.

Paul believes his wife and his children are still his property so he has no remorse towards what he did to his parents. And if he could that then the both the police and Dr. Bowman think he can’t be reasoned with. Gloria doesn’t not like that because it doesn’t look picturesque. Having officers storm a building and using snipers (even though they aren’t using actual bullets) doesn’t look the same as trying to negotiate with their murdering kidnapper.

Thankfully, she was overruled when it came time to free the kids from their father but Gloria’s actions still had consequences. Earlier she had told Sanchez he couldn’t fire his gun. He already shot at a suspect once this year and so she ordered him not to discharge. And he did keep his gun holstered but while he was struggling with Paul’s partner – he ended up getting shot.

No worries! It was artificial! As for the children and their mother – they were rescued by Agent Howard and the rest of the LAPD. Howard showed courage under fire during the rescue. It was him that took down their culprit and so Assistant Chief Taylor made him an offer. He had heard that Howard might be going to Washington yet Taylor thinks Howard could be more useful staying in LA.

Rusty was helping out in the squad room to get community service hours when Raydor assigned him to collect all the missing persons cases and ready them for the database. But it’s while he was looking over the case files – he realized that he does want Raydor to adopt him. He likes knowing that someone is out there prepared to look for him if ever went missing.