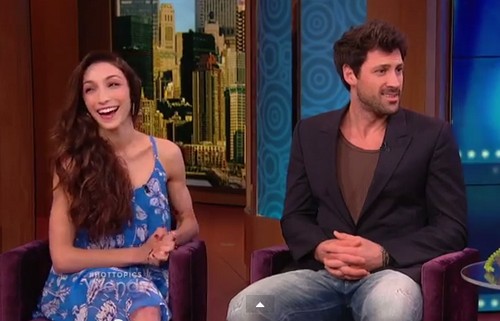 Meryl Davis and Maksim Chmerkovskiy launched endless rumors that they were dating after they wrapped up their Dancing with the Stars stints, but the hoopla died down after Maksim was linked to Jennifer Lopez. Everyone just assumed that he and Meryl were just playing up their relationship to guarantee their win on DWTS, but that doesn’t explain why they’re spending so much time together – even now, after the show is over and Maksim is *supposedly* dating Jennifer Lopez.

Oh, but Maksim is quite good, isn’t he? The guy just signed with ICM Partners, one of the big four agencies in Hollywood. We’ve been saying for a while now that he clearly wants to get into movies and TV, and now, here’s the perfect opportunity. He’s using all of his relationship connections to keep himself in the spotlight, all the while slowly launching an acting career for himself. He knows that people are invested in his relationship with Meryl Davis, so he’s giving the public exactly what they want.

Plus, the pic that he and Meryl uploaded on Saturday shows them being quite close. Perhaps they are dating? It’s very possible that Maksim is just hooking up with several different women at the same time, and that Meryl and J.Lo just occupy two separate parts of his life. From what all the sources are saying, Maksim and Jennifer definitely have a thing going on, so it’s also possible that he’s just using Meryl for publicity purposes. Or if we were to take the completely non-cynical version of this, we could say that he and Meryl are just friends, and thus, spending time together like friends do.