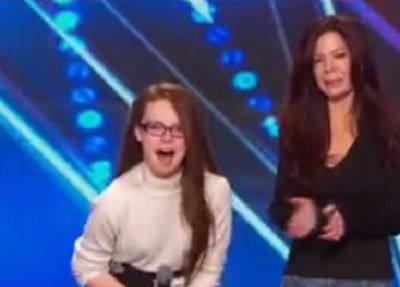 During Sunday night’s episode of America’s Got Talent, a young singer by the name of Mara Justine performed an amazing rendition of “And I Am Telling You I’m Not Going” from Dreamgirls. Everyone went on and on about how good she was and, honestly, we have to agree with the judge’s comments and the audience’s reaction. Nearly everyone in the auditorium gave her a standing ovation. We can’t wait to see what she does in the later stages of the competition; she’s definitely going to go far. Who knows? She might even win the whole thing!

On last week’s episode of AGT, there were some great acts and some really weird acts. One of the most memorable acts was a member of the United States Army named Paul Ieti who took the AGT stage and sang a song for the judges; he revealed that he just got back from deployment in Afghanistan. After his performance Mel B and Heidi and Howard all joined Paul on stage to give him a hug. Did you watch the episode? If you missed it, we recapped it all right here for you.

Watch the clip of Maura’s amazing performance below and let us know what you think in the comments section below. Are you keeping up with this season of AGT?