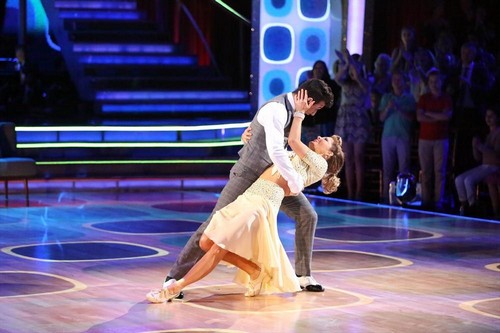 Mark Ballas has just been so seriously injured during Dancing With The Stars rehearsal that he might not be able to appear on the finals. His partner, Candace Cameron Bure, is in trouble if that’s the case – and for all intents and purposes, Mark might not be able to recover in time.

Mark and Candace were practicing their freestyle routine for the finale on Sunday when his shoulder reportedly popped out during a lift. He was taken to the hospital and treated immediately, and then released right after. However, even if the injury wasn’t stay-at-the-hospital-overnight serious, it might still enough to prevent him from dancing in the finale. Plus, Mark already has a history of shoulder problems, since he dislocated his shoulder during the 2007 finale of the show.

Considering that the finale is this Monday, it might be a risk for Mark to perform, especially since many of their dance routines do require some rigorous use of the shoulders. Should he pop his shoulder during the finale, he’ll be left with far worse than just a quick trip to the hospital.

Anyway, sources claim that Mark is ‘adamant’ about performing for the finale, so it’s likely that he’ll end up getting his wish in the end. However, another Dancing With The Stars pro will also learn the dance routine as a precaution, which means he can be on hand should any other emergency arise – i.e. Mark’s shoulder doesn’t heal in time or he can’t perform during the finale.

Do you guys think Mark will be ready for Monday’s finale, or will another pro have to take his place next to Candace? And if that’s the case, how do you think it will affect their chance of winning? Let us know your thoughts in the comments below.