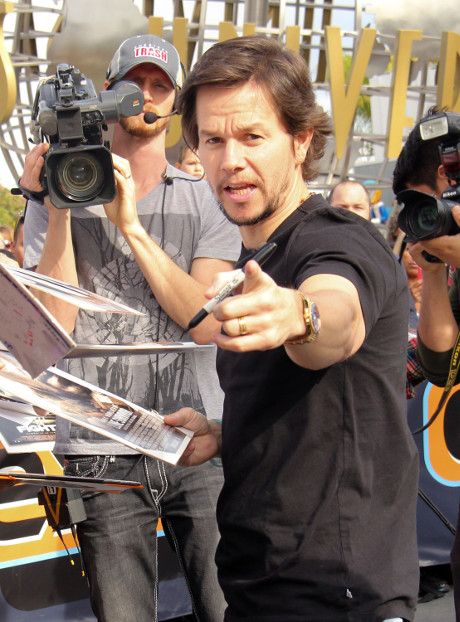 Mark Wahlberg, who’s never shy about expressing his thoughts and feelings during interviews, said that he wants to punch Harry Styles (and perhaps other One Direction members) in the face — but only after he’s given his children a chance to meet them first. After he gives his daughters the meeting of their lives and scores major dad points, then it’s no more boys. “Then it’s Rapunzel time,” he said in an interview with Conan O’Brien. The actor reveals that his daughters were once impressed with his movie career and his accomplishments, but now other feelings are starting to develop and he admits they’ve left him a bit jealous.

Wow, Marky Mark, tell us how you really feel. Mostly I find the Wahlbergs exceptionally annoying and unbearable, but this interview was actually really fun. I’m sure it has the poor boys of One Direction fearing for their lives because, let’s face it, if we had to put our money on Wahlberg or 1D, well, Mark would definitely get our bet.

Mark will be appearing in Michael Bay’s upcoming Transformers movie and he says that his kids are really excited to see him in that flick. But not as excited for their future meeting with their fave 1D members. Harry Styles, Louis Tomlinson, Liam Payne, Zayn Malik, and Niall Horan better wear their helmets and elbow pads to that meeting. They might need them.