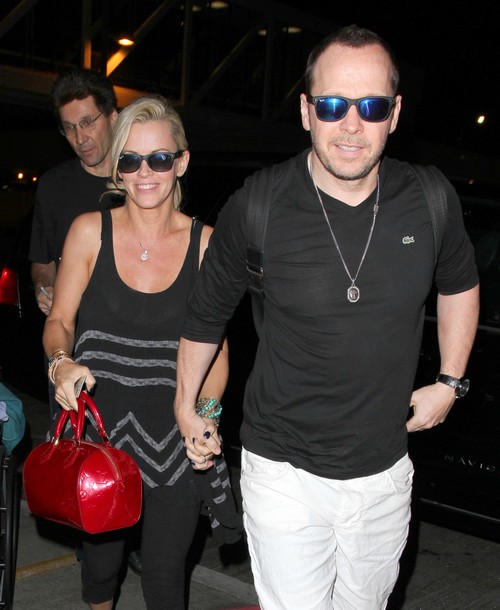 Mark Wahlberg didn’t attend brother Donnie’s wedding to – I mean actress, and television host Jenny McCarthy. A rep for Mark told E! News, he would be missing the wedding because he already had something planned on that day. His soon to be 11 year old daughter had a birthday party in Los Angeles. Her birthday is September 2nd, but Mark will be in Boston filming ‘Ted 2’ on that day. Now surely her party could have been re-scheduled. There has to be something more to why he skipped his brother’s wedding.

Multiple sources say that Donnie’s family, including his sister-in-law Rhea Durham, Mark Wahlberg’s wife, can’t stand Jenny and they’re not as close as Jenny makes it seem. Mark and Rhea especially hate Jenny she talked about them and her relationship with Mark Wahlberg and the Wahlberg family on The Howard Stern Show. During her interview she spoke too soon saying Mark and Rhea would be attending their wedding and approved of their relationship.

Today, Mark went on Twitter to congratulate his brother on his big day saying, “Congratulations @DonnieWahlberg and @JennyMcCarthy, so happy for you both today.” Donnie replied thanking his brother and sister in law “Thank you @mark_wahlberg. Thanks to you & @rheadur for the adorable video for me & Jenny! Please wish a Happy B-Day to my god daughter Ella!”

The Boston Herald “confirmed” the marriage was in NYC with 80 guests. Donnie currently stars on CBS’ Blue Bloods. While Jenny hosts a show on SiriusXM titled “Dirty, Sexy, Funny with Jenny McCarthy. “ This will be the second marriage for both.

Best Jenny better learn that the Wahlbergs don’t talk family business to the media – but Jenny is all about famewhoring so we’ll have to see how this works out.