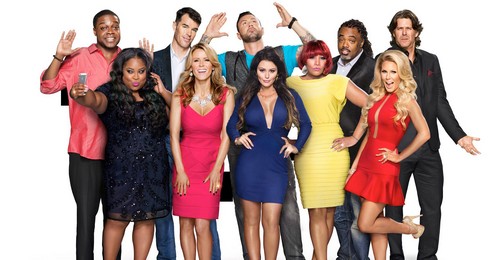 Tonight on WeTV their new drama Marriage Boot Camp: Reality Stars airs with another new episode. On tonight’s episode called, “Sex and the Secret,” the stars divulge their sexual desires.  WOWser that should be interesting, or not :-)

On the last episode things were changing now that the boot campers would have to go out on dates, but this time they were trading spouses. Things started to get intense between JWoww and Roger, when he found out that she didn’t listen to him. Did you watch the last episode? If you missed it we have a full and detailed recap, right here for you.

On tonight’s episode the stars divulge their sexual desires. Chaos erupts when JWoww’s secret is leaked to the press. Roger destroys property in a fit of rage. Clive leaves Tanisha hanging, while a couple bolts from the mansion.

Five “famous” couples face a whole new reality on tonight’s Marriage Boot Camp. And picking up from where we last saw them – Jenni and Roger’s happiness remains at risk. They were shown to be freaking out that a story about them was currently being shopped around and for some reason Roger was quick to blame Jenni for the story getting leaked in the first place.

According to Jenni’s people and InTouch magazine itself, the production team behind Marriage Boot Camp tried to sell them a story about Jenni’s medical condition. The reality star is pregnant and because it’s still early on in her pregnancy – the soon to be parents didn’t want to say anything at the moment. Much less have reported in some magazine before their family could even be notified. So now Roger is upset and he doesn’t even want to stay at boot camp if it’s going to be yet another media circus. However the production team vehemently deny selling out their cast members. They swear they haven’t said a word about anyone.

Though the promises don’t mean a lot to Roger. Because this situation has reminded him about the main problem he has in his relationship with Jenni. He hates having to deal with the public eye. And he also hates it when he feels like Jenni goes out of her way to court attention.

Communication drills is kind of necessary after the ordeal Jenni and Roger went through. So the directors created an open dialogue about sex. Jim managed to convince Roger to stay on at the boot camp but the exercise he gives the class has made everyone pretty uncomfortable. Including Tanisha! She’s tends to be open about everything else except for sex. Talking about sex makes her blush!

The open sex talk was a tad peculiar. The directors had them using puppets to express themselves and the only ones that indeed enjoyed the experience were Gretchen and Slade who took it as a joke. While everyone else were left being prickly when they asked for things like intimacy or in Clive’s case reciprocation. Apparently, Tanisha has a habit of going to sleep once she’s “taken care of”.

Also who knew that it was Kevin that wanted intimacy and Tracy who just wanted to get to the sex? So there goes the falsely accepted gender roles!

The next challenge the couples had to face was an obstacle course. One of them would be blindfolded and the other would be giving directions. And when either of them failed to communicate well with the other then both of them would be shocked by the censors the directors were controlling but the couples didn’t know about the communication part. They thought if they were doing the obstacle wrong then they would be shocked. So playing the game came as a bit of surprise.

Nearly everyone failed in the task and out of all them – Clive and Tanisha had to be the shocked the most by the directors. They were simply yelling at each other and just throwing blame rather than try to work together. So they failed and technically Trista and Ryan passed.

Trista gave her husband orders and he follows them to the T. They didn’t fight for power and so they weren’t shocked at all. Although going without fighting doesn’t mean their relationship is in the clear.

But this “test” has stirred up some deep seated issues with Tanisha and Clive. She says he hasn’t changed from the time she took off her ring and he accuses her of riding roughshod over him. At one point he yelled simply to get her to shut up.

Yet the directors caught on to what the couple was attempting to say to each other. Clive had left his wife floundering on her own during the obstacle and Tanisha’s short fuse didn’t help him help her. They both have issues and if they don’t face them head on then the sad truth is their marriage really ended some time ago.

As for Jenni and Roger, they had to leave the boot camp to fulfill an obligation of Jenni’s. And so their issues cropped back up. Roger doesn’t want this to be part of his future with her and that’s what made him come right and ask Jenni if she would put aside the reality career eventually and she told him “no”. She’s being honest when she says (without probably meaning to) her career comes first.

Roger knew that when he started to date her so whether they move on from there or not is up to him!