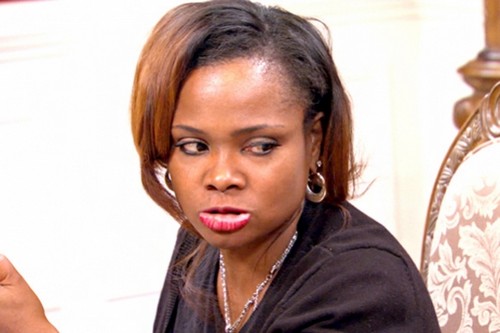 Tonight on Bravo Married to Medicine premieres with its second season called, “Love and Basketball.”  On it, Dr. Jackie tries to broach a big subject on a date with Curtis, while Toya and Dr. Simone face-off.

On last week’s episode the Queen Bees of medicine were back with a vengeance. Friendships had been broken as Quad discovered long-time BFF Mariah had been talking behind her back. Meanwhile, Dr. Jackie shocked Dr. Simone with news that she wanted a baby. Later, at Dr. Heavenly’s cocktail party, sparks flew as Toya accused Dr. Simone of inappropriate behavior with Toya’s husband.  Did you watch last week’s premiere episode?  We did and we recapped it right here for you.

On tonight’s episode Jackie’s date night with Curtis takes a surprising turn when she tells him about her plan to have a child. Meanwhile, Mariah talks her balding hubby into getting hair transplant surgery. After the showdown at Dr. Heavenly’s, Toya and Dr. Simonemeet to hash out their issues, but end up embroiled in even bigger conflict.

Even though that both Jackie and Heavenly had claimed to let bygones be bygones – the woman still have problems with each other.

Jackie didn’t like the way she was “ambushed” at Heavenly’s party. She felt that she was dragged into a fight that unbecoming of her and that all served to do was to drag her down to the other woman’s level. And Simone agreed with her.

They were over at Jackie’s and Simone expressed her own feeling about that night. She mentioned how Heavenly and even Toya tried to embarrass her in front of her colleagues. It was low point for her just as much as it was for them.

But Heavenly hasn’t let that night go. She’s upset about Jackie mentality towards weight. Heavenly feels that bigger or plus sized women aren’t necessarily unhealthy and that it was wrong for Jackie to simply assume so. Though she would be surprised to hear that Mariah agrees with her.

Mariah was going over the argument with her husband, Aydin, and she felt that Jackie finally got what was coming to her. For years Jackie has been telling people to lose weight and Mariah has always felt that her “friend” has sometimes gone too far. There is a time and a place to tell someone to get healthy and basically reducing a pageant queen to near tears in front of audience only goes to show that Jackie doesn’t know when to keep her mouth closed. At least according to Mariah and Heavenly.

Besides talking about weird dynamics of the frenemies clique – Mariah also brought up a possible hair transplant to her husband. When she met him, Aydin had long wavy hair and yet that’s obviously changed with age.

So will Aydin take his wife’s helpful advice or is he going to find a way to say no to Mariah?

It’s not easy saying no to Mariah and if you were listen to Quad then she would say that Mariah can be vengeful. However it’s Quad that’s been caught making fun of Mariah.

She was with a couple of her friends including newcomer Lisa Nicole when she felt it necessary to make fun of Mariah’s outfit at Heavenly’s event. Quad claimed she would never be caught in the outfit Mariah was “trying” to wear. And her friends were there laughing it up with her.

They only stopped laughing once Quad mentioned her potential business. It seems Quad wants to start an upscale puppy fashion line and Lisa Nicole along with her partner the infamous Dwight of Atlanta are planning to help make her a success.

Quad is so caught up in starting a business that she believes that it could be her baby …rather than the actual baby her husband is practically demanding they have. So she went to Simone for birth control options. She is that serious about delaying pregnancy in the meantime yet Simone had to be the one to remind her about Gregory and told Quad to speak to him. Because Quad shouldn’t be giving her husband false hope – it wouldn’t be right to leave him thinking they were trying for a baby when all the while she’s taking preventive measures.

Simone also found time to speak to Toya. Ever since the fight they’ve been giving each other a wide berth and Toya reached out to make peace. But the women can’t seem to agree on anything.

First off, Toya is swearing that she brought up the inappropriate dancing when it was just the two of them when the reality was that she confronted Simone during an argument about Heavenly. And at the time they were surrounded by several onlookers.

As for Simone, she’s still saying she did nothing wrong with Toya’s husband despite there being footage of her grinding up on him. So Simone storms off – claiming she actually has money making work to do and in her confessional she called Toya out for being closed minded. She alluded to the reason for this by saying Toya only had her family and so isn’t out in the real world.

Simone didn’t know that Toya had a fight with her husband on more less the same subject? He also thought she didn’t have it hard as a housewife and tried to diminish her role. That had angered Toya so Simone might never find herself again in Toya’s good books after her off the cuff remark.

It’s ok to want to stay home. At the end of the day not everyone can do it so no one should claim it’s easy.

Curtis understands this even if his wife doesn’t. Jackie got around to proposing a baby with her husband and he told her that it would be near impossible for them and he truthfully he thought the door was closed on the subject. They’re both busy all the time and it’s not like either of them is going to want to slow down with their careers or social life.

He thinks Jackie only likes the idea of a baby, but if Jackie says she’s ready shouldn’t her husband support her decision instead of doubting her?