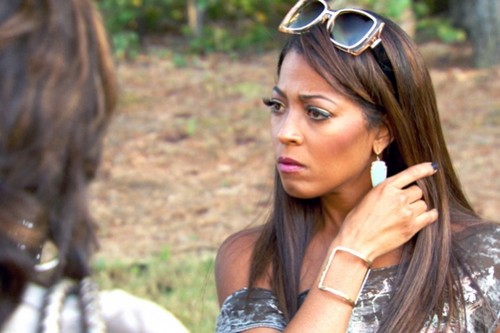 Tonight on Bravo Married to Medicine returns with an all new episode called, “A Steakhouse Beef” where there is an explosive confrontation between Quad and Mariah that impacts the medical community. Elsewhere, Dr. Jackie and Dr. Heavenly try to resolve their issues, and Toya throws a birthday bash for her son.

On last week’s episode Jackie’s date night with Curtis took a surprising turn when she told him about her plan to have a child. Meanwhile, Mariah talked her balding hubby into getting hair transplant surgery. After the showdown at Dr. Heavenly’s, Toya and Dr. Simone met to hash out their issues, but ended up embroiled in an even bigger conflict.  Did you watch last week’s episode?  We did and we have a full and detailed recap, right here for you.

On tonight’s episode a peace summit between Quad and Mariah turns into explosive confrontation that quickly spreads across the medical community. Dr. Jackie meets with Dr. Heavenly to hash out their issues, but realizes it’s not exactly the resolution she was hoping for. Meanwhile, Toya hosts a birthday party for her son; it’s all fun and games until Quad and Mariah’s feud becomes the talk of the party

The fallout between Mariah and Quad was finally explained. Now there is no video to prove who was at fault though the story, according to Quad, is she was trying to be a good friend to Mariah one day by telling her to take it easy with the alcohol when Mariah violently confronted her. Mariah insinuated that she made Quad relevant and that the other woman should be grateful. Quad didn’t like that and a small fight ensued with Mariah physically assaulting Quad. It led to Mariah getting kicked out of the restaurant. This took place a while ago, but since then neither woman has been able to overlook what happened.

Quad keeps going over the story and demanding her husband be on her side. It’s not Peter’s fault that he doesn’t understand. He simply doesn’t like scenes and so he warned his wife not to make another one.

Then there’s Mariah. She isn’t all that concerned about her former relationship with Quad. She talked it over with her family and yet she’s chosen to let the drama drop. Instead she’s focusing on her family.

Meanwhile Jacqueline has apparently taken something away from her conversation with Heavenly. She realized that she should probably take a gentler approach when discussing her patients’ weight. And by doing this, Jacqueline acknowledged that she did hurt someone with her blunt talk and so Heavenly should be happy. That is what she supposedly wanted the other woman to learn

Although it appears she’s not ready to let go of her grudge. Jacqueline invited both Heavenly and Miss Georgia Plus to talk at her office. She apologized to them for speaking like she did and Miss Georgia was able to move passed it. But Heavenly once again kept pushing Dr. Jackie. She wanted her to lose her cool.

Heavenly accused Jackie of being unable to turn the “doctor” off – you know like she’s able to. When the truth is Jackie doesn’t have the time to turn it off because she’s an OBGYN. She’ll always be on call and Heavenly, the dentist, will never understand her position. So Heavenly continues to be petty.

Yet Jackie did try and she told Simone that. Though Jackie is now starting to think Simone might have been right about Heavenly. She said the dentist was crazy and Jackie is willing to agree with her.

Toya is throwing a hug over the top bash for her son. It’s his second birthday and she’s pulled out all the stops. Her family tried to caution her and she ignored them. Then Heavenly walked into the party and the first thing she said was that Toya should have put the money to better uses. Like into a investing for her son’s future.

Funny how Heavenly can make unnecessary comments while Jackie can’t!

None of it is bothering Toya – she’s enjoying the party, but she does wish that more of the ladies would show up. She had invited Simone, Mariah, and Quad. And although Simone’s absence is to be expected she doesn’t get why the other girls won’t show.

Toya never knew what caused the fall out and it took Lisa Nicole and her sidekick to explain to her. And they once again repeated Quad’s version. Lisa had heard from Dwight and no one knows where he first heard it from, but what matters is that they’re taking Quad’s side. Even though Mariah is telling a whole different story.

Mariah went on a double date with Simone and their husbands. It was there that she told Simone that it was Quad’s friends that made a scene. And when they got into trouble with the restaurant people they chose to pin everything on Mariah. She said Quad stood by while she fell victim to the friends’ harassment. So that night made Mariah realize that Quad was only using her to get what she wanted which in this case means exposure. Because once Quad got it she no longer needed Mariah.

But Simone doesn’t believe Mariah’s story. She knows that Mariah must have left out parts that could prove to be embarrassing towards her. So Simone has suspended judgment rather than pick a side.

If only the other women were just as smart?