BY Kristine Francis on May 4, 2014 | Comments: one comment
Related : Recap, Television 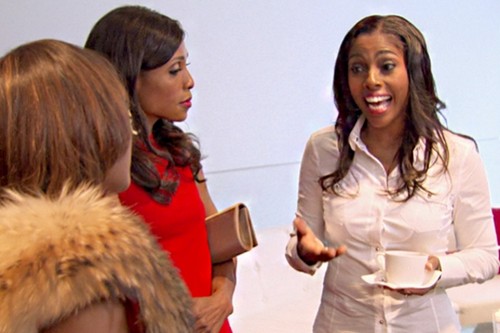 Tonight on Bravo Married to Medicine returns with an all new episode called, “Chariot of Fiyah!.” On tonight’s episode, Quad hires a designer to help launch her puppy clothing line. Meanwhile, Toya confronts Dr. Simone at Lisa Nicole’s speaking engagement; and Quad is pitted against Mariah in a fiery face-off.

On last week’s episode Mariah continued to deal with the fallout from her fight with Quad, but Quad turned her focus to developing her puppy fashion line. Dr. Simone and Cecil’s financial problems started to weigh heavily on their marriage. With Cecil away, Dr. Simone hosted a fun filled slumber party where she learned how to get her sexy back. Meanwhile, Lisa Nicole received some devastating news that could have turned her world upside down.  Did you watch last week’s episode?  If you missed it we have a full and detailed recap, right here for you.

On tonight’s episode Quad hires a new designer to help launch her puppy clothing line. Tensions flare at Lisa Nicole’s speaking event when Toya confronts Dr. Simone on her bad behavior. The fighting continues to spiral out of control as Quad and Mariah come face to face in an explosive showdown.

Financial problems at Simone’s office has had an impact on her family. Her kids don’t appear to believe her when she says that she can’t take them out of the country for a vacation. That’s not what they’re accustomed to. So they want to talk about Dubai and Japan while their mother is more Six Flags!

Another person that’s just running through money is Toya. She’s buying furniture for a house her husband hasn’t even closed on. Nor has said husband been invited to these “little” shopping expeditions because Toya prefers shopping without looking at price tags. Something she knows her husband has a problem with.

But honestly who on this show listens to their husbands anyways. Quad’s husband is still pressuring her to have a baby and she’s more focused on her puppy couture. She went to her good friend, Rico Chapelle, for help in designing her new line.

Rico is a fashion designer yet he’s never done the animal thing. He’s only willing to do it now as a favor for Quad. They’ve known each other for years and so obviously they love to share gossip as well as fashion tips. Which is why Rico started asking Quad about Mariah.

He was there that night they got into it and so he knows that Mariah was out of line. He’s still shocked by it. He’s known Mariah possibly longer than he’s known Quad and he thought the only person that walked away a lady that day was Quad.

Though if he were to look now then he would see Mariah act like more lady. She went for her check up with Simone and the doctor tried to stir up some drama. Simone told Mariah about Quad’s baby situation which really wasn’t her business.

Simone says she wants Mariah and Quad to get back together. And to prove that she asked Mariah to come to an event that she knows Quad will be attending. Simone says that the two should talk and because it’s Simone – Mariah says she’ll see. Originally she was busy with her husband’s consultation, but she’ll see if she can make it.

Do you know whose going to this event for sure? Heavenly!

Heavenly who constantly disagrees with the other women is going to a women’s empowerment event. This is the same woman that will use her position as productive working woman that also submits to her husband to rub into everyone else’s faces. She feels like they’re in the wrong when they spend too much of their husband’s money or god forbid put their career first.

This event is all about women encouraging each other and yet the guest list is compiled of a bunch of bickering backstabbers. And this event is being held by Lisa Nicole. She’s everyone’s friend so shouldn’t they have arrived on their best behaviors.

Sadly should and did are completely different terms. Guess respectful was too hard for them because Toya decided to greet Simone with “there won’t be any yelling today”?

That got them off on the wrong foot and no one was able to help. Lisa Nicole tried and even Quad attempted to intervene, but at the end of the day Toya is mad that her friend never apologized for grinding up on her husband and Simone denies that incident ever happened. So Simone has taken to calling Toya a dumb housewife.

They couldn’t even refrain from arguing in the tranquility room.

Lisa Nicole delayed her check up with doctor to do this event and she admitted that to her audience. So that’s evident enough about how strongly she feels about what she trying to accomplish with the Women Empowerment Network. Yet none of that mattered to women with cameras.

They’re already drawing attention with their reputation and with the cameras, but when they get loud then it becomes too much.

Mariah arrived at the event and she was polite to Quad though the other woman didn’t return the favor. Quad didn’t take the small peace offering because she felt like her feelings were being swept under the rug and she wanted Mariah to acknowledge how she was hurt. And Mariah isn’t going to do that.

They were actually back at the Tranquility room when the argument erupted. Simone had asked Mariah how was it being near Quad again and Mariah was honest – she felt insulted after Quad rolled her eyes at her. But Quad had overheard Mariah saying disparaging things about her and so she pushed into that conversation.

Then Heavenly put herself in the middle. She told the arguing two that they still love each other and so why don’t they start from there. Yet Quad didn’t want to let go what happened earlier. Mariah had said some awful things and she wants an apology. Or if not then she at least wants Mariah to admit she was in the wrong.

Although this proves to be the wrong place for all of this. They’re arguing in front of strangers and Mariah had felt since the last time that Quad plays up to an audience so it would have been better to have a one on one. Like Simone suggested (when it was too late)!

The only person to have stayed out of the fray was Jackie.