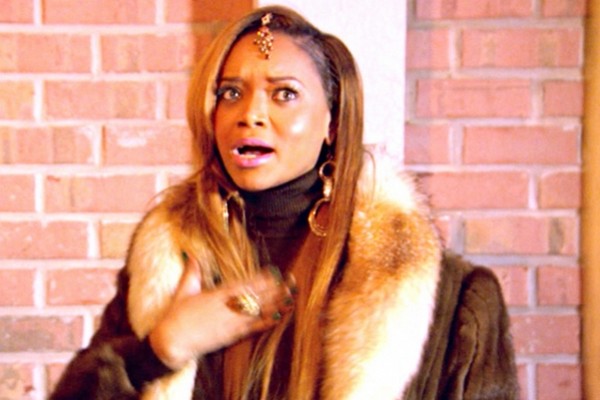 Tonight on Bravo, Married to Medicine returns with an all new episode called, “From Courtroom to Catwalk.” On tonight’s episode, Quad and Toya face off with Mariah in the courtroom, lending their support to Reco Chappelle, as he disputes Mariah’s restraining order.

On last week’s episode the ladies’ mission to have a peaceful trip proved to be impossible when their drama followed them to Blue Ridge. Tempers flared once Quad learned that Simone secretly invited Mariah along. Mariah decided to embrace the outdoors and left her mark on the wilderness. Later an intense relationship exercise stirred up emotions for many of the couples, leaving Jackie in tears and brought Quad and Greg’s marital issues to a head. Did you see the last episode? If you missed it we have a full and detailed recap, right here for you.

On tonight’s episode Quad and Toya face off with Mariah in the courtroom, lending their support to Reco Chappelle, as he disputes Mariah’s restraining order. Meanwhile, Jackie is visited by her stepdaughter Kursten, who reveals something surprising. Later, Mariah decides to extend a peace offering to all the ladies by inviting them to the launch of her new business venture. Then, after all her hard work, Lisa Nicole unveils her design collection to Atlanta and the world.

Tonight is going to be another great episode of Married to Medicine and you know there will be laughter, drama, and, of course, “shade.” Tune in at 9Pm EST when we’ll be recapping it right here for you but in the meantime, hit up the comments and let us know how excited you are for season 2 of Married to Medicine.

Tonight’s episode begins with everyone back at home and Toya and Quad heading to court to support Reco as he battles with Mariah because of their confrontation at Quad’s fashion show. Mariah is a little nervous as she gets ready for her court date. Quad is doing her drama thing before even getting to court, talking about the “trumped up charges.” Meanwhile, Lisa Nicole’s samples are damaged amd she does not find out until the models are trying on clothing for the final fitting. Lisa is very upset and takes out her frustrations on Dwight. He tries to calm her and he assures her his assistant is on the way to mend any damaged items.

Reco’s case was dismissed despite Mariah pleading her side. Quad, Toya, and Reco walk out of the courtroom, happy that they are done with the issue. Mariah gets right back to work and is at a photo shoot for Cinnamon Girl. The make-up artist at the shoot tells Mariah that word on the street is that drugs are involved. Mariah agrees that he seemed to be on something. The ladies she is gabbing with cannot believe her friends voted her out of their group after Lake shares what happened.

Dr. Jackie greets her step-daughter Kursten at her office. She is in town for Lisa Nicole’s fashion show in her pursuit to become a model. Jackie is helping her to fulfill her dreams. Kursten tells Jackie that she sees her as her mother. It meant so much to Jackie to hear that from Kursten. Jackie thinks this may help her as she gets over her sadness of not having a child of her own.

Mariah’s launch party is coming soon and she decides to invite all the ladies to extend the olive branch. She wants to take the high road in this whole thing. She makes the invites very personal and hand delivers each one. Simone is very happy to see her good friend. Mariah shows her the invitation and she confirms she will come. Simone made a decision after the retreat that she should not sever her friendship with Mariah because Mariah did nothing to her personally.
Heavenly seems to have a change of heart about Mariah when she drops off her invitation and gives in to offering her a chance as Simone did. She appreciated the fact that Mariah personally delivered the invite as it showed an effort to make amends with the ladies. She called Simone immediately after Mariah left and the two decide to go to her launch party.

It is moving day for Toya and she already plans to have every room done how she wants it, no matter the cost. She is happily planning all the wonderful events she can host at her new, very large home. Meanwhile, Simone is singing the praises of her husband because of his patience as she tries to balance her work/home life. Busy at her fashion show, Lisa Nicole prepares to show four collections and she is making sure everything is perfect. Lisa Nicole is flipping out when the sign with her name goes missing and Dwight is wasting time (as far as she thinks) on worrying about the lighting on the runway that she already feels is perfect.

Everyone begins to arrive to the fashion show and her friends are noticing every detail that is very well-done. Lisa Nicole is going through the clothing as the ladies prepare for runaway and notices make up on clothing and dresses in the wrong area and she gets even more stressed out. Heavenly and Simone talk about the success of the retreat and what a great time they had. Heavenly tells Simone that she feels Cecil and Simone balance each other out well. Darren and the kids come to see Lisa Nicole as she gets ready. Quad and Reco arrive and head backstage.

The show begins and, of course, Quad has her side remarks about what is wrong with it. Toya loved her designs and wondered why she wasn’t one of the models in the show. Jackie is super proud of her step-daughter. Lisa Nicole’s show is over and she walks the stage with Darren and the kids. Quad, who was making her side remarks earlier, didn’t have any complaints as she told Lisa Nicole how amazing everything is.

When the ladies are together after the show, Toya had to start in asking everyone if they were surprised to see Reco because he is not incarcerated. While Quad tries again to keep everyone against Mariah by calling Simone on trying to get everyone to give her a chance. The two take their conversation outside of the group and Simone tells Quad that she feels that Quad is holding her hostage when it comes to having a friendship with Mariah. Quad tells her to “do her thing” and Simone says she plans to and walks off, leaving Quad with an open mouth asking “did she just walk away from me?” Yes…she did.

Next week is the season 2 finale, so don’t forget to check back next week, same time, same place! So, CDLers…are you Team Mariah or Team Quad?