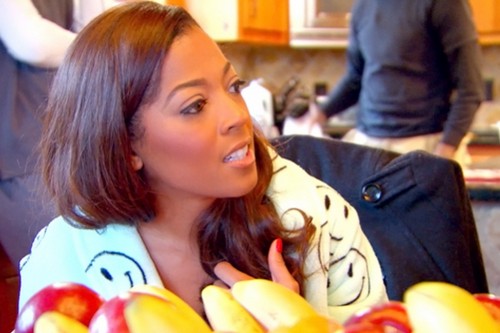 Tonight on Bravo, Married to Medicine returns with an all new episode called, “The Flight of the Uterus.” On tonight’s episode, the ladies’ mission to have a peaceful trip proves to be impossible when their drama follows them to Blue Ridge.

On last week’s episode as the group’s long awaited couples retreat approached, Simone encouraged Mariah to make a surprise visit. The couples arrived in the Blue Ridge Mountains, eager for a break from the constant drama of Atlanta’s medical circle. Greg made a controversial statement that upsets several of the wives, and a conversation about adultery lead to a shocking revelation about Darren and Lisa’s relationship. Did you watch the last episode? If not we recapped it all here for you.

On tonight’s episode the ladies’ mission to have a peaceful trip proves to be impossible when their drama follows them to Blue Ridge. Tempers flare once Quad learns that Simone secretly invited Mariah along. Mariah decides to embrace the outdoors and leaves her mark on the wilderness. Later an intense relationship exercise stirs up emotions for many of the couples, leaving Jackie in tears and bringing Quad and Greg’s marital issues to a head.

Tonight is going to be another great episode of Married to Medicine and you know there will be laughter, drama, and, of course, “shade.” Tune in at 9Pm EST when we’ll be recapping it right here for you but in the meantime, hit up the comments and let us know how excited you are for the new season of Married to Medicine.

Tonight’s episode begins with the couples still on their getaway. Simone is lying in bed on the computer when her hubby comes in and teases her about the fact that she didn’t wake him up for some lovin and the two are giggling and having fun. Jackie gets a call from her husband, who is on his way to meet the group. Quad, Lisa Nicole, and Toya talk and Toya shares that Mariah may come because of Simone’s invite. The ladies go to the kitchen and everyone starts filing in to eat.

Quad actually has her “glam squad” doing her hair while they all group together in the kitchen. Simone gets upset when Quad asks if Simone invited Mariah. Simone admits she did but explains it was to make peace among everyone. Simone speaks to the ladies and gives them her reason for inviting Mariah. Simone takes so much heat that she says she gives up and will never ask them to be together as a group again. Toya and Simone then go at it and Toya gets really upset with Simone because she has forgotten important conversations, and Toya walks off. Toya is very upset. The bad vibe is broken, at least for Jackie, when her husband arrives.

Mariah is packing for her own little getaway and none of the ladies are included. She was invited by her party planner to stay at an estate and get some royal treatment since he heard how mean her friends have been towards her. Trey welcomes her to the Vinewood Estates. Lucy joins Mariah and they have food, drinks, and good friends. Mariah’s friend Sharika, her sister Lake, and Maryam join the fun. Meanwhile, at the cabin, the men are outside having cigars by the fire and talking about Greg’s comments on cheating from earlier. No one seems to agree with him and all the men actually try to school him on Respect 101.

Mariah’s party includes a walk through a wooded area, wine, and roasting marshmallows. She thanks her friends for all the love. Meanwhile, back at the couples retreat, the couples were asked to write down issues they have with others so they can be addressed and dealt with as a group. The first question is how often the couples should be having sex. Each couple is supposed to give an answer. Lisa Nicole says that if her man wants it, she is willing to please him, regardless of whether or not she is in the mood. The issue of second chances comes up next.

They talk about cheating and Lisa Nicole talks about how hard it was to deal with Darren’s cheating but they talked about the counseling and work they’ve done since. When Greg goes to answer a question Quad just gives him an evil stare in anticipation of what he is going to say. Greg talks about his needs and how he wishes Quad would focus more on family and basically, pleasing him, instead of all her projects and ventures. Quad says she cannot think of starting a family until she is making the money she wants to make. Jackie shares something that has weighed heavily on her mind about not being able to give her husband a son yet. The couples say goodnight after an eventful night and head to their rooms.

The couples head out to play football. They all have a blast as everyone is really getting into it. Later, Jackie and her husband sit by the fire and she gives him a rundown of everything that happened before he arrived. Curtis tells her that he will do what he can to support her and make her feel better about not having kids. He understands her need, he tells her, but realizes it is not going to happen.

Quad tells Greg that she has been thinking about getting on a contraceptive because she is not ready to have a baby yet, despite her husband’s desire to have a child now. She explains her reasoning and tells him that while she does want a child one day, she wants to wait until she has earned her own money first and make something of herself first. They come to a decision that Greg will support her in her projects, but Quad will wait 3 months before getting an IUD.
The couples begin packing to leave and everyone talks about the good time they’ve had. The ladies all chat at the table and decide that Mariah will not be invited to any group events. Quad is very happy about the decision, but it seems that Simone is still uncomfortable with it.

Next week is Lisa Nicole’s big fashion show and she is stressed big time as there are lots of problems in store. Simone faces off with Quad about Mariah as well. Don’t miss our recap next week of the season finale of M2M!