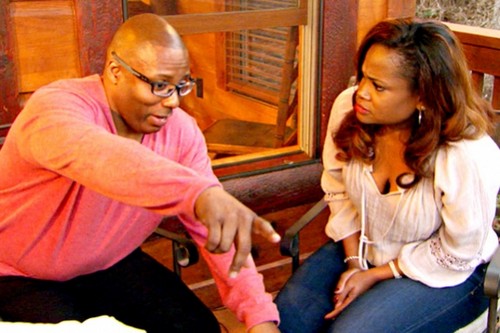 Tonight on Bravo, Married to Medicine returns with an all new episode called, “Couples Retreat.” On tonight’s episode, as the group’s long awaited couples retreat approaches, Simone encourages Mariah to make a surprise visit. The couples arrive in the Blue Ridge Mountains, eager for a break from the constant drama of Atlanta’s medical circle.

On last week’s episode Simone enlisted Jackie’s help in a scheme to resuscitate her flatlining love life. While Simone sprang a romantic surprise on Cecil, Jackie’s babysitting skills were pushed to the limit when Simone’s kids wreaked havoc on the house. Meanwhile, Quad’s business ventured leads to a heated argument with her husband that threatened their relationship. Toya and Eugene encountered an unexpected financial problem. Did you watch last week’s episode?  If you missed it we have a full and detailed recap, right here for you.

On tonight’s episode as the group’s long awaited couples retreat approaches, Simone encourages Mariah to make a surprise visit. The couples arrive in the Blue Ridge Mountains, eager for a break from the constant drama of Atlanta’s medical circle. Greg makes a controversial statement that upsets several of the wives, and a conversation about adultery leads to a shocking revelation about Darren and Lisa’s relationship.

As the group’s long awaited couples retreat approaches, Simone encourages Mariah to make a surprise visit. The couples arrive in the Blue Ridge Mountains, eager for a break from the constant drama of Atlanta’s medical circle. Greg makes a controversial statement that upsets several of the wives, and a conversation about adultery leads to a shocking revelation about Darren and Lisa’s relationship.

Tonight’s episode begins with Jackie and Curtis talking about their trip. Curtis has to join up with the group a day late because of a prior obligation. Mariah, meanwhile, meets up with her choreographer. She is performing a dance at a family wedding. Simone shows up at the studio and Mariah takes a break and the two talk. Simone tries to be the peacemaker again, but Mariah just can’t do it. Mariah is surprised that Simone is still asking her to talk to Quad. But…it seems like Simone has another motive. She knows that Mariah is the core of the group, and if the dynamics of the group change so that Mariah is no longer in the circle, nothing will be the same. Simone encourages Mariah to just show up as a surprise when the couples are on their retreat. She may be on to something!

Cecil and Simone are all packed up and ready to go. Jackie is ready to go as well. Heavenly’s hubby will be a day late as well. Driving to Blue Ridge, Lisa Nicole and Darren argue over directions. Greg is starting off the trip with some negative comments about Quad’s attire. Toya and Eugene are having a nice drive talking about their new home. Everyone arrives and the party is starting! Simone tells Heavenly and Toya about her invite to Mariah. They cannot believe it but Toya is most upset. Toya and Simone start with some passive aggressive nonsense when Toya is not listening to Simone discuss the sleeping arrangements. Heavenly tries to make the peace. The race is on to the second cabin to get to the only other large bedroom. Toya and Gene made it.

The first night is Flashback Friday and the couples will be sharing pics and stories of how they met and their college years. They all go back to their rooms to get settled in and plan to meet back later. Meanwhile, Mariah has her marketing consultant, husband, and mom trying out her protein drinks for her Cinnamon Girl product line. They love the first sample and talk about the launch party. Mariah plans to invite the girls but whether or not Quad will get an invite is still up in the air.

The ladies go shopping in Blue Ridge and get a little grossed out at the general store where they sell crickets for eating. Toya, Eugene, Greg, Heavenly, Simone, and Darren are all outside talking. Toya starts to open up the discussion in an effort to get to know everyone better. Greg says he may come up with a new clinical term this weekend for how he would describe the women after Eugene asks him to name the disorder he’d say each of the women have.

The conversation switches to Toya being a little abrupt with Eugene when he asked who she was texting in the morning. The convo quickly shifted to trust and checking cell phones. Toya readily admitted to checking her hubby’s phone in search of unusual numbers. She admits to having trust issues. Greg takes the conversation in a whole different direction basically saying how he understands how some men easily cheat. He says how hard it can be to pass up a beautiful woman that approaches because men are always being tempted. Everyone is pretty floored by his comments, including the men. Greg is basically saying that if a man is not being treated right, they have the right to cheat. He even says “It is hard for a man not to cheat.” Not the best topic for discussion because more and more dirt comes out.

Darren ends up sharing how he cheated for years on Lisa Nicole…but that he’s been faithful the last eight years.

Apparently, this is nothing new to Lisa Nicole, but it is to all the company. When the group is all together, the ladies question Greg on his comments and now Quad is there with her listening ears on and doesn’t seem too amused.

Next, everyone has some fun by showing old photos and dressing in their 80s best attire. Toya passes out pics that she brought and even hands out a private letter written by Eugene after their first time. Everyone talks about how they met and shares their love story with everyone. Heavenly shares that her hubby impressed her when they first met because it was the first man she met that was smarter than her! The couples put the music on and start dancing. They are all bonding and having a good time.

Meanwhile, back at home, Mariah and he husband talk about how things are going with the friends. Mariah shares that the ladies seem to be bonding with Quad because she keeps dishing details while Mariah has been more guarded. Mariah decides to head on to the cabin to pay her surprise visit! Oh, wow, things will really heat up now. Her hubby cannot join her, so she is going to brave the trip alone.

Meet us here next week because the recap will be full of more couples-retreat drama.