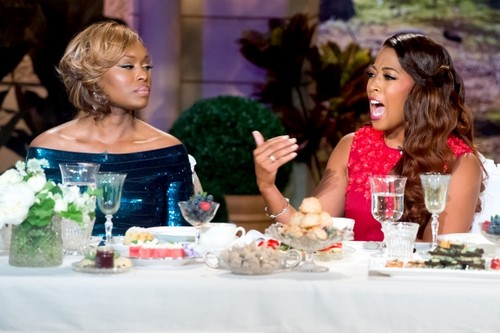 Tonight on Bravo, Married to Medicine returns with an all new episode called, “Reunion Part 1.” On tonight’s episode, host Andy Cohen reflects on some of the season’s most talked about moments, as the MDs and Mrs. MDs come together in part one of the explosive Married to Medicine reunion.

On last week’s episode Toya showed off her new extravagant home to Dr. Heavenly who had a lot to say. Meanwhile, Quad was finally ready to launch her puppy couture line with a fabulous fashion show. Everyone, except Mariah, showed up to support Quad. Did Quad succeed at getting the investors she needed to help her company take off? Did you watch the last episode? If you missed it we have a full and detailed recap, right here for you.

On tonight’s episode host Andy Cohen reflects on some of the season’s most talked about moments, as the MDs and Mrs. MDs come together in part one of the explosive Married to Medicine reunion. Mariah and Quad finally come face to face to reveal the truth about what really went down between them; Heavenly hears from the ladies on what they really think of her; Simone and Toya’s disagreement on stage spills over to backstage, putting the rest of the Reunion in jeopardy.

If you were a fan of Season Two of Married To Medicine on Bravo then you must be excited to see part one of the reunion. Bravo has followed the lives of a few of Atlanta’s top docs and a few doctor’s wives as the ladies have all navigated through business while running in the most elite circles. This reunion gets ugly right from the jump when the entire cast gangs up on Mariah. She has been a lightening rod for trouble all season and all of the ladies are pissed because she likes to throw her title of Executive Producer of this show in their faces. While the title is her it seems to be a vanity thing because Andy all but confirms that there is no power attached to it.

Dr. Heavenly joined the cast this season and aside from being a dentist she considers herself a relationship expert. She has ruffled feathers by telling the women to submit to their men and let them be the leader. Dr. Jackie informs Heavenly that part of the anger is because she tried throwing at advice to women that she knows nothing about. She admits that she didn’t know them at all. Heavenly actually admits that she came on harder because Mariah put the bug in her ear that she should go hard on the women because the doctors’ weren’t making waves. Heavenly also claims that Toya is kind of stupid and that Jackie and Simone have mental problems. They fighting and mud slinging is endless.

Now we move on to the blow out fight between Quad and Mariah. They used to be best friends and as usual Mariah spent quality time trying to run Quad into the ground. Both women insist that the fights were real and they are both mutually hurt by the fallout. Mariah has said some horrific things about Quad calling her a hood rat and saying that she dated a drug dealer. Heavenly gets dragged into it and says that Mariah has talked a lot of crap to her about Quad and after much negativity comes out Mariah finally apologizes. Quad here’s it but isn’t rushing to be her friend.

Sine we’re talking about the ladies fighting that revisting Simone and Toya’s season-long spat was inevitable. Simone has spent a lot of time insulting Toya’s intelligence after dancing up on her husband.   The whole issue between these two is respect. Simone thinks that Toya shouldn’t have felt disrespected and since they were supposedly friends in real life Toya should have told her she was mad before the cameras were rolling. Toya insists that she did try and get things cleared up but she and Simone aren’t that close. She proves it when Simone can’t recite Toya’s phone number or street address. . Simone tells her that they will now never be friends.

Backstage we get a glimpse of Toya and Simone’s backstage fight which seems to escalate to fists flying. You’ll have to tune in next week to see what happens next on the Married to Medicine reunion.