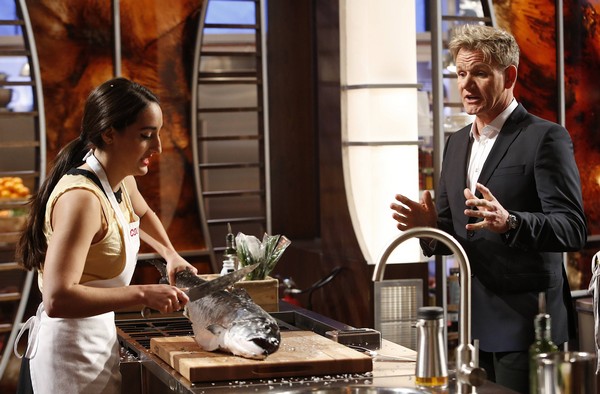 On the last episode, in the next challenge, the remaining 14 home cooks split into two teams and took command of the kitchen at Dinah’s, one of the busiest and most iconic diners in Los Angeles. The stakes were high as the contestants would prepare classic American fare for the restaurant’s regular diners. The team that received the most customer tips would be safe from elimination, while the losing team members would face an intense pressure test, during which they had to make an elegant and delicious three-layer red velvet cake. Find out which contestant rised to the challenge and whose efforts fell flat. Did you watch the last episode? If you missed it we have a full and detailed recap, right here for you.

On tonight’s episode, the remaining home cooks face the most intimidating Mystery Box challenge yet, when they go head-to-head with the judges to prepare a restaurant-quality dish using the most exquisite wild Alaskan king salmon. The winner of the Mystery Box challenge will be safe in the next elimination round, during which the home cooks will need to create a dish using a selection of one judges’ favorite ingredients. Find out who will advance to the next round and which home cook will flounder under pressure

RECAP: Tonight’s episode begins with us seeing inside the mystery box and there is a knife and nothing else whatsoever, Elise believes things will get cut throat now; under the big mystery box is several massive salmon. They need to use the salmon and cut clean them on their own; slicing them up perfectly. Their 60 minutes start right now, the chefs are picking their ingredients and slicing their fish; Ramsay is moving fast at cutting his own. He’s easily done it all by the time the chefs walked to the pantry, Graham is now his turn to cook. Ramsay goes over to check on Christian who will be making his own New Orleans style Salmons, Christine’s salmon looks so ugly; she completely destroyed the fish. Graham is already done cooking his whole meal; he made a crispy skin fish with a small salad and lemon yogurt. Elise calls for a medic, she is shaking and almost passing out; the pressure is so intense.

Gordon says that Elise has left the kitchen, Joe tells Graham that he made a wonderful dish and has a future in cooking. Elise comes back for 20 minutes to cook her fish, she wants to at least get something on the plate. All the other chefs are proud of her and respect her for coming back even with losing some time of her own, Ramsay hopes she can do it.

The time is up and the chefs are finished with their dishes, the judges take a look around the room trying to find 3 dishes which stand out; first up is Christian. He made a blackened salmon, Gordon says he has a lot of balls to do what he did tonight; it’s cooked beautifully. Gordon loves the heat and the taste of the fish, he commends Christians great work. Graham says the sauce and mix of spice is absolutely amazing; it’s one of his best dishes. Joe takes a bite and says it’s nothing he’d order, but at the end of the day it is delicious and believes he could win tonight’s mystery box.

Next up is Elizabeth, she made a Baked Salmon and Joe says he’s impressed she decided to bake the fish; it’s very well done and believes it could be a real winner. Gordon loves it and believes it’s a smart dish.

The winner of this mystery box is Christian, he can’t believe he did it and is so happy to be the king of the kitchen; Gordon said what he did was something nobody would logically attempt and execute so perfectly.

Now for the advantages tonight he will not cook tonight to be kicked off tonight, whatever Gordon, Graham and Joe put in their baskets will be given to any contestant Christian wants. Joe got a bunch of ingredients that focus primarily on Italian food, Graham gets a bunch of stuff he’d buy at a farmers market and Gordon’s basket is full of stuff he likes buying in the UK. Christian, chose Joe’s basket; it’s pretty fancy and might be complex for the contestants.

Their 60 minutes start now, but before it happens Christian gets one more advantage; everyone gets an hour but he can choose one person to have 30 minutes to cook their dish. Christian chooses Courtney because he think she is a strong chef.

The chefs are all at work, Cutter is cooking a flat bread pizza; Gordon says that he has a very small time slot to do this in and it’s something judges may not want to see. Courtney now gets to it and starts cooking her dish in the 30 minutes she has left. Elise is making her home made pasta, Gordon asks how she is doing and she messed up her dough and is really confused on what to do.

Gordon goes over and tells her to never give up, he salvages some of her pasta dough and tells her to continue on it; he knows she can do it and Elise thanks him for getting her confidence back. Courtney is making a mushroom ragu with baby artichokes on top, Christian hopes she goes home today. Willie is making a tomato soup with a fried egg on top and flat bread. Gordon is super worried about Elise, Gordon says this is very weird what Ahran is working on; it seems more like a desert.

Their time is up and now Courtney is the first one up, she made a spaghetti with her ragu; Courtney took the timer as a compliment and worked hard. Gordon says she made a delicious dish and believes the advantage used wasn’t the best on her. Graham says it’s a really great dish, Joe takes a bite of her spaghetti and Christian says she played it super safe; though Joe says he wasted his advantage.

Next up is Cutter, he made a small pizza and Gordon looks like it should have taken 10 minutes; he is just really unimpressed with it’s presentation.

Gordon says it looks like a kids pizza, he takes a bite and says it isn’t Master Chef at all. Joe goes up and says that the ingredients meant a lot for him; he spits it out and says it was just a waste of time of a dish. Leslie made a hand made ravioli, Graham says it was great technique but the plating just doesn’t look so good. Willie comes up and makes a tomato soup and says he’d give it a 8, Gordon says it’s not good at all. Christine is coming up and brins a mushroom caramel, Joe takes a bite and loves the pasta a lot; he’s happy with the dish. Ahran comes up with her savory tiramisu, Gordon asks if she has been drinking. Gordon takes a bite and hated that idea but believes it is insanely delicious; he can’t find much wrong with it. Elizabeth comes up now and has a breakfast lasagna, Joe takes a bite first and says it’s amazing; it’s a great use of his beloved ingredients. Next up is Elise, she made a mushroom ravioli; the tomato sauce needed a lot of seasoning. Gordon asks if she gave up, because he dish tasted like it.

Graham announces the two dishes that are at the top of tonight, Ahran was the second best; but Elizabeth got the top fish of the night. Gordon calls up two obviously bad dishes, he calls over the chefs who are responsible for being up there should go up; Elise goes up and Cutter is summoned as well. Gordon tells Willie his was bad but the other two have been horrible, Cutter has been at the bottom for the last 5 challenges; he’s too stubborn to progress. Gordon announces that the one leaving tonight is Elise; Gordon says for her to go back home and figure out how to bounce back when making mistakes. Gordon mentions he’s made tons of his own and she can comeback.