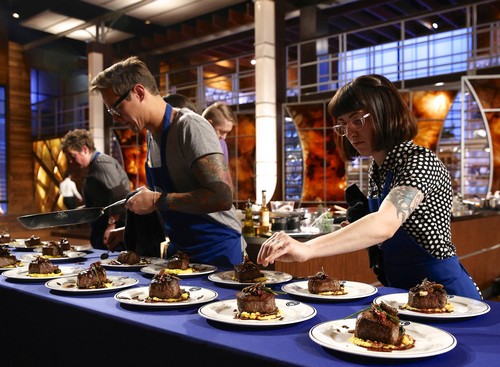 On the last episode, the remaining home cooked face the most intimidating Mystery Box challenge yet, when they went head-to-head with the judges to prepare a restaurant-quality dish using the most exquisite wild Alaskan king salmon. The winner of the Mystery Box challenge was safe in the next elimination round, during which the home cooks needed to create a dish using a selection of one judges’ favorite ingredients. Elise was the chef to go home. Did you watch the last episode? If you missed it we have a full and detailed recap, right here for you.

On tonight’s episode, in the next team challenge, the remaining home cooks prepare romantic dinners for couples celebrating their anniversaries in the MASTERCHEF restaurant. While preparing for the main course, Gordon Ramsay introduces a special guest for the evening, his wife, who will be dining in with Ramsay that evening. The team that receives the most number of votes from the couples will be safe from elimination, while the losing team will have to face the next pressure test and create their own truffle recipes for a box of chocolates. Find out whose victory is sweet and who will be sent home.

RECAP: Tonight the two captains, Elizabeth (blue) and  Ahran (red) choose their teams who have to create incredibly romantic dishes. On team Ahran they are making lobster risotto and raspberry chocolate tiramisu, on team Elizabeth they are making filet mignon and salted caramel chocolate cake.

The master chef diners start to enter the dining room; all seats are full, except for one that will seat Gordon’s wife. Gordon has promised his wife a great dinner and warns the chefs that they better not disappoint her. Gordon and his wife were fairly happy with the lobster risotto, just one problem, his wife found that were too many onions in it. The filet mignon was a terrible disaster as the mean was too rare and not only for Gordon and his wife, but for a wife who is there celebrating her 65th anniversary with her husband. Mr. & Mrs. Ramsay were both not overly fond of the deserts.

The servers are going to hand out a check holder for the diners to cast their votes. This was a magical evening for everyone, but only one team can win. It is a landslide, with 75% of the votes, surprisingly team Christine (blue) wins. Team Ahran (red) lose and have to face off after they clean up.

It is time for the pressure test, Gordon tells them that the blue team had the favorite dishes; more than three quarters – very well done. The whole blue team is going to face the dreaded pressure test. The team has to create a box of 9 high end gourmet chocolate truffles. It’s time for the chefs to head to their stations and many of them look very nervous. They have 1 hour to make the truffles and they must have at least three different truffles in each box.

Time for the judges to taste the chocolates; Cutter gives his truffles a 7 or an 8, the judges loved them and Gordon said they looked like a professional level. Christian’s truffles get a pass, Willie’s truffles have a lot of color and too heavy handed with sprinkles according to Gordon, Ahran’s truffles are dense and could be lighter, Leslie’s ….are a disaster – they are all melted and sloppy. Gordon says Leslie’s truffles look moldy from his armpits; Gordon is clearly not impressed. Time for Christine’s truffles, bitter and disappointing. This was a very challenging pressure test and there are big decisions to make.

Cutter gets congratulated for his wonderfully delicious truffles and gets a pass, he goes join the red team on the balcony. The two people in the bottom two are Leslie and Christine. Gordon announces that Christine is being sent home and the judges are as shocked as she is. Leslie goes back up to the balcony. The bitterness in Leslie’s chocolates was just too much for the judges.