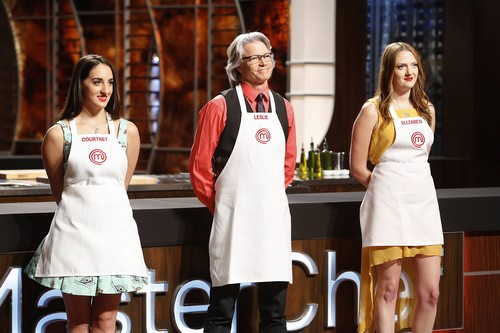 Tonight on FOX Masterchef returns with an all new Monday September 15, Season 5 Finale called, “Top 3 Compete; Winner Chosen.”  On tonight’s episode The fifth season ends as the Top 3 contestants (Elizabeth Cauvel, Leslie Gilliams and Courtney Lapresi) create dishes for a panel of judges from all 50 U.S. states. The winner earns an automatic spot in the Top 2, while the other two chefs face a pressure test involving desserts. Later, the winner is chosen after the Top 2 compete for the trophy, a book deal and a $250,000 grand prize.

On last week’s episode after the remaining home cooks were surprised with a few VIP guests in the kitchen, each home cook created a dish inspired by one of their loved ones. The home cook with the best dish was safe from elimination and moved on in the competition, while the remaining home cooks had to go with their guts as they prepared rare protein dishes and battle for a spot in the Top Four. Later, the judges announced a final team challenge that determined who advanced to the Top Three. Did you watch last week’s episode?  If you missed it we have a full and detailed recap, right here for you.

On tonight’s episode in the next challenge, with a little help from a few other home cooks, the remaining three contestants will create dishes for a judging panel of renowned chefs representing all 50 states. The home cook with the most number of votes will move on in the competition, while the remaining two home cooks will face the next pressure test, during which they must complete three classic American desserts. The home cook with the best desserts will move on to the finals. Later, in the final challenge in the MASTERCHEF kitchen, the Top Two home cooks will have one last chance to prove to the judges that they deserve the MASTERCHEF title. After evaluating the final dishes, the judges will reveal America’s next MASTERCHEF, and the deserving home cook will walk away with a MASTERCHEF trophy, a book deal and the $250,000 grand prize. Find out whose culinary dreams will turn into a reality.

Don’t forget to join us for our live recap tonight at 8:00pm when MasterChef Season Five on Fox airs. While you wait for the recap, let us know how you like the fifth season of MasterChef and who are you rooting to win tonight.

Tonight’s season finale of Master Chef kicks off with the final three chefs, Courtney, Elizabeth, and Leslie taking the stage. Chef Ramsey reveals to them that they have made it to the semi-finals, they will have to cook a very special dish for very special guests…professional chefs. Prepping and cooking for fifty professional chefs is nearly impossible, so they are going to need some help, previously eliminated chefs from the competition march in to the kitchen.

Each chef will choose two fortune cookies, and the paper inside will have the names of their assistants. Courtney’s assistants are Daniel and Willie, Leslie’s assistants are Ahran and Christian, and Elizabeth’s assistants are Jaimee and Victoria. Once the chefs get in to their groups, Chef Ramsey announces they have just ninety minutes to prepare their dishes for their guests. They rush to the kitchen and get to work.

Courtney’s team is preparing halibut with an Asian twist. Leslie’s team is working on a filet of steak, Elizabeth’s team is also working on a fish dish. The professional chefs begin arriving and taking their seats and contestants are star struck by some of the famous faces. Chef Ramsey has literally brought in fifty chefs, each one represents their own state.

There are only fifty minutes remaining, Chef Ramsey makes his rounds and checks in on the chefs in the kitchen. Elizabeth is preparing her Mediterranean snapper, Courtney boasts to Chef Ramsey that she is confident in her dish because she has planned it thoroughly. There are fifteen minutes remaining, and the chefs begin preparing their plates. Leslie catches paper towels on fire while he is rushing around and Chef Ramsey has to come to the rescue and put out the fire. Courtney’s team begins falling apart at crunch time and she screams at them to get the food on the plates, and tells them to “make it happen!”

Time is up, the chef’s dishes are passed out to their guests. Elizabeth, Leslie, and Courtney head to the dining area to explain their dishes to the top chefs tasting them. Courtney introduces her dish, a pan seared halibut glazed with ginger and soy with beet dashi vermicelli, served with a side of chili sauce. Leslie’s explains that his dish is a fliet mignon with herb gnocchi. Elizabeth’s dish is a pan seared red snapper with a cauliflower trio, including a purple cauliflower couscous. The chefs head back to the kitchen and give the chefs time to taste their dishes and score them.

Elizabeth’s cauliflower dish is a hit with the chefs. They are surprised that Leslie served steak with gnocchi. They are also impressed with how well Courtney cooked her halibut. The chefs fill out their score cards and they are tallied up. Leslie, Courtney, and Elizabeth return to the dining room and Chef Ramsey announces that the highest scoring chef of the night is Elizabeth. Leslie and Courtney take that stage and Chef Ramsey reveals that they must compete against each other tomorrow in the pressure test to see which one of them will go to the finals with Elizabeth.

The next day Leslie and Courtney return to the kitchen. Chef Ramsey reveals that in their pressure test they will have to make three desserts that “celebrate America.” They will have to prepare a New York cheesecake, key-lime pie, and a Boston crème pie. Leslie is already sweating, he’s not a baker. He and Courtney head to their stations and they have three hours to prepare the three dessert dishes.

Leslie and Courtney begin rushing around the kitchens. This is Leslie’s sixth pressure test, his luck may finally have run out though, because baking is Courtney’s forte. Elizabeth watches form the balcony over the kitchen and laughs at Courtney talking to herself in the kitchen and giving herself pep-talks. Leslie talks to himself too, but he’s more of a rambling mad man. Courtney’s cheese cake is already cooked, and Leslie hasn’t even put his in the oven yet.

Time is officially up and Courtney and Leslie put up their three desserts for the judges. Courtney’s cheese cake looks perfect and the judges rave that it is delicious. Leslie’s cheese cake unfortunately falls short, the crust is burnt though and the cheese portion of the cake is almost raw. Now it is time to present their key-lime pies. Courtney over blow-torched her pie and the judge says that it looks like smores, her pie is too sweet and doesn’t taste like there is any lime in it. Leslie’s key-lime pie is the clear winner, the judges say he “nailed it.” It’s up to the Boston Cream Pies to determine whether Courtney or Leslie are going to the finals. After carefully scrutinizing the pies, he announces that Leslie used salt instead of sugar in his pie, so Courtney is going to the finals. Leslie is officially eliminated from Master Chef.

Now it is time for Elizabeth and Courtney to battle it out in the finals to see who will be crowned the next Master Chef. For the finals challenge, they will have to prepare one appetizer, one main dish, and one dessert. After they prepare the dishes they will have to serve them in the dining-room to the three judges. They have ten minutes to race through the pantry and pick out their ingredients.

Elizabeth will be making a grilled octopus with chickpea salad for her appetizer. Courtney has decided to make a crispy pig ear and dandelion salad for her appetizer. They have one hour to prepare their appetizers and serve them to the judges, they begin racing around the kitchen. The judges watch from afar and are surprised Courtney is taking such a huge risk with the pig ear, they are even just as surprised that Elizabeth has decided to cook her octopus in a pressure cooker.

Time is up, Elizabeth and Courtney serve their dishes to the judges. Elizabeth’s dish is very strong, and the judges are impressed with her flavoring, but they think the octopus is a tad over-cooked. Over all Chef Ramsey says it was difficult to pull off, but she did. Courtney serves her crispy pig ear and salad, but the judges aren’t sure if it is enough to be considered an appetizer. However, the pepper sauce and quail egg impress the judges, and Chef Ramsey says her dish is “brilliant.” Courtney and Elizabeth head back to the kitchen to prep for their entrees while the judges discuss their appetizers.

Now, it is time to start the entrees, they have one hour to make the best main course they have ever made. Elizabeth is making sliced lamb with a mint sauce, and carrot puree. Courtney has decided to prepare a duck breast with spring vegetables. Courtney begins plating, and Elizabeth’s lamb is still in the oven, once again she is struggling with time. Time is up and they deliver their plates to the judges. The judges gush that Elizabeth’s dish is a knock-out, although there is some confusion about whether it is rare or medium rare. Courtney’s duck is a hit, and according to the judges it is the best dish she has ever prepared.

Now, it is time for Courtney and Elizabeth to prepare their final dishes, desserts. Elizabeth will be serving a grapefruit cake and olive oil trio, Elizabeth is preparing a cherry meringue with salted chocolate. They begin racing around the kitchen, and the stress takes a toll. Elizabeth’s cake appears undercooked and falls apart when she removes it form the oven. Courtney decides to taste one of the meringues to make sure they are done, but then she realizes that she is now down a meringue and doesn’t have enough for all of the judges.

Time is up and Courtney and Elizabeth have to serve their desserts to the judges. The judges aren’t happy with Courtney’s meringues’ appearance, but they think it is brilliant that she salted the cherries as well as the chocolate. Elizabeth serves her grapefruit olive oil cake, the judges gush that it is delicious and Chef Ramsey commends her that she cut the cake and didn’t serve the undercooked portion to them. The judges excuse Courtney and Elizabeth, so they can come to a decision as to who the winner is.

Now, it is time for the judges to announce who is the winner of this season of Master Chef, and a quarter million dollars. Right before the judges announce who the winner is, Elizabeth’s husband passes out on the stage. After the medic rushes over and her husband comes to, they go on with the ceremony.

Courtney and Elizabeth take the stage again, and Chef Ramsey announces that the winner of Master Chef is … Courtney.