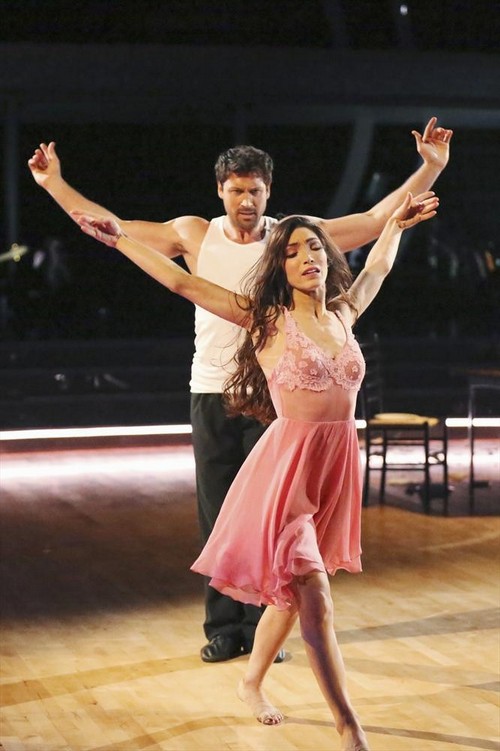 Olympic Ice Dancing Gold Medal winner Meryl Davis danced a Jazz dance, on tonight’s season 18 episode 9 of Dancing with the Stars with Maks Chmerkovskiy for their DWTS semi-final performance. Emmy Award winning director and choreographer Kenny Ortega makes his “Dancing With The Stars” debut as a guest judge on American Icons Night when he sits alongside Len Goodman, Bruno Tonioli and Carrie Ann Inaba  If you missed tonight’s show you can read a full and detailed recap, right here.

On last episode Meryl performed a Rumba and Carrie-Ann loved it saying, :   “Meryl you and Maks have this incredible chemistry.  Rumba is about continuous movement and it did not stop.  It was perfection, but there was not enough Rumba content.”   They scored Meryl 36/40.

Meryl Davis and professional dancer Maks Chmerkovskiy: dancing a Jazz.  Meryl has been getting ready for her dance tonight.  Meryl has not been saying much about her performance this week she is really busy with Stars On Ice.

Judges comments: Len: “No peril Meryl that was fantastic!”  Kenny: “You were ice skating tonight your kicks and flicks were sending spark up off the floor.” Bruno: “The King and Queen of Rock and Roll.  All the moves were perfect and stylistically it was perfect. perfect!” Carrie Ann: “First of Maks did you kiss me? Meryl what have you done you turned Maks into warm and fuzzy.  Meryl usually a jive everyone wear ornate costume to create more movement.  You didn’t do that and the dance was still perfect and looked perfect.”