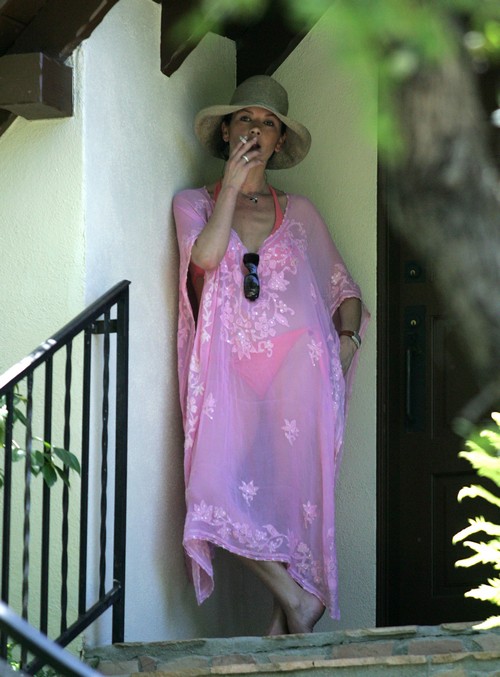 Catherine Zeta-Jones and Michael Douglas may have reunited earlier this year after a several month separation but that doesn’t mean that all of their divorce problems are cured. In fact a big issue keeps hanging over them – Catherine’s two-pack a day smoking habit. A few years ago Michael waged a successful battle with tongue/throat cancer and it was a life altering situation for the actor. Michael publicly implied Catherine was to blame for his cancer claiming that he got it from having oral sex with a woman with HPV. According to the July 14th print edition of The National Enquirer he is super sensitive to his wife’s smoking because he believes that she is ultimately playing Russian Roulette with her own health and his feelings

Sources say that Catherine has simply had an extremely hard time quitting and tries to minimize it by reminding Michael that she is currently healthy in every other aspect. Her mental issues are in check and apparently Catherine has laid off of the booze in recent months. No doubt in her mind cigarettes are nothing compared to those seemingly bigger issues but Michael has a reason to worry. He knows first hand how frightening and painful cancer can be.

Do you think that smoking will ultimately become one more thing that Catherine will overcome or is this the one thing that she will let slide? These two have battled through so many huge problems together, do you think something like a smoking habit could be what unravels them and causes divorce for real? Do you think that Catherine’s smoking could become a deal breaker for Michael or will he decide to continue living with the concern that he feels? Tell us your thoughts in the comments below!