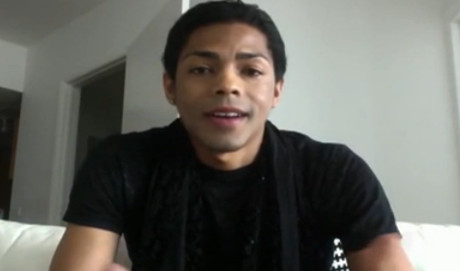 After an alleged DNA test provided a positive match to Michael Jackson, B Howard is being touted by some as being the legitimate son of The King of Pop. During the time of the unveiling, B Howard, who bears a striking resemblance to the late pop singer, wasn’t present — which has me wondering if this fellow is even on board with this campaign to probe into his history. In a video posted on TMZ, Brandon reveals that this crazy media storm isn’t his doing. He’s not looking for any more attention; he’s not suing the MJ estate; and he’s definitely working hard for the money he’s earning.

TMZ reports, “According to the test results — obtained by Alki David and his company, FilmOn.com — Brandon Howard is almost certainly Michael’s son.  David told TMZ Live he got MJ’s dental impression from a Beverly Hills doctor that he got at an auction.  The impression is 30 years old but David says its filled with DNA.”

If we’re to go off these alleged tests, then he really is MJ’s son. While nobody can know for sure, there’s an interesting story surrounding this scandal: MJ knew a woman named Miki Howard, known as “Billy” back in the day; he eventually released a song entitled “Billie Jean.” If you’re familiar with the lyrics, then you probably know that they harbor some great mystery, one that might be answered by this DNA test!

“Billie Jean’s not my lover” and “The kid is not my son.”

Brandon (who now goes by the name of B Howard) is trying to distance himself from the craziness. Watch the video below and see if his statements help or hurt his cause. Does he seem sincere? Is he merely the victim of yet another Michael Jackson scandal? You be the judge!

Here’s a shocker — the DNA test results that allegedly prove 31-year-old Brandon Howard is Michael Jackson’s son are BOGUS … in fact, so bogus … the logo from the so-called DNA testing lab was ripped from “Terminator Salvation.”

As we reported, FilmOn.com’s Alki David put on a spectacle Thursday — claiming he had DNA results proving singer B Howard was the biological son of the King of Pop. He then produced the results showing a “99.99999%” probability that MJ was Brandon’s dad.

TMZ obtained a photo of the DNA doc — allegedly from a testing facility in Ireland called “DNA Lab.” We searched high and low but could find no such generic DNA lab in Ireland.

Skeptical, we investigated — a simple Google image search of “DNA results” turns up a bunch of sample docs with the same exact easily-stealable format as the one we got.

But the coup de grace — we then Google image searched “DNA logo” and the first result … literally … was the same DNA pic used in the “DNA Lab” logo.