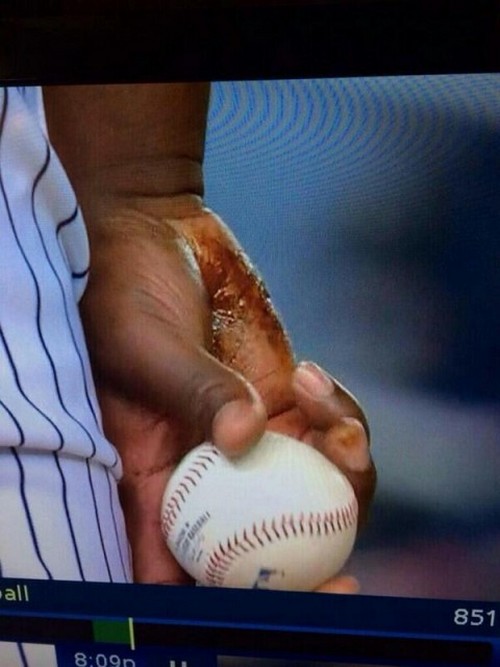 The Yankee’s aren’t exactly off to a great season and the last thing that they needed was for a player to be accused of cheating in any capacity, yet that is exactly what has happened. Michael Pineda is a young, up-and-coming pitcher that apparently has had a bit of a tough time gripping the ball. Rather than working on his skills he has resorted to using pine tar to help the situation. Nearly two weeks ago during a game against Boston’s Red Sox he was spotted with a foreign substance on the palm of his hand while pitching. He was ejected from the game and supposedly given a stern talking to.

Last night during another game against Boston Pineda had an obvious substance on the side of his neck that he later admitted was pine tar. He was once again ejected from the game and now a suspension of some kind is expected. The rule book states that players cannot have on his person or in his possession any type of foreign substance upon leaving the dugout.

So what exactly does pine tar do? Well, obviously it helped Pineda to get a better grip on the ball during chilly, finger numbing temperatures. It also throws the balance of the ball off very slightly making a good pitch go a little wild as it reaches the plate and that makes it damn hard to hit. The Yankees have kind of dismissed that this was a young guy cheating to get ahead and instead are trying to say that in Pineda’s head he was simply trying to be competitive. Isn’t that kind of the same thing? Will he be suspended and if so, how long do you guys think is appropriate? Tell us your thoughts in the comments below!