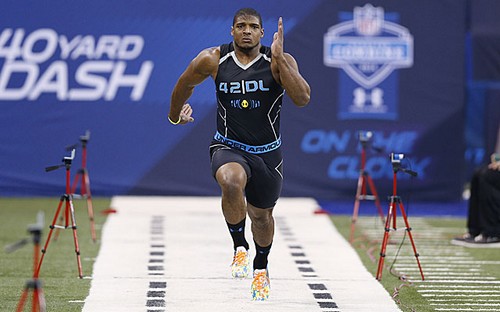 NFL hopeful Michael Sam’s alleged full frontal package is exposed in photos supposedly obtained by site we won’t name. The site is saying that Sam exclusively sent them this photo for reasons unknown and their entire story is probably fabricated. There isn’t much to say about the photos except that whomever the guy is he is, he is in very good in shape. That is literally the only thing to say about the photos. Why anyone would get excited about this is beyond me, OR is it possible that this website is trying to capitalize off the media circus surrounding SAMs by promising the world not just any dong but sensationalized first-openly-gay-nfl-draft-football-player-dong?

Is the dong of an openly gay football player any more or less interesting than the dong of a man who is not openly gay football player? We really don’t know what the site intends to accomplish by publishing this photo. Are they trying to insinuate that SAMs is a pervert because he allegedly took a naked picture? Do they not know that nude selfies are like a thing nowadays? Even if he is the man in the photo, and that is a dubious proposition at best, where is the story in that? A man with a great body wants someone to see his body so he takes a photo. The end. Even if it is him, it doesn’t make him a pervert who will violate your pet, it just makes him self absorbed and really aren’t we all?

Personally, The guy in the photo isn’t my type. He looks like a Magic Mike reject and he doesn’t have anything I’ve never seen before. I’m more of a Tim Tebow kinda girl myself. I’d totally go all Michelle Dugger and have like a passel of his beautiful athletic yet highly intelligent and insightful babies… but I digress. Back to the alleged nude photos of Sams that conveniently don’t show his face, yet we are STILL supposed to believe is Michael SAMs.

We here at CDL do not believe in the validity of these photos and we shake our fists at any medium that attempts to draw attention anyway from what is important and that is his ability to do his job- as a football player. Furthermore the attempt to sensationalize his package and set it apart from any other celebrity nude selfie is shameful and we don’t condone it. He’s a football player not a circus freak, people need to get that through their heads and stop acting like they’ve never seen a dong before.