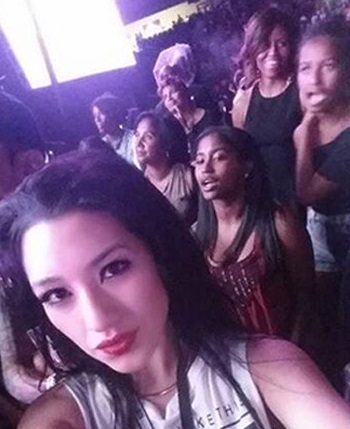 Michelle Obama and her two daughters, Sasha and Malia, were photographed out and about recently — and let’s just say they were getting their groove on. The three ladies decided to get out of that stuffy old White House for a bit and attend a Beyonce and Jay-Z concert. The concert took place in Soldier Field in Chicago and the venue was packed — not ideal for a group of public figures aiming to blend in. The ladies were captured in a young woman’s selfie.

In the photo, we see Sasha and Malia having a grand ol’ time and their chaperon, Michelle, doesn’t seem to be having a horrible time either. They all seemed to enjoy watching the Queen B and her hubby tear up the stage, but some people are surprised that this photo was allowed to stay up in the public domain, as the White House is doing everything in their power to make sure the girls stay out of the public’s eyes as much as possible.

While Michelle called a photo agency earlier this month to get rid of a photo of her girls entering a popular restaurant, it doesn’t seem like there’s much she can do about this one, as the girl who took the photo wasn’t doing anything wrong. It was totally acceptable for her to take a selfie; after all, it was a public space — a public space that just so happened to be filled with three VERY important people.

What do you make of Sasha, Malia, and the First Lady attending this concert? Leave your thoughts in the comments section below!