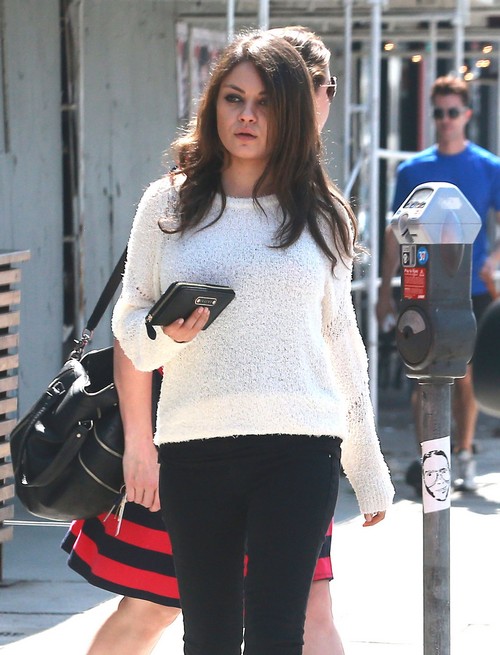 It doesn’t take too much nowadays for pregnancy rumors to begin. The second a celebrity couple announces their engagement we all start keeping an eye on things to see if a baby bump could be behind the announcement. Mila Kunis and Ashton Kutcher have been dating for two years now after years of being just friends and they just finally confirmed that vows are in their near future. As far back as last September Mila was spotted sporting a suspicious ring so this is one of those engagements that probably didn’t surprise anyone.

But could Mila be pregnant too? She is hardly a big girl to begin with but in recent weeks she has looked a little fuller than usual leading to speculation that baby news might be next for these two. That wouldn’t be too surprising either. Ashton’s divorce from Demi Moore seems to have been an obstacle that really kept his relationship with Mila from progressing faster. That was exactly what Demi wanted- to keep him tangled and it worked for about 18 months until the two finally reached an agreement. Ashton has been rumored to have wanted kids for awhile now anyway so it’s very possible that Mila is already pregnant.

Take a look at these pics and tell us what you think. There is no glaring baby bump, but she’s not

Mila Kunis enjoys a fetus-friendly lunch at RFD before doing some shopping with a servant on March 14, 2014 in Los Angeles – see the puffy pregant look?

UPDATE: According to E! MILA IS PREGNANT – congratulations to Mila and Ashton