Miley Cyrus Quits Cigarette Smoking But Won’t Be Giving Up Her Pot And Molly Anytime Soon! 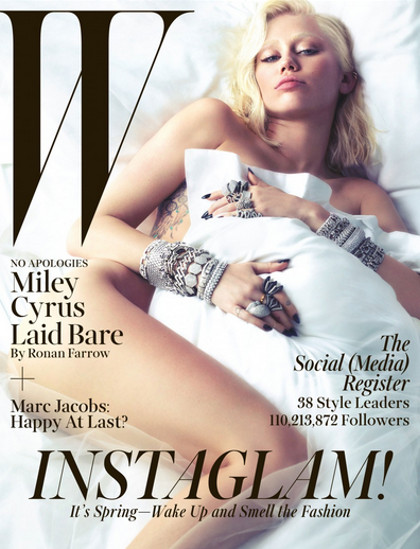 In case you missed it, Miley Cyrus made an important announcement yesterday. She has decided to stop smoking. Not weed though. She still plans to get high. However, the 21-year-old used Twitter to give the world a health update. “2 months no cigs.” She was, rightfully so, “#proudofmyself.”

It’s a great decision for the “Adore You” singer who is about to begin her world tour in a few weeks. Miley may like to be controversial and make headlines, but she actually does have a really good voice. She’s definitely better than some other popular artists and I don’t want her to ruin that with years of smoking.

However, don’t expect Miley to give up weed anytime soon. She recently opened up about her love for the herb in the March issue of W magazine. “I love weed. I just love getting stoned. I just want it to be back to where it’s, like, organic, good weed.”

“I think weed is the best drug on earth. One time I smoked a joint with peyote in it, and I saw a wolf howling at the moon,” she told Rolling Stone last year. But she was quick to point out that she does not do harder drugs, like cocaine, and doesn’t even drink that much.

“Hollywood is a coke town, but weed is so much better. And molly, too. Those are happy drugs—social drugs. They make you want to be with friends. You’re out in the open. You’re not in a bathroom. I really don’t like coke. It’s so gross and so dark. It’s like what are you, from the ’90s? Ew.”

I guess that means she’s at least tried coke before. Seriously, Disney must truly be the happiest place on earth. All of their superstars party hard at some point or another. Joe Jonas already admitted Miley and Demi Lovato first introduced him to weed years ago. We are glad Miley decided to quit smoking . . . for now. Let’s see how long the “no smoking” policy lasts. Do you think Miley will eventually start using harder drugs or is she slowly moving away from the anti-Disney/shock value sensation persona?