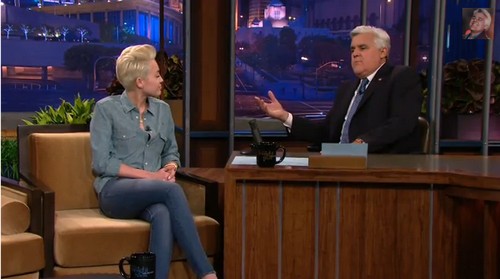 Miley Cyrus may have been twerking with Madonna on her MTV Unplugged special, but don’t let the gimmicks fool you. The girl can actually be a little wise when she wants to and she’s giving Justin Bieber some advice.

“You’ve got a lot of money. Pay people to make sure you don’t get in trouble and party at your house. Buy a house, and add a club to it,” Miley advised the troubled singer when she visited Jay Leno last night.

Justin has had several run ins with the law over the past few weeks. He was investigated for causing $20,000 worth of damage to his neighbor’s house, arrested in Miami for driving under the influence and drag racing, and was even charged for assaulting a limo driver in Canada. Although he pleaded not guilty to the Miami charges and evidence shows he may actually be innocent, people are getting fed up with the 19-year-old. A White House petition has even received more than 200,000 signatures to revoke his green card and deport him back to Canada.

This is not the first time she’s tried to help Justin. “I do mentor him in a way. Because I’ve been doing this s–t for a long time, and I already transitioned, and I don’t think he’s quite done it yet,” the 21-year-old told Rolling Stone last August.

Um, so what’s Lindsay Lohan’s excuse? She might need to take Miley advice as well. She might make headlines, but the cops have never been after her.Miley’s fans realized that out of all the young Hollywood mug shots, Miley’s face is not one of them… yet. “I get the most flak of anybody. I’m not doing anything illegal! I’m doing a lot of s–t but I’m not doing anything illegal! So that’s all right. Everything I do is legal in California,” she noted on Leno.

Is Miley Cyrus secretly the wisest star in young Hollywood? She gave JB some good advice but he doesn’t need to pay people to keep him out of trouble or build a club in his house. Justin needs to stop surrounding himself around people who are just using him and feeding into his ego. I’m talking to you Jeremy Bieber.

What are your thoughts? Join the conversation and leave a comment.