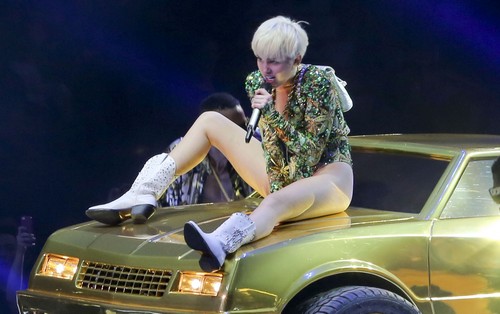 When Miley Cyrus was admitted to the hospital recently her handlers insisted that she had fallen victim to a severe allergic reaction to an antibiotic that she had been taking for a sinus infection. Any one who has ever had a medication induced allergic reaction will tell you that treatment usually includes a heavy duty steroid and at worst an IV filled with meds to offset the reaction – hospitalization for a week is kind of unheard of. It’s tough to get admitted to the hospital and even harder to be granted an extended stay so right from the start this Miley story smelled funny.

According to the May 5th print edition of Star Magazine even Miley’s friends seem to agree. They are running on the notion that Miley’s hard-partying lifestyle caused her body to finally collapse and that she was actually undergoing some sort of detox program. There also is another possibility. She very well could have had a sinus infection and even an allergic reaction. Given Miley’s inability to stop partying doctor’s could have admitted her to make sure that she didn’t use any other drugs that could have negatively interacted with the antibiotics that she needed.

Do you think that Miley was actually in need of detox for one reason or another and that it was part of the reason that she was hospitalized? How about the story about her having an allergic reaction? Have you bought it from the beginning or do you think that an awful lot has been hidden from the media? Miley has bragged all over the Internet and in interviews about her drug use and how wonderful she thinks drugs are. Do you think after her recent hospitalization she might wise up?

Update: just a reminder that the statement released by Miley’s handlers after her ’emergency’ admittance to hospital was:

“She was prescribed the antibiotic Cephalexin which she has now suffered an extreme allergic reaction to. This type of extreme reaction can last from five to 27 days in these types of cases. She will remain hospitalized and is under a doctor’s care until we see some improvement in her condition and is asking for your compassion and privacy at this time.”

I looked up the allegedly offending drug Cephalexin (Wiki) and in extremely rare circumstances it has been known to cause anaphylaxis. However this occurs in less than 1 in 1000 people and is the only adverse side effect of Cephalexin which would require emergency hospitalization.

The most common adverse effects of cefalexin, like other oral cephalosporins, are gastrointestinal disturbances and hypersensitivity reactions. Gastrointestinal disturbances include nausea, vomiting, and diarrhea. Hypersensitivity reactions include skin rashes, urticaria, fever, and anaphylaxis. Pseudomembranous colitis has been reported with use of cephalexin.

Symptoms of an allergic reaction include rash, itching, swelling, trouble breathing, or red, blistered, swollen or peeling skin. Overall, cefalexin allergy occurs in less than 0.1% of patients, but it is seen in 1% to 10% of patients with a penicillin allergy

But here is the rub, even if Miley did experience anaphylaxis as a consequence of taking Cephalexin, the maximum period of hospitalization would be 24 hours! From wiki:

“A period of in-hospital observation for between 2 and 24 hours is recommended for people once they have returned to normal due to concerns of biphasic anaphylaxis.“

So CDL readers, you decide. Does the available evidence support the claim by Miley’s people that she was in hospital for an allergic reaction? Let us know in the comments.