Miley Cyrus Dumped by Kellan Lutz and Demands to Know Why Men Can’t Love Her! (PHOTO) 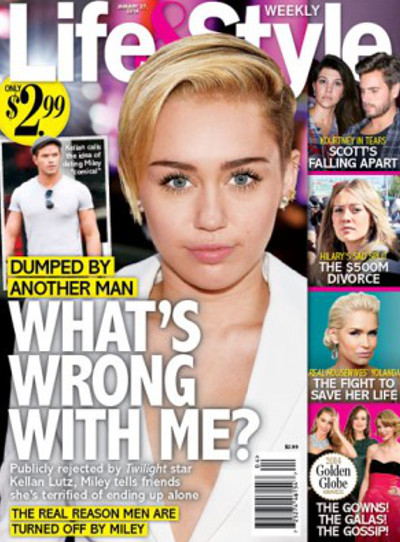 Some people want to believe very badly that Kellan Lutz and Miley Cyrus were actually an item; and now there are reports claiming that Miley and Kellan were not only together but that Kellan recently called it quits with her. Kellan himself has laughed off the rumors regarding his “relationship” with Miley and, while we’re never one to take a celeb’s word as the truth, I think it’s safe to say that Kellan and Miley were never really a serious thing. They’ve been spotted multiple times together, boarding private jets and at parties, but it’s hard for me to believe that Kellan would ever want to risk being with someone so volatile (where the media’s concerned).

Life & Style claims, “Despite Kellan’s denials, friends say the two were definitely an item and had hooked up for months. So Miley was hurt and humiliated to learn that once again, a man she cared about wants nothing to do with her.” The magazine says that she has absolutely no self awareness and adds, “She’d love to be in a relationship — she worries she’ll never find someone who loves her for who she is — but she’s totally unaware of why guys dump her.”

What do you think about this story? Do you think Kellan and Miley were ever together? If so, do you think Kellan finally realized exactly what he was getting himself into and decided to pull the plug on their romance before things got too out of hand and his image took the toll? Leave your thoughts in the comments section below, we’d love to hear from you, and make sure to grab this edition of the magazine ASAP!